Before polls, Modi thrust on temple 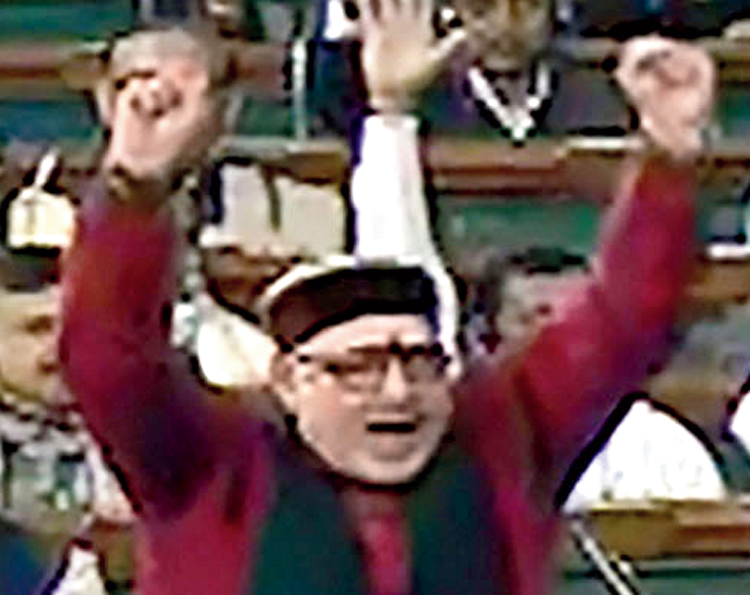 Prime Minister Narendra Modi on Wednesday announced in Parliament the formation of a trust to build a “bhavya (grand)” and “divya (divine)” Ram temple in Ayodhya, with the BJP and its allies erupting in chants of “Jai Shri Ram” and thumping of desks.

The grandstanding over what should have been a routine directive was mounted three days before Delhi votes.

Soon after the Prime Minister’s announcement in Parliament, the Yogi Adityanath government in Uttar Pradesh decided to hand over to the Sunni Central Wakf Board five acres around 24km away from the disputed site. The 5 acres are part of government farmland in Raunahi, a panchayat area in Ayodhya.

Although Modi was taking forward the cabinet’s decision earlier in the day to fulfil the Supreme Court’s directive in the November 9, 2019, ruling in the Ram Janmabhoomi-Babri Masjid case to set up the trust to build the temple at the site, the Prime Minister chose to make a show out of it.

The Supreme Court-mandated three-month deadline for the formation of the trust ends on February 9, a day after Delhi votes.

The Election Commission swiftly ruled out any violation of the model code of conduct in the announcement.

Giving the impression that he would make a big announcement and take everyone by surprise, Modi rose as soon as the Lok Sabha assembled for the day at 11am. “Main aaj aapke beech desh ke liye bahut mahatwapurn aur aitehasik vishay par jaankari dene ke liye vishesh taur par upasthit hoon (Today I’m amidst you to inform you about a very important and historic issue for the country),” he began.

“This issue, like crores of countrymen, is also very close to my heart and I consider it my big good fortune to talk about it,” Modi added, lengthening the suspense.

The BJP leader went on to inform the House that the issue deals with “Shri Ram Janmabhoomi” and the construction of a “bhavya” temple to “Bhagwan Ram” at Ayodhya, the birthplace of “Shri Ram”. The treasury benches burst into chants of “Jai Shri Ram”.

In his nearly 10-minute address, Modi kept on stressing on the words “Shri Ram”, “Bhagwan Ram” and “bhavya aur divya Ram mandir” and how the Supreme Court had bestowed the title of the disputed land to “Ramlalla Virajman (infant Ram)”.

The Prime Minister announced that the cabinet had approved the formation of an independent trust named the “Shri Ram Janmabhoomi Teerth Kshetra”.

The decision to pick up the routine cabinet decision and announce it on the floor of the Lok Sabha left little doubt that it was done with an eye on the Delhi Assembly elections scheduled for Saturday.

The Prime Minister’s announcement came against the backdrop of a communally charged campaign being run by the BJP in the national capital that is witnessing an unprecedented ferment over the new citizenship matrix.

Both Modi and Union home minister Amit Shah have in their campaign speeches tapped into the Ram temple issue to stoke Hindu sentiments while accusing the Opposition of obstructing the resolution of the decades-old dispute.

That Modi was trying to reach out to the Delhi voters was clear as the Prime Minister repeatedly stressed on the importance of Ram for Indians.

“Respected Speaker, in India’s life breath, in India’s ideals, in India’s traditions, the importance of Lord Shri Ram and the historicity and purity of Ayodhya are things that we are all well aware of,” he said.

Modi said the cabinet, as directed by the Supreme Court, had decided to transfer the entire 67.703 acres of disputed land to the Shri Ram Janmabhoomi Teerth Kshetra trust.

The Prime Minister praised the “maturity” displayed by the country in maintaining peace and harmony following the Supreme Court verdict and saluted the people. Modi also hailed the multi-religious character of the people and said “Hindus, Muslims… are members of one big family”.