Advertisement
Home / India / Before Howdy, a boycott call in Houston

Before Howdy, a boycott call in Houston 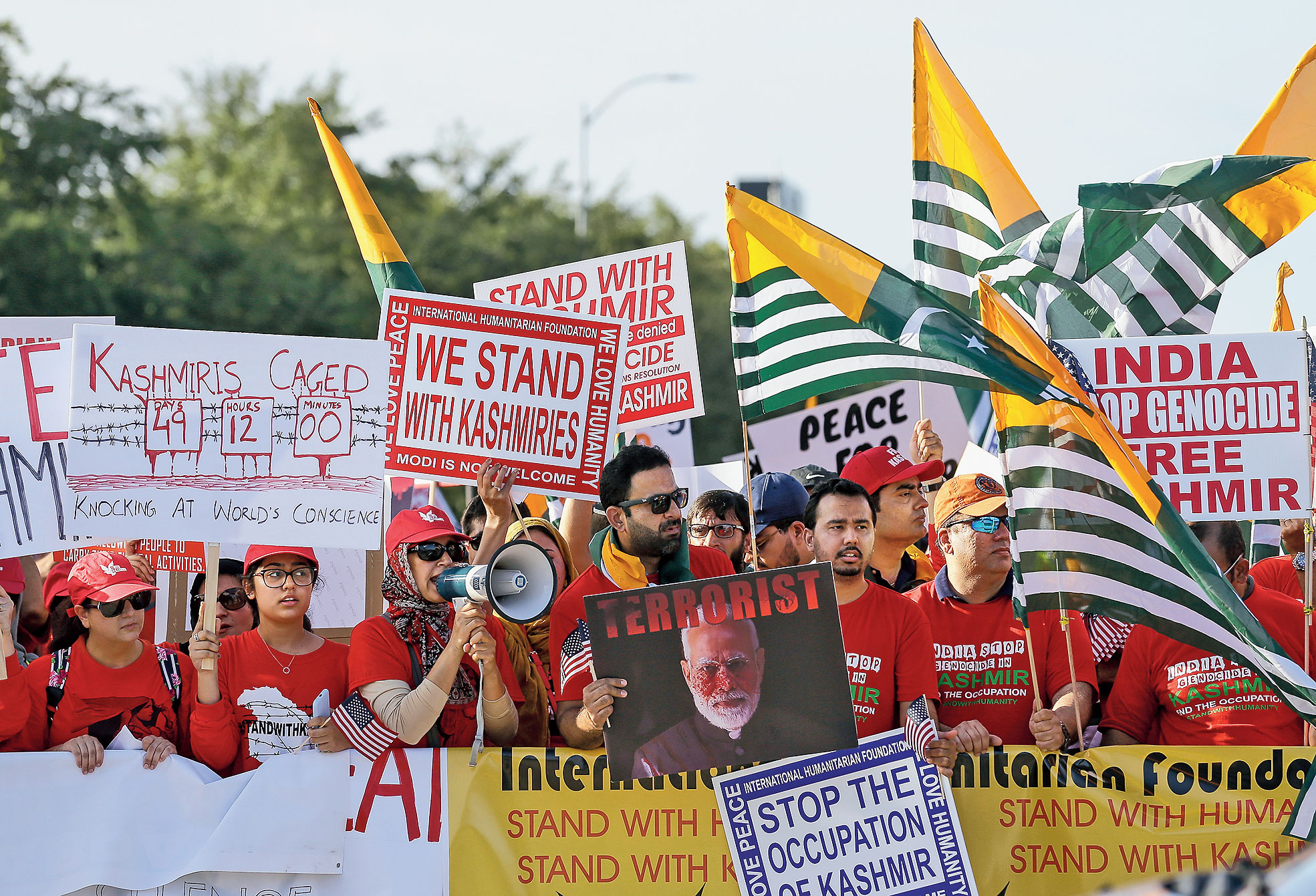 On September 17, five days before Prime Minister Narendra Modi addressed a gathering of half a lakh Indian-origin people in Houston, several groups protested in the city demanding that the community boycott the “Howdy, Modi” event.

One of the protesters at the Houston City Council, Pieter Friedrich, a California-based journalist who has probed India’s Hindutva groups, told the civic body that they would be complicit in Modi’s “crimes” if they would welcome him.

“In Norway, terrorist Anders Breivik left a manifesto that describes how he was inspired by other extremist and nationalist groups around the globe. Breivik pointed to the RSS in India,” Friedrich said.

“He praised the ‘Right-wing Hindu nationalism’ of the RSS and its goal of making India a ‘Hindu nation’. He praised the RSS for how they dominate the streets… and often riot and attack Muslims,” the journalist added.

“He said the goals of white supremacists and the RSS are ‘identical’ and that they should ‘learn from each other and cooperate as much as possible’. The RSS is a fascist paramilitary founded in 1925 — the same year that Hitler published Mein Kampf. The RSS developed with inspiration from the Nazis. And it produced Narendra Modi,” Friedrich said.

He referred to Breivik’s 1,518-page manifesto before the lone-wolf terror attack in 2011 that killed 77 people in Norway. In the manifesto — “2083: A European Declaration of Independence” — Breivik says this about the RSS: “The thing is, Indian government (current government United Progressive Alliance coalition led by Indian National Congress) is a Socialist-Leftist Liberalists. The other side is National Democratic Alliance led by Bharatiya Janata Party (BJP), a political arm to the RSS: these people are of Hindu right wing nationalism comprising of Hindu parties (including Sikh, Buddhist, and Jain sub-sects), strongly supported by Jewish and Zoroastrian minorities.”

The manifesto lists the BJP, RSS, Akhil Bharatiya Vidyarthi Parishad and the Vishwa Hindu Parishad as “anti-immigration parties/orgs — Nationalist parties/orgs”. The manifesto also praises the “Hindu right wing” for dominating the streets, and adds that “European and Indian resistance movements” should cooperate as their goals are identical.

During the September 17 protest, Friedrich blamed Modi for the 2002 Gujarat riots and presented a file with information on the Indian leader and the RSS to all 16 councillors of Houston City.

“Modi’s hands are stained with blood. Those who shake his hand in welcome cannot wash their hands of complicity in his crimes,” Friedrich concluded, making him a red rag for Hindutva nationalists online.

In a conversation on Twitter with The Telegraph, Friedrich, who has also lived in India, said: “My interest in South Asia starts with my experience with South Asian immigrants in America…. Other than cultural factors, the Indian State has largely orchestrated several atrocities against minorities after independence — both the BJP and the Congress. However, all these forms of repression consolidated in a more aggravated manner under the present Hindutva-oriented BJP regime.”

He added: “My first introduction to South Asian civil rights struggles was through Ambedkar’s writings. I ended up reading his books, writing about him, speaking about him. I spoke at Columbia University in 2013 in honour of the 100th anniversary of Ambedkar arriving to study at the university. I then discovered and was further influenced by Kabir, Ravidas, Guru Nanak, Guru Arjan, Phule and others.”

Recently, Friedrich authored a long investigative report in The Caravan magazine on how Hindu groups in the US that were linked to the RSS were funding Democratic hopeful Tulsi Gabbard. He also started a petition in July calling for the recall of Germany’s ambassador to India, Walter Lindner, after he visited the RSS headquarters in Nagpur.

“When Modi came to power, I couldn’t help noticing the tension and unease that his election caused among the Indian minorities in the diaspora…. I first protested Modi in 2015 when he visited my home state of California. Around 3,000 people protested (against) him that day. I remember how diverse the protesters were. I also remember being assaulted by Modi supporters — including how my signs were stolen twice and one very large man repeatedly touched and shoved me and told me, ‘I will break you’,” Friedrich said.

The journalist added: “When I look at India, I see how Modi’s regime has created an atmosphere of fear and silence. He is crushing dissent, denying basic human rights, even discussing a one-party system. Modi is a disaster for democracy. It’s important for anyone in the world who supports freedom and democracy to stand up against Modi.

“My interactions after the protests… I have had an outpouring of support from thousands of US-based Indians, including Hindus, Muslims and Christians. I’ve had many people thanking me for my work. I’ve also had a number of offensive comments… people calling me ‘rice-bag’, or ‘jihadi’ or ‘communist’.

“Also, before, I have extensively interacted with migrant communities from South Asia. Their narratives of resistance and survival left deep impressions on me about South Asian politics. This has shaped my concern about minorities in India.”

Friedrich has written two books — Gandhi: Racist or Revolutionary and Captivating the Simple-Hearted. The second book is on Sikhism and the creation of a casteless society.

On his website, Friedrich — always seen in photos wearing a flat cap that covers his eyes — describes himself as an author specialising in analysis of historical and current affairs in South Asia.

Friedrich told this paper: “People constantly tell me to shut up, or accuse me of being ‘Hinduphobic’ — even though I’m talking about the RSS, not Hinduism. I’ve had people accuse me of violence even while I’m speaking against violence by all parties…

“One person wrote threatening to reveal the addresses of my family. There are unlimited number of threats and intimidation. I don’t feel safe, I don’t feel free, I feel systematically targeted. It just shows the intolerance and violence of Hindutva groups and how fascist they truly are.”

Friedrich is as much an opponent of Mahatma Gandhi as he is of the Hindutva Right. Across the US, Friedrich has spoken at demonstrations for the removal of Mahatma Gandhi’s statues and busts and their installation.

“The centrality given to Gandhi’s role in India’s independence has unfortunately not left space to criticise his views on race and caste. Many communities throughout India feel that Gandhi’s actions actually harmed them. And not just in India. I’ve seen Africans in Ghana successfully rise up to topple a Gandhi statue because of his racism against black people. I am not currently involved in any opposition to Gandhi’s commemoration, though I continue to philosophically oppose it. I believe Ambedkar, not Gandhi, should be commemorated as the civil rights champion of India,” Friedrich said.