This year, the government made the decision to interchange the hymn Abide with Me with the C Ramachandra composed, 'Ae Mere Watan Ke Logon' 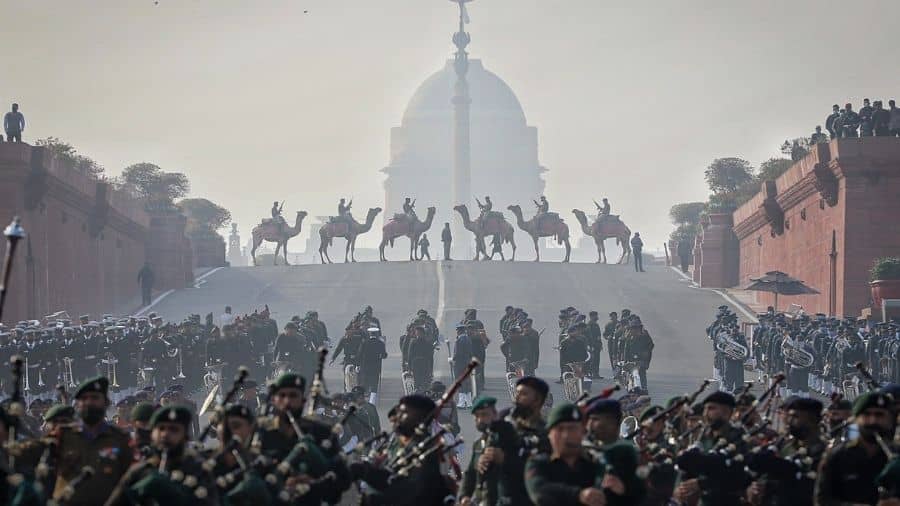 The Beating Retreat ceremony was held at Vijay Chowk in the capital on Saturday marking the official end of the 73rd Republic Day celebration, according to msn.com.

The event has been the norm for more than 70 years. Prime Minister Narendra Modi, President Ram Nath Kovind, Defence Minister Rajnath Singh were among the attendees.

The Beating Retreat Ceremony is a bit different this year as the nation celebrates the ‘Azadi Ka Amrut Mahotsav’, commemorating 75 years of independence. The musical troop of the Indian Armed Forces included 44 buglers, 75 drummers, and 16 trumpeters as they chime in sync and play 26 tunes.

This year, the government made the decision to interchange the hymn ‘Abide with Me’ with the C Ramachandra composed, ‘Ae Mere Watan Ke Logon.’ The tune was played, however, with a twist, as the new performance incorporated bell chimes similar to that of the hymn ‘Abide With Me’. ‘Ae Mere Watan Ke Logon’ song, commemorating Indian soldiers who died during the Sino-Indian War in 1962, was arranged for Military band by Maj SR Bhusal. In addition, no Bollywood tunes were included in the discography of the Beating Retreat Ceremony 2022.

Apart from the changes in tunes, there is a special addition to the ceremony. The ceremony also included a light and sound show, using laser projections and narration in Hindi, celebrating India’s rich history and the 75 years of Independence. Around 1,000 drones lit up the sky and put on a mesmerising laser show for the guests. The laser show is being organised by a start-up called Botlab, which, in association with the Defence Ministry, has geared up the drones to put together a marvellous show of lights.