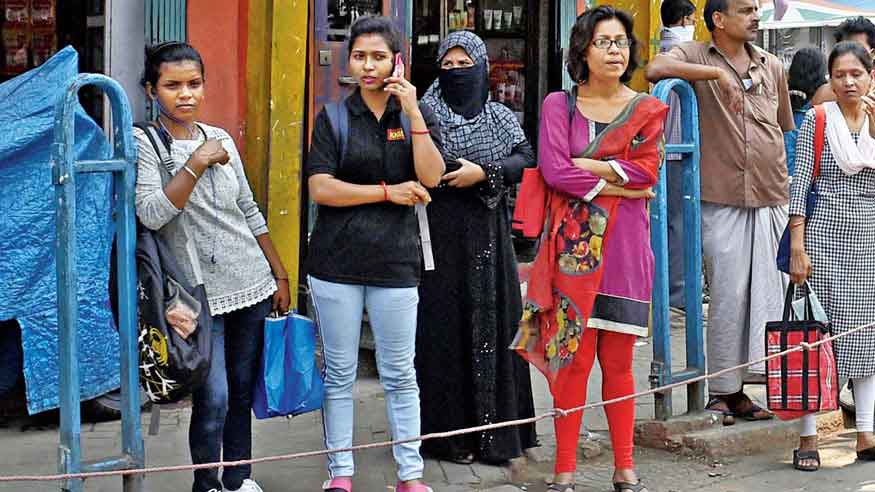 Social gatherings can escalate cases in view of the emergence of the Omicron variant
File Picture
Our Special Correspondent   |   New Delhi   |   Published 12.12.21, 01:47 AM

Health secretary Rajesh Bhushan, in a note to the chief secretaries of all the states, said the districts should initiate local containment interventions if test positivity rates cross 10 per cent and critical care bed occupancy exceeds 60 per cent.

The test positivity rate is the proportion of positive results among those tested. It’s a key measure of the size of the epidemic and needs to be as low as possible — ideally below 2 per cent.

A high positivity rate signals either a large epidemic or insufficient diagnostic testing.

Nine of the remaining 18 are in Kerala, five in Mizoram, and one each are in Arunachal Pradesh, Manipur, Nagaland and Puducherry.

Eight other districts — Kozhikode and Thiruvananthapuram in Kerala, Hnahthial, Serchhip, Champai, Lunglei and Lwangtlai in Mizoram and Sikkim’s South district — have test positivity rates of 10 per cent or higher.

The health ministry’s note urges district authorities to look out for fresh clusters of cases and initiate “intensive action and local containment” if needed.

The note comes amid uncertainty over whether and how the fast-spreading omicron variant might impact the course of India’s epidemic. Health authorities had until Friday detected 32 Omicron-infected patients - all mild - and said Omicron had not caused any clusters in India yet.

“Local surveillance and containment actions could help avert runaway surges,” said an epidemiologist at a government research institution. “This could in turn keep the numbers of daily new infections within the limits of available hospital resources.”

“They’re taking a cautious approach this time -- which is good,” said Oommen John, a physician and research fellow at The George Institute for Global Health, New Delhi.

“They’ve asked all districts to be on high alert even while our overall epidemic appears stable for now.”

India’s daily new Covid-19 infections have remained steady below 10,000 over the past two weeks, after a near-steady decline since the second wave’s peak daily count of over 400,000 in early May.

The ministry had similarly directed states to adopt the 10 per cent test positivity and 60 per cent critical care occupancy rates as thresholds to initiate local containment actions on April 25 this year. But health experts said the April 25 note was too late to avert the second wave.

Saturday’s note from the ministry iterated the need for district surveillance units across the country to ramp up surveillance and Covid-19 testing of patients with influenza-like illness and severe acute respiratory infections.

Health officials had said on Friday that none of the around 70 clusters of infections investigated in the country over the past two weeks had been driven by omicron. But health researchers have said that detection of omicron hinges on sampling and surveillance efficiency.

Preliminary studies from other countries have found that omicron carries a three-to-eight-fold higher risk of causing re-infections in previously infected people. Lab studies have indicated that omicron also has some ability to evade vaccine-induced antibodies.

Wait too long on booster and it'll be too late, top virologist warns govt