Advertisement
Home / India / Ayodhya case verdict: Was it a mosque? Supreme Court leaves it to Muslims

Ayodhya case verdict: Was it a mosque? Supreme Court leaves it to Muslims

Must defer to the safer course of accepting the faith and belief of the worshipper: SC 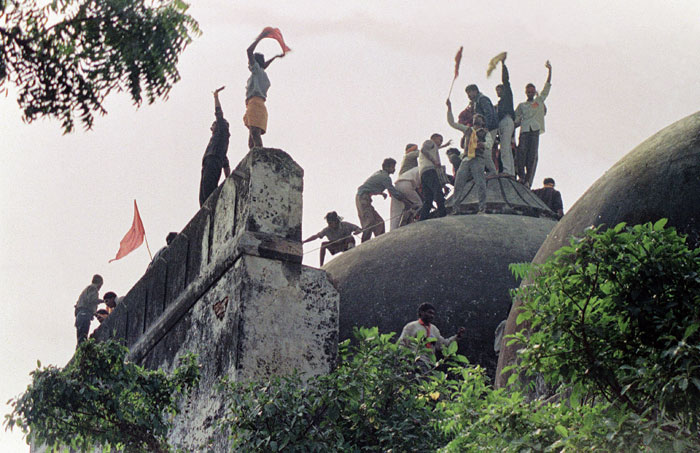 The Supreme Court on Saturday asserted that the question whether a particular place is a mosque is better left to the faith of Muslim worshippers, something that it said cannot be judicially challenged.

While saying this, it rejected the claim of the Hindu parties in the Ayodhya dispute that the Babri Masjid could not be considered a mosque since, according to them, no namaz had been offered there for years.

The apex court also noted that there had been a series of attacks on the mosque since 1934, capped by its destruction on December 6, 1992, which it described as “an egregious violation of the rule of law” and a “wrong (that) must be remedied”.

“The belief and faith of the worshipper in offering namaz at a place which is for the worshipper a mosque cannot be challenged. It would be preposterous for this court to question it on the ground that a true Muslim would not offer prayer in a place which does not meet an extreme interpretation of doctrine selectively advanced by Mr Mishra (for the Hindu Mahasabha),” Saturday’s judgment said.

“This court, as a secular institution set up under a constitutional regime, must steer clear from choosing one among many possible interpretations of theological doctrine and must defer to the safer course of accepting the faith and belief of the worshipper.

“Above all, the practice of religion, Islam being no exception, varies according to the culture and social context. That indeed is the strength of our plural society.

“In a country like ours where contesting claims over property by religious communities are inevitable, our courts cannot reduce questions of title, which fall firmly within the secular domain and outside the rubric of religion, to a question of which community’s faith is stronger.”

The bench recalled that because of the frequent skirmishes between Hindus and Muslims at the disputed site, the then British rulers had installed a grill railing in 1857 dividing the plot into inner and outer courtyards.

This, it said, was an indication that the Muslims did offer uninterrupted namaz at the place. The Muslims were allotted the inner courtyard and the Hindus the outer courtyard.

The court said there was evidence that Muslims did offer namaz at the site, at least since 1857, and so the claim that no namaz was offered at the place ought to be rejected. Rather, the bench said, it was an instance of a mosque being vandalised by Hindus.

“After the construction of the grill-brick wall in 1857, there is evidence on record to show the exclusive and unimpeded possession of the Hindus and the offering of worship in the outer courtyard. Entry into the three-domed structure was possible only by seeking access through either of the two doors on the eastern and northern sides of the outer courtyard, which were under the control of the Hindu devotees,” the judgment said.

“On a preponderance of probabilities, there is no evidence to establish that the Muslims abandoned the mosque or ceased to perform namaz in spite of the contestation over their possession of the inner courtyard after 1858. Oral evidence indicates the continuation of namaz.

“The contestation over the possession of the inner courtyard became the centre of the communal conflict of 1934, during… which the domes of the mosque sustained damage as did the structure. The repair and renovation of the mosque at the expense of the British administration through the agency of a Muslim contractor is indicative that despite the disputes between the two communities, the structure of the mosque continued to exist, as did the assertion of the Muslims of their right to pray.

“Namaz appears to have been offered within the mosque after 1934 though, by the time of incident of 22/23 December 1949, only Friday namaz was being offered.

“The reports of the wakf inspector of December 1949 indicate that the sadhus and bairagis who worshipped and resided in the outer courtyard obstructed Muslims from passing through the courtyard, which was under their control, for namaz within the mosque.

“On the night between 22/23 December 1949, when a group of 50 to 60 persons installed idols on the pulpit of the mosque below the central dome. This led to the desecration of the mosque and the ouster of the Muslims otherwise than by the due process of law. The inner courtyard was thereafter attached… on 29 December 1949 and the receiver took possession.