Axe hangs on right to protest at DU

On October 4, the UGC issued a notification saying the HRD ministry asked it to set up a working group to study if exams, teaching, learning, evaluation could be under ESMA 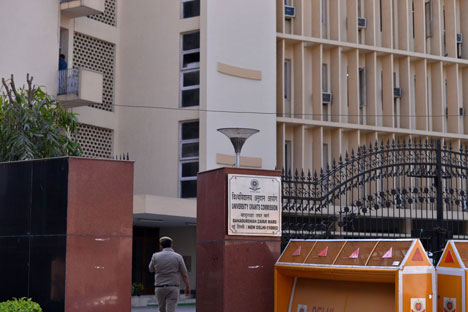 The NDA government has moved to bring classes, exams and paper evaluation at Delhi University under the Essential Services Maintenance Act, which would allow teachers to be imprisoned for holding strikes.

The Delhi University Teachers Association and a smaller group, Academics for Action and Development, on Thursday condemned the move by the human resource development ministry as an effort to “crush dissent” and silence the academic community.

Five months earlier, the University Grants Commission — the higher education regulator — had issued a circular to the central universities asking them to adopt the central government’s service rules for faculty if they considered their own rules inadequate.

Adoption of the Central Civil Services (Conduct) Rules, 1964, by an academic institution would mean its teachers cannot publish papers that include or imply criticism of government policies. The academic council at Jawaharlal Nehru University discussed the circular recently.

“The move to bring academic activities under ESMA will prevent faculty from holding any agitation or instigating any colleague to join a strike on any academic or other issue,” Academics for Action and Development chairperson Aditya Narayan Misra, who teaches at Sri Aurobindo College, told a news conference.

“They will face a non-bailable warrant. The right to protest and dissent will be taken away completely.”

He said the circular to central universities to adopt government service rules was aimed at stopping academics from questioning the government or associating with any political party or organisation that participates in politics.

On October 4, the commission had issued a notification saying the HRD ministry had asked it to set up a working group to study whether exams, teaching, learning and evaluation could be brought under ESMA.

Headed by former commission member V.S. Chauhan, the seven-member group is to hand in its report within 30 days of its first sitting. It could not be confirmed whether or when the group had held its first meeting.

A ministry official said that Delhi University teachers frequently struck work, and this was affecting classes and exams. Last summer, the university’s teachers had gone on strike demanding the regularisation of ad hoc teachers. This led to exam results being delayed.

HRD minister Prakash Javadekar said the nudge to central universities to adopt central service rules was only a suggestion.

“We do not want to restrict autonomy; we do not intend to impose any restriction,” Javadekar told a news conference. “Every university makes its rules. The UGC wants them to make their rules at the earliest.”

A senior commission official said the universities had their own rules but these might not be comprehensive. “We said that if any university wanted to adopt the Central Civil Service rules to address any inadequacy, they could do so. It is not binding.”

An email to the ministry seeking its comments on the proposal to bring academic activities under ESMA evoked no response till Thursday evening.

Misra demanded that the government withdraw the notification and dissolve the working group immediately.

“This government is worse than the British colonial government. Questioning is key to the creation of new knowledge. Dissent is an essential aspect of a university,” he said.

In 1902, the then Viceroy of India, Lord Curzon, had initiated a University Bill that mandated uniform rules at universities. Congress leader Madan Mohan Malviya had protested, saying uniformity would destroy the independence of universities.