Advertisement
Home / India / Assembly polls 2022: BJP heads for easy win in UP, AAP is king of Punjab
Congress stares at a wipe-out

Assembly polls 2022: BJP heads for easy win in UP, AAP is king of Punjab

The results, in line with exit polls, are a clear boost for Narendra Modi before the next general election in two years 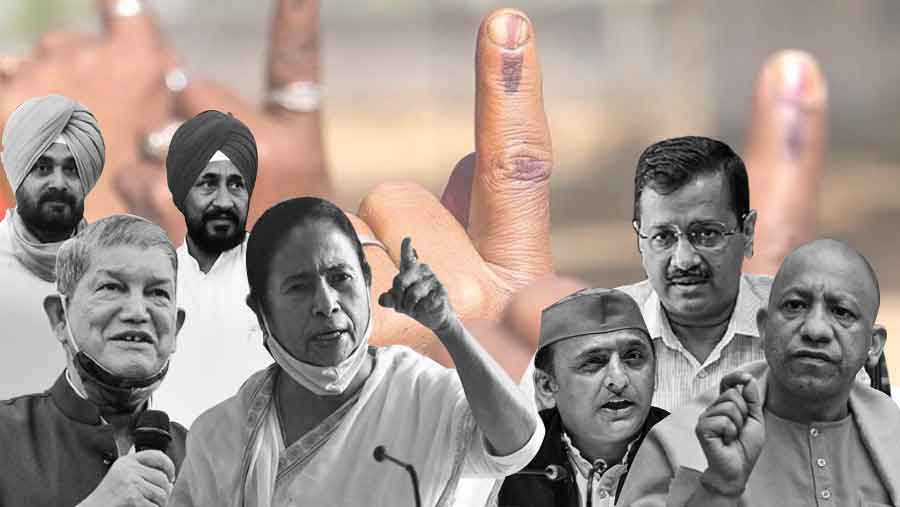 There’s rejoicing at the BJP headquarters as the election results show the party storming to a massive win in Uttar Pradesh and victories in three other states. AAP is poised to make history by becoming the next government in Punjab.

Goa is the only state where the Congress has put up a tough fight against the BJP. There are whispers that the Congress is trying to stitch together an alliance with other like-minded parties.

In Uttarakhand and in Manipur, the BJP is also on track for victory.

For the Congress, meanwhile, the returns are showing a wipeout for the party. The initial returns from the elections in the powerhouse state of Uttar Pradesh show that the BJP has opened up a huge lead over the Samajwadi Party and is set to return to power.

The BJP is leading/has won in 268 seats, the Samajwadi Party has taken second place with leads/wins in 123 seats. The BSP is ahead in 5 seats while the Congress is in the lead. Has own 4 seats. Independents hold leads in three seats.

In the big upset news of the elections, results from the polls in Punjab show AAP massively ahead with wins/leads in 90 seats, crossing the majority mark, and set to pull off a victory. Congress is in second place with 17 seats while the Shiromani Akali Dal is in third spot with 6. AAP workers have already started celebrating in Punjab, the party’s breakthrough which could be a big assist to party leader Arvind Kejriwal’s hopes of taking the movement national.

The election results are broadly in line with the exit polls. The BJP landslide in the bellwether state of Uttar Pradesh, which has more than 200 million people, is a clear boost for Modi before the next general election in two years. Opinion polls conducted before voting had mainly forecast a BJP return to power by the party led in the state by Yogi Adityananth who’s mentioned as a possible successor to Modi.

In Uttarakhand, the BJP has wins/leads in 44 seats while Congress is in second place with 22 leads/wins. The BSP is showing wins/leads in 2 seats, while others are leading/winning 2. AAP is yet to open its account in the state.

Uttar Pradesh: The one that holds the future

Elections to the 403-seat Legislative Assembly in Uttar Pradesh were held over seven phases from February 10 to March 7. Will Chief Minister Yogi Adityanath steer the Bharatiya Janata Party (BJP) to another victory, as most exit polls have predicted? In 2017, the BJP had won 312 of the 403 seats, unseating the Samajwadi Party and then chief minister Akhilesh Yadav. While Yadav launched a spirited fightback, tying up with smaller parties, and staying away from both the Congress and the Bahujan Samaj Party, it remains to be seen what impact his tactics have had on the ground.

Adityanath’s reign saw many challenges, not least the vicious second wave of COVID-19 which took many lives. Other election factors were rising unemployment, with even Union ministers facing the heat at rallies, the farmers protest in western UP, and a crackdown on dissent, where minorities felt the brunt. Reporters on the ground said the popular perception was that Adityanath had managed to tackle the twin challenges of “corruption and crime”, a legacy of Yadav’s governance.

The Congress, in a disarray in the state, was led by Priyanka Gandhi who launched a campaign focused on gender equality, even putting up the mother of the 2017 Unnao rape victim as a candidate.  With a slogan, ‘ladki hoon, lad sakti hoon (I’m a girl, I can fight)’, the Congress reserved 40 per cent of the seats for women. In a state where caste equations can tilt the applecart, the BJP, once seen as an upper caste party, has reached out to other backward classes launching a slew of welfare schemes and ministerial berths.

Yadav noticed this and tried to offer more schemes on the campaign trail. All parties wooed women, who turned out in large numbers to vote across the state. For Adityanath, that the stray cattle issue is a problem is an understatement, with even Prime Minister Modi acknowledging it in his speeches, and promising to tackle it if the party is re-elected. As for the BSP,  Mayawati and the BJP have been warm towards each other.

Will hardselling Hindutva work for  Adityanath? Will Yadav be able to convince voters he stands not just for Yadavs and Muslims? The BJP has not faced a blip in U.P. since 2014 with one-fifth of its sitting Lok Sabha members too elected from the state. All eyes are on U.P. because its outcome also becomes a litmus test for the 2024 Lok Sabha polls.

Punjabis love to wrestle and every election in the northern state throws open a war that is a mirror image of a wrestling bout - guess what -ruling Congress, BJP, AAP and SAD are in the running.

Internal feud within the Congress with veteran Amarinder Singh forced to quit as CM and cold equations between his successor Charanjit Singh Channi and state unit chief Navjot Singh Sidhu may not augur well for the Grand Old Party. Exit polls predict an AAP sweep in the 117-member Assembly. But you never know - perhaps the Captrain factor may prove costly for Congress.

With 40 seats at stake, exit polls predict a hung Assembly and already political parties have set the ball rolling to formulate strategies and play around permutations and combinations to grab power. Congress, BJP, AAP, MGP and TMC will fight it out and do not be surprised if the age-old adage, 'Politics throws strange bedfellows’ is vindicated.

BJP's rivals would pull no punches to oust the saffron party but BJP being a master of last-minute surprises could engineer a split to stay back in power.

The Himalayan state has witnessed a musical chair of CMs in recent times with the BJP changing chief ministers thrice - instability within the party coupled with factional feuds and complaints of misgovernance may take a toll on the  BJP. However, the Congress too is mired in internecine squabbles involving former CM Harish Rawat and his bete noires within the party. AAP too is trying to make inroads into the 70-member state Assembly. Most exit polls have given the BJP the majority but…

Race to the 60-member Assembly has major stakeholders like ruling BJP, JD (U) and Congress. Exit polls predict BJP bagging 25-30 seats, Congress may have to be content with 10-15 seats. BJP allies like Naga People's Front are likely to bag around 10-12 seats.

Chief Minister Nongthombam Biren Singh looks set to hold on to power unless a miracle happens. And as usual, given a hung Assembly, the saffron party could resort to last-minute machinations to call the shots like in the past.
And Congress turncoat Biren would second it.