The police were accused of complicity in the February violence, which killed 53 people of whom 40 were Muslim 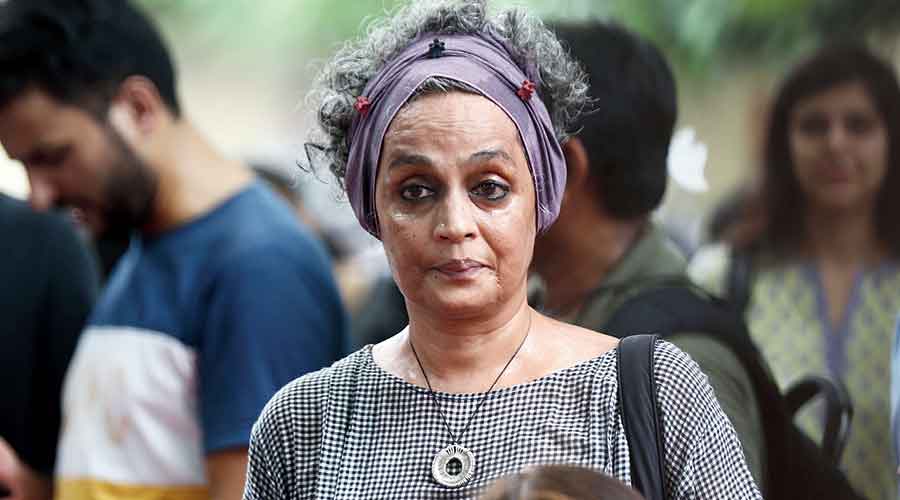 Author Arundhati Roy on Thursday flagged a similar “pattern” between the Republic Day clashes in Delhi and the communal riots last February, speaking at an online event to mark the 59th birth anniversary on Friday of murdered journalist Gauri Lankesh.

“The pattern is so similar — spinning it into a pogrom. Politicians calling for violence and you could see police supporting that,” she said when Ahmedabad-based activist Teesta Setalvad asked her about an article on the pandemic Roy had written for London’s Financial Times that mentioned the protests in the winter of 2019.

“During Republic Day, once again you see a person close to the ruling establishment using it to try and slide the ground under the feet of the spectacular and very peaceful protest. The farmers have shown a great deal of wisdom and political spine and I don’t think you can turn them over easily,” Roy said.

Punjabi actor and former BJP campaigner Deep Sidhu is accused of inciting the farmers from the tractor parade who stormed the Red Fort, clashed with police and hoisted a Sikh pennant.

The police were accused of complicity in the violence, which killed 53 people of whom 40 were Muslim.

On Thursday, supporters of the new farm regime held counter protests at the sites of the farmers’ agitation, calling for the eviction of those protesting against the new laws. The similarity was unmistakable with the mobilisation of Right-wing groups and individuals against the anti-CAA (Citizenship Amendment Act) last winter. One such mobilisation was led by BJP leader Kapil Mishra who made an incendiary speech just hours before the riots began.

Roy reminded the audience — in line with the work of Lankesh who was assassinated in Bangalore in 2017, allegedly by Hindu extremists — about the prophecy activists had made decades ago about an alliance between crony capitalism and religious ultra-nationalism.

“Both led to this country increasingly becoming a police state, passing laws that could not possibly be called democratic. There are laws but how they are applied depends on your caste, ethnicity, gender and religion. You see the institutions of democracy being hollowed out.”

Roy, a Booker Prize winner, quoted Oxfam studies that show that the cumulative wealth of India’s 63 richest people outstripped the 2018 budget outlay, and that the wealth of the country’s 100 richest grew exponentially during the pandemic that last April witnessed a loss of 170,000 jobs per minute.

“If you critique these, they turn around and say, what is the alternative? Because we are then supposed to look for the person with the bigger chest or more money or more power, another king,” Roy said.

“Whereas we actually need to look for people who understand this country, who have a heart, who love the people in this country. We have become a country of ordinances and ambushes and secret announcements. The citizenry is being treated as an enemy, including people who vote for it.”