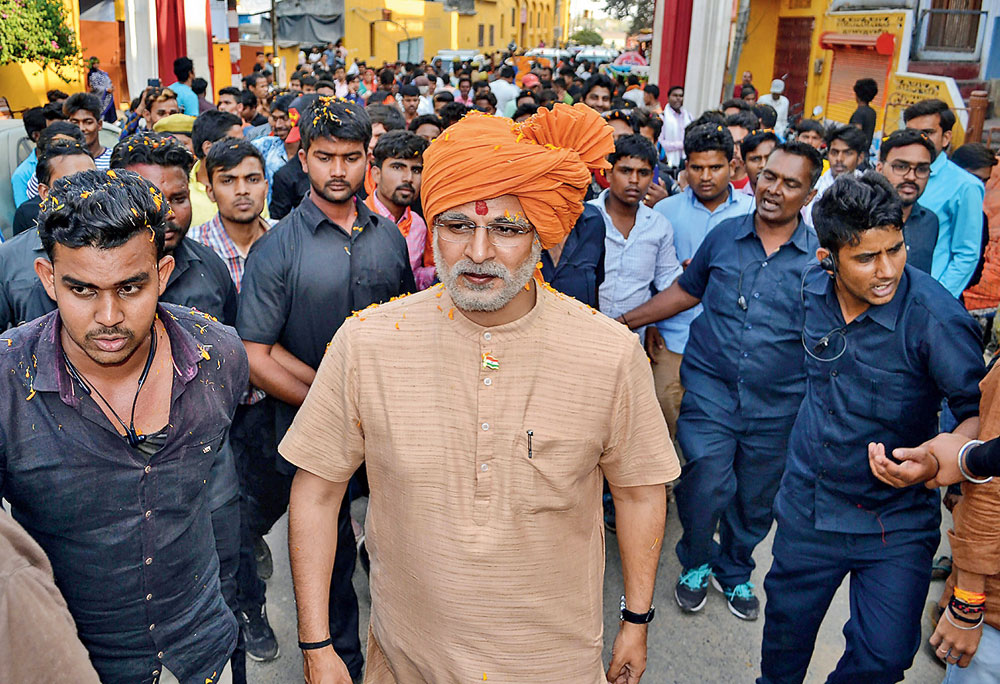 What the election code of conduct is really about

A group of retired civil servants on Tuesday urged the Election Commission to ensure that no biopic of any candidate for the Lok Sabha polls is allowed to be aired across platforms, including social media, till the elections are over.

The immediate provocation for the letter is the impending release of PM Narendra Modi, the biopic that is to hit the theatres on April 5. The former bureaucrats and diplomats said that not only should this film not be aired till the elections are over, but also any other such venture on any candidate.

There have been media reports claiming that the film was initially scheduled to release on April 12, but the date had been advanced by a week.

The group of retired civil servants, who as a collective go by the name Constitutional Conduct, said in the letter: “You will appreciate that such a film would create enormous electoral mileage for the Prime Minister and the party in power. It is, therefore, necessary to examine if the release of this biopic after the announcement of elections and the coming into force of the Model Code of Conduct (MCC) is consonant with the principles of a free and fair election.”

“The same principle would apply to any similar biopic on any other candidate in the forthcoming elections, since news reports mention a biopic on the president of the Indian National Congress, Shri Rahul Gandhi,” the letter added.

Appreciative of the Election Commission’s efforts to make social media platforms subscribe to the code of conduct during the elections, Constitutional Conduct said the same should be applied to the process of film certification and release.

They cited the model code of conduct, which says: “The party in power whether at the Centre or in the State or States concerned, shall ensure that no cause is given for any complaint that it has used its official position for the purposes of its election campaign.”

Constitutional Conduct has contended that since the Central Board of Film Certification falls within the jurisdiction of the information and broadcasting ministry, the government has a role in the process.

“When even appointments to the Boards of Public Sector Undertakings are not permitted under the MCC, open advocacy of the role of the Prime Minister (or of any other candidate) in biopics or documentaries focused on them amount, in our view, to propaganda in favour of individuals belonging to particular political parties at a time when the MCC is in force,” the letter said.

The trailer of PM Narendra Modi, starring Vivek Oberoi in the title role, was released on March 20.

Anticipating the possibility of a counter-view that the Election Commission does not have the power to stop the screening of a film, the retired civil servants flagged Article 324 of the Constitution.

“In a catena of judgments both before and after Association for Democratic Reforms v. Union of India (2001), the Supreme Court has ruled that Article 324 of the Constitution of India operates in areas ‘left unoccupied by legislation’ and the expressions ‘superintendence, direction and control’ as well as ‘conduct of all elections’ in Article 324 are the ‘broadest of terms’. Therefore, ‘the Commission can cope with a situation where the field is unoccupied by issuing necessary orders’,” the letter stated.

Article 324 (1) states: “The superintendence, direction and control of the preparation of the electoral rolls for, and the conduct of, all elections to Parliament and to the Legislature of every State… held under this Constitution shall be vested in a Commission (referred to in this Constitution as the Election Commission).”

The retired civil servants said the poll panel was fully competent to tackle a situation where biopics or documentaries on candidates are released during the election process by suitably amending the model code of conduct or issuing directions as deemed appropriate.

Since June 2017, Constitutional Conduct has been making similar interventions in the mainstream discourse on issues of national importance.