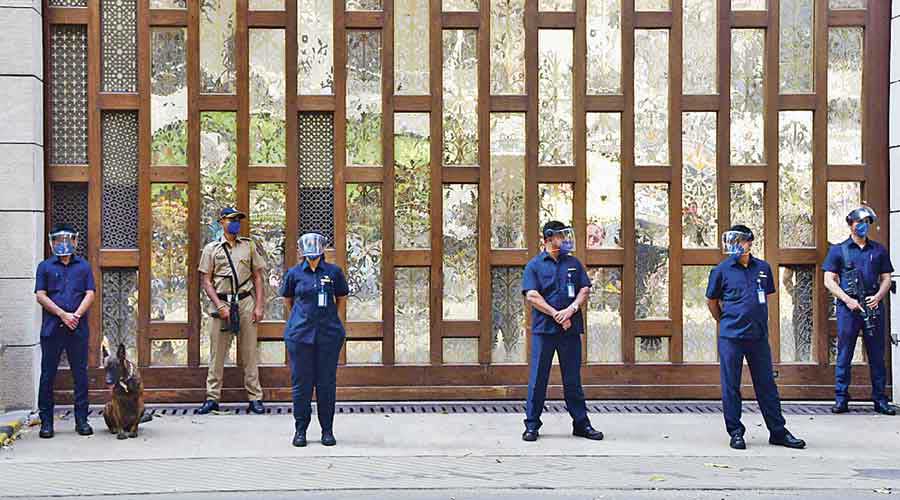 Police personnel guard Mukesh Ambani’s residence Antilia in Mumbai on February 26, a day after explosives were found in an abandoned car in its vicinity
PTI
PTI   |   Mumbai   |   Published 10.03.21, 01:26 AM

Vimla Hiren, wife of Mansukh Hiren who was found dead days after a vehicle that had been in his possession was seized from near industrialist Mukesh Ambani’s residence with explosives inside, has told the anti-terrorism squad that she suspects assistant police inspector Sachin Vaze’s role in the death.

Mansukh, who had a vehicle spare parts business, had said the Scorpio had been stolen a week before it was found near the Ambani residence on February 25. He was found dead in a creek on March 5.

Vimla in her statement on March 7 said the Scorpio, owned by Peter Newton, was in the possession of the Hiren family for the past three years with Newton’s consent.

Her husband knew Vaze who was a regular client, she said. In November 2020, he had given the Scorpio to Vaze to use, Vimla said, adding that the police officer returned it on February 5, 2021. Vimla said on March 3, Mansukh told her Vaze had asked him to get arrested in the case and assured help to get him out on bail within 2-3 days. She advised him against this and he seemed tense.

On March 4, her husband said he was going to consult the police who were their well-wishers. After 11pm his phone became unreachable. His brother Vinod called Vaze who advised him to wait till morning, she said. The next day Mansukh’s body was found in the creek.