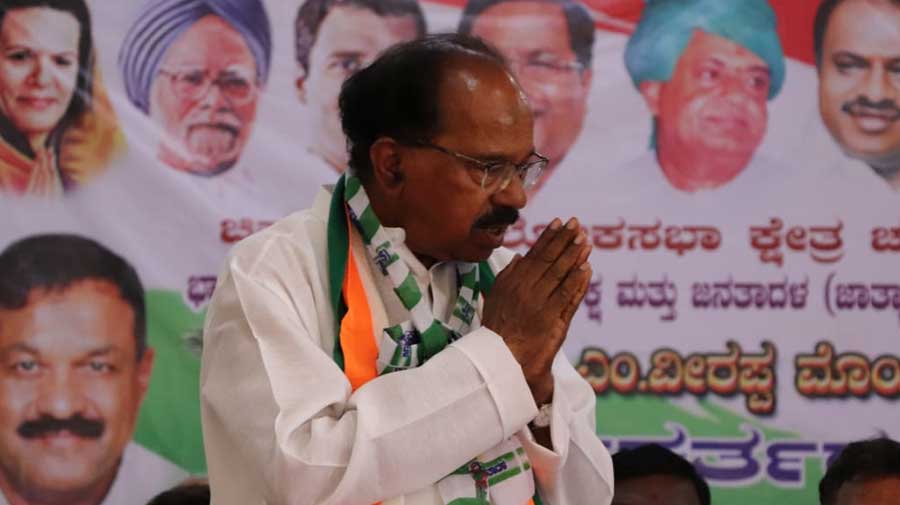 An anti-Narendra Modi agenda alone will not help sustain an opposition front to take on the BJP, senior Congress leader M Veerappa Moily cautioned on Thursday, calling for drawing up a common minimum programme for parties to work together.

The former Union Minister also warned that such a front will not take off if parties debate on which leader or political outfit should lead it at this stage itself.

"They (opposition parties) should not bother about leadership now," Moily told.

"If they start debating as to who should become its leader, which political party should lead, it will not take off," the former Karnataka Chief Minister said.

He welcomed West Bengal Chief Minister Mamata Banerjee's meeting with the Congress chief Sonia Gandhi in the national capital on Wednesday, and her comments on the need for opposition parties to work together.

On perception in some quarters that only an anti-Modi sentiment is bringing opposition outfits together, Moily said: "That alone should not be projected.

Anti-individualism will not take take any political front forward."

"That's what they (the then opposition parties) used to do -- anti-Indira Gandhi. That did not succeed," he said.

Moily said the opposition agenda should not be based on personal issues.

"It should be based upon ideological issues."

He spoke out against adopting a policy of "opposition-for-opposition-sake" and a "negative approach".

"Opposition parties should unite and come to a basic understanding.It should be principled opposition.They should draw up a common minimum programme as a result of unity.Otherwise, people will not trust us," Moily said.

Without a common minimum programme, an opposition front will not take off, according to him.

"The national debate should be on sustenance of democracy, secularism, and taking the country forward and also against the 'negative agenda' of the present government," Moily said.

He said no party in the opposition front should oppose entry of any outfit wanting to come onboard.