Advertisement
Home / India / CAA: Vanar Sena versus Ram and a multitude in Bangalore

CAA: Vanar Sena versus Ram and a multitude in Bangalore

The 1,500-odd policemen could do nothing other than detain a few hundreds, including Guha and Congress MLA Rizwan Arshad, although there was no violence anywhere in Bangalore 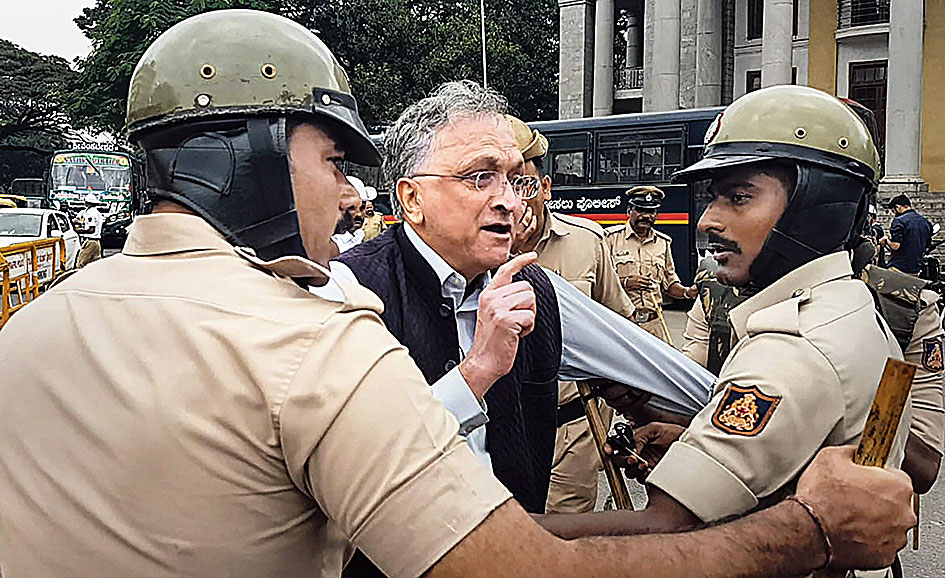 At first it was a trickle. Then they came in waves, from all sides, converging peacefully at the heart of India’s IT capital, catching off guard the police and the administration who had imposed prohibitory orders just to prevent such a protest.

Neither the BJP government of Karnataka nor the police had anticipated such an intense and spontaneous uprising against the Citizenship (Amendment) Act and the National Register of Citizens when they abruptly withdrew permission late on Wednesday night for protests across the state.

Around 9am, two hours before the protests were to begin, people started arriving in small groups at the Mysore Bank Circle and Town Hall area.

Around 10.30am, the police bundled the first batch of protesters into a waiting bus as the government had clamped prohibitory orders under CrPC Section 144 that disallows gatherings of five or more persons.

But the turning point came when historian Ramachandra Guha was detained while he was speaking to reporters at the protest venue. Five policemen surrounded and dragged him by the hand towards a bus, not allowing him to finish his statement.

Soon, the crowd of protesters began swelling. Thousands of people from all walks of life — men and women, college students, IT employees, lawyers, doctors — converged from all sides, catching the police unawares. People from more than 30 progressive groups and Opposition parties such as the Congress, CPM and the CPI joined in.

Sources said that at its peak, close to 8,000 people had gathered in the area. The 1,500-odd policemen could do nothing other than detain a few hundreds, including Guha and Congress MLA Rizwan Arshad, although there was no violence anywhere in Bangalore.

“Why is it that only BJP states have this (prohibitory orders)? Why does no other state have it? This is totally wrong. Look at how peaceful they are. These are ordinary citizens protesting,” Mahatma Gandhi’s biographer added. “I am sorry for the police. They are receiving orders from Delhi. They are paranoid. The rulers in Delhi are scared. Our home minister would not dare allow a peaceful protest.”

As the police appeared flummoxed, people defied the prohibitory orders in front of the Town Hall, making a statement that would be remembered for time to come.

At simultaneous protests in front of Mysore Bank Circle hardly a kilometre away, over 100 IT employees took part. Over 50 of them were detained by the police and released after around six hours.

However, what numbed the law enforcers was an impromptu march by thousands of men and women, young and old, towards Silver Jubilee Park Road opposite the Town Hall.

By the time the police could mobilise backup, at least 3,000 protesters shouting “azaadi” slogans had gathered at the park. A few swings of the baton by a handful of policemen who had rushed there scattered the crowd for a moment, but soon more and more people arrived.

So spontaneous was the protest that the cops could do nothing to contain the swelling mass. Shopkeepers in the area downed their shutters and joined in, as did passers-by who parked their scooters and motorbikes and began marching.

Placards and shoes placed by students of the Indian Institute of Management, Bangalore, on the road outside the campus gate after they were denied permission to come outside to protest against the Citizenship (Amendment) Act on Thursday.
(AP)

Waving the Tricolour and holding up placards demanding an unconditional withdrawal of the CAA and the NRC, they chanted without any let-up.

Students from the National Law School of India University, St Joseph’s Commerce College and several other institutions flooded the streets and courted detention. The elders repeatedly reminded the youngsters to remain non-violent as that was the basic objective of the agitation.

The protests halted traffic in the central business district with tailbacks of up to 5km in all directions.

Police officers manning the area had earlier in the day said they had cancelled all permissions to the protesting groups. On Wednesday night, city police commissioner Bhaskar Rao had said sit-ins could go ahead.

Chief minister B.S. Yediyurappa said he had ordered the police not to counter the protesters.

“No action should be taken against common people. If any policeman is found to have misused his powers, I will take action against him,” the BJP veteran said, perhaps gauging the public mood and not wanting any confrontation.

Several Muslim community leaders later met the city police commissioner and the chief minister to air their concerns over the CAA and the NRC.

Congress MP Rajeev Gowda filed a PIL in Karnataka High Court against the prohibitory orders that will be in place till midnight on Saturday.

“This is a government that is essentially fascist in nature and does not want people to exercise their rights. That is clear,” he told The Telegraph at the Town Hall. “If you are not allowed to even stand and express your opposition to a law, what kind of a country are we in? Is this a police state?”

He objected to the police sending away protesters who came in ones and twos to beat the Section 144 provision. “That is not what the law says. Section 144 says up to five persons can gather,” he clarified.

Congress leader P.C. Siddaramaiah slammed Yediyurappa for clamping prohibitory orders in much of the state.

“After a series of assaults on the values enshrined in the Constitution, it is time to take away the right to peaceful protest through Sec 144. I never expected @bsybjp to play to the tune of @narendramodi. I thought he was more progressive and inclusive. Shame on you Mr Yediyurappa,” the former chief minister tweeted.

But things were different in Mangalore where the police lathi-charged protesters who refused to budge from the State Bank of India area in the coastal city. They turned violent after the police used force to disperse them.

Many of the protesters returned wearing helmets and threw stones at the police, triggering a standoff that lasted for nearly three hours.

The protesters dared teargas shells fired by the police and put up roadblocks by burning tyres. No vehicles plied in central Mangalore.

Later, a curfew was declared in parts of Mangalore till Friday evening. Areas under five police stations that cover the central parts of the city have been placed under curfew.

Normal life came to a grinding halt in Gulbarga in north Karnataka as well, with thousands of protesters choked the heart of the city.

Unlike in Bangalore where one side of the road was kept open, in Gulbarga both sides were occupied by the protesters from the agriculture produce market to Jagat Circle and the police could do nothing.

The police had to release around 100 protesters detained at the spot after buses carrying them could not exit the choked stretch. However, like in Bangalore, Gulbarga saw peaceful protests with participants chanting “azaadi” and slogans against Prime Minister Narendra Modi and Union home minister Amit Shah.