'The Modi government has no compassion when it comes to shutting down people’s voices,' Sonia said 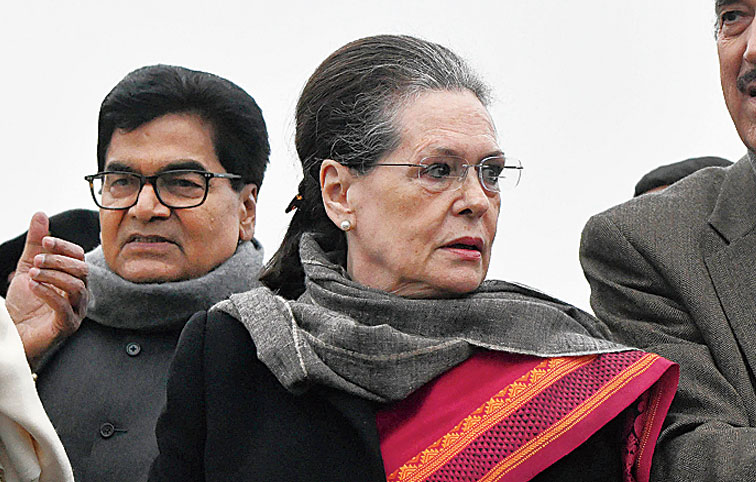 Sonia Gandhi on Tuesday led a delegation of Opposition leaders to President Ram Nath Kovind to express concern over the police crackdown at Jamia Millia Islamia university and demand withdrawal of the “unconstitutional” Citizenship (Amendment) Act, stressing that the country was being hurled into divisive violence.

“The Modi government has no compassion when it comes to shutting down people’s voices.... We have an example in Delhi where the police entered the Jamia women’s hostel and dragged them out and beat the students mercilessly,” Sonia, the Congress chief, told reporters after the delegation met the President and submitted a memorandum.

“The situation in the Northeast, which is now spreading throughout the country including the capital because of the act, is a very serious situation…. We fear that it may spread even further. We are anguished at the manner in which the police dealt with a peaceful demonstration,” Sonia added.

The memorandum submitted to the President, who has already given his ascent to the law passed by Parliament, said the CAA was notified in “undue haste”.

“In the Lok Sabha, the Govt exercised its brute majority to pass the bill and soon after, in the Rajya Sabha, despite strong opposition, it was carried,” the memorandum said.

“The Citizenship Amendment Act of 2019 is divisive. Its passage does not augur well for the future of democracy in India. The fact that the government has not paid heed to the advice of experts consulted between 2016 and 2019 is proof of the intent of the government to further a divisive agenda which will tear apart the inclusive character of our republic,” the memorandum added.

The Opposition leaders said they urged the President, as the head of the government and custodian of the Constitution, to seek the withdrawal of the citizenship law in view of the widespread protests. “The widespread protests across the country against this enactment is proof of the fear that has spread in the minds of common people,” the memorandum said.

Many other Opposition parties like the Left constituents, Trinamul, Samajwadi Party, National Conference, AIUDF and the RJD were part of the delegation. “We have requested the President to advise the government to withdraw the CAA immediately,” Trinamul’s Derek O’Brien said.

On the police crackdown at Jamia Millia Islamia university, the delegation urged the President to ask the government to establish a commission of inquiry.

“We hope that you will, through your good office, intervene in this matter and ask the government to establish a commission of enquiry to ensure that all those guilty of perpetuating violence in whatever form be brought to book,” the memorandum said.

The leaders told the President that the police entered the university without authorisation and “brutally attacked innocent students who were not even part of any protests”.

“The brutality (of the police) that followed, evidenced by the images on social media, is further proof of the insensitive manner in which the police has handled the situation,” the memorandum said.