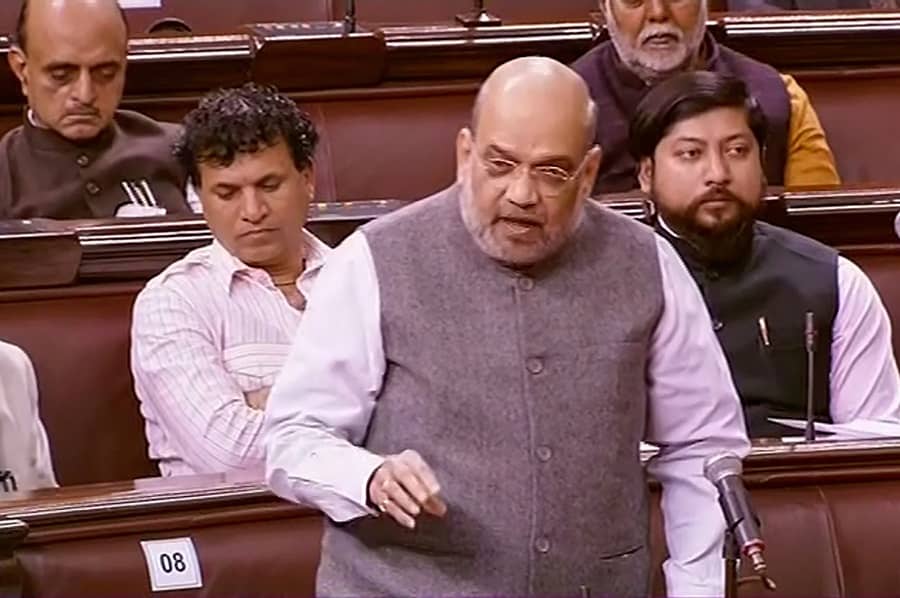 Home Minister Amit Shah on Monday requested Asaduddin Owaisi, president of the All India Majlis-e-Ittehadul Muslimeen, to accept Z category security offered by the government after a recent attack on his car.

Making a statement in Rajya Sabha, Shah said that a government assessment has found that Owaisi still faces security threat, but the Hyderabad MP has refused to take the CRPF protection.

"As per the verbal information sent by Owaisi to us, he has refused to take security. I request Shri Owaisi through this House to take the security immediately and address our concern (about his safety)," Shah said in the Upper House. He also told the House that the Ministry of Home Affairs has received a report from the state government.

"The central government has issued directions to provide security to Owaisi many times earlier also. Telangana Police and Delhi Police remained unsuccessful in providing security to Owaisi due to his unwillingness for that," the minister said.

About the security threat to Owaisi, he stated, "We have reassessed the security of Owaisi. We have provided (offered) him in Delhi with a bullet-proof car under all India level Z category security of Central Reserve Police Force on the basis of assessment."

Shots were fired at Owaisi's car on February 3, 2022 in Uttar Pradesh following which two persons were arrested and arms were also recovered. Owaisi had reached Delhi safely after the incident. Shah also informed the House that the AIMIM leader did not have a scheduled programme in Hapur and no prior information was sent regarding his visit to the district control room.

"Local police inspected the site of the incident and arrested two accused and also recovered two pistols and an Alto car "A forensic team is conducting an investigation at the site of the incident and the (recovered) vehicles. Evidence is being collected. "Uttar Pradesh Police are also interrogating the two accused. The law and order situation is normal in the district. They are on high alert," Shah also stated.

"I don't want Z category security. I want to be an A category citizen, at par with you all. Why was UAPA not invoked against those who fired at me?" Owaisi had earlier said, referring to the tough anti-terror law that has been extensively used in recent times by BJP-led state governments and the centre, and according to critics, disproportionately against Muslims.

"I want to live, to speak. My life will be safe when the poor are safe. I will not get scared of those who shot at my car," he said in parliament. The government had decided to provide him with Z category security by the Central Reserve Police Force (CRPF) after reviewing the threat level in the light of the attack, just a week ahead of elections in Uttar Pradesh.

Two people have been arrested for firing at his convoy at Meerut's Kithoudh area, police said, and have been sent to 14 days' custody. One of the accused is Sachin, a resident of Noida who has an earlier attempt to murder case against him.

In his Facebook profile, Sachin says he is a member of a Hindu right-wing organisation and calls himself "Deshbhakt Sachin Hindu".

But questions are being raised over his political affiliation after pictures emerged of his posters expressing support to BJP and multiple photographs from his Facebook profile showing him posing with political leaders from UP Deputy Chief Minister Dinesh Sharma to Former Andhra Pradesh Chief Minister Chief N Chandrababu Naidu.

The other accused is Shubham, a farmer from Saharanpur who does not have a criminal record. According to police, the two have told them during questioning that they were upset with remarks made by Mr Owaisi and his brother and MLA Akbaruddin Owaisi.

Police have recovered country made pistols from them which they had recently purchased. Police are now looking for the people they bought the firearms from.

Owaisi to get 'Z' security