Gandhi family has a habit of going on holidays, so they want a tourism spot for vacation: Home minister 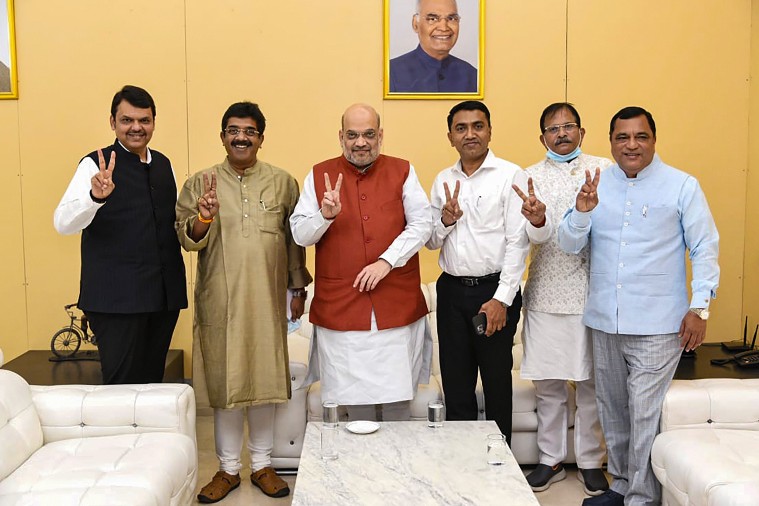 Hitting the campaign trail in Goa weeks ahead of the Assembly polls, Union Home Minister and senior BJP leader Amit Shah on Sunday said people of the state need to choose between the BJP's "golden Goa" and the Congress's "Gandhi parivar ka Goa", and asserted that only the BJP can provide political stability to the coastal state for its development.

He slammed the parties that have come from outside Goa and contesting the February 14 state elections, including the Trinamul Congress (TMC) and Aam Aadmi Party (AAP), saying that these political outfits do not understand the difficulties of Goans and have no solution to their problems, whereas the Modi government has given priority to development of small states like Goa.

Shah also criticised the Congress and the party's former Goa chief minister Digambar Kamat for "devastating" the state through his government's "misrule", and asserted that in the last 10 years, the BJP has provided a stable government and brought development in the state.

The Union minister was addressing an indoor public meeting at Ponda in South Goa, about 30 kms from state capital Panaji, to canvass for party candidate and former Goa chief minister Ravi Naik, who had recently joined the BJP after quitting the Congress. Naik is contesting the election from Ponda constituency.

"Congress's Gandhi family has a habit of going on holidays, so they want a tourism spot for vacation. They come here often. For BJP, Goa means 'golden Goa', but for Congress it is 'Gandhi parivar ka Goa'. Do you want (BJP's) golden Goa or Gandhi parivar ka Goa?" he asked.

Referring to the parties from outside Goa, he said, "Parties which have arrived here from other states will not be able to carry out development here. Do they know your difficulties? Do they have a solution for them?"

These parties have entered the fray just to expand their base or get national recognition, he alleged.

Taking a dig at the parties that have announced freebies ahead of the polls, Shah said, "These parties promise anything and everything as they know that they won't get elected and hence they won't have to fulfil them."

"These parties cannot form a government here. It is only the BJP that can do so. Unless there is political stability, there can be no development," he asserted.

In the last decade, the BJP government in Goa has worked for development of infrastructure and it cannot happen without the central government's help, he said, adding that during Kamat's tenure, Goa was notorious for corruption, instability and chaos.

"Kamat-led government had devastated Goa through its instability and misrule. But the BJP's stable government in the last 10 years has provided development to the state," he said.

Shah praised Chief Minister Pramod Sawant and said he has successfully handled the affairs of the state after the death of Manohar Parrikar.

"BJP under the leadership of Prime Minister Narendra Modi and CM Pramod Sawant in Goa can give development to the state, create employment opportunities and also encourage the tourism industry," Shah said.

Claiming that Congress leader Rahul Gandhi was afraid of PM Modi's rising popularity, Shah said he suffers from "Modi-phobia". According to Shah, the Modi government has given priority to development of small states as a matter of its policy.

"Because the Centre understands that when a state is small, its requirement of development is more. Small-sized states have their own limitations of generating revenue, which cannot be overcome despite bringing any kind of transparency. You may bring transparency, but from where will the revenue come? Can you build infrastructure projects if the Centre does not provide you the support?" Shah said.

He said that if the Congress manages to come back to power in Goa, then infrastructure development of the state will come to a halt.

"Digambar Kamat had miserably failed to carry out infrastructure development in the state during his tenure (2007-2012), despite having his own party's government at the Centre. Will Kamat be able to send development proposals (to the Centre)? Even if he tries to do so, will Rahul Gandhi allow him to send? Gandhi will never allow it as he knows that due to it, PM Modi's popularity will increase," Shah alleged.

The BJP leader said that only Pramod Sawant, as Goa CM, will keep sending development proposals to the Centre and bring more infrastructure projects to the state.

In 2013-14, during the UPA rule at the Centre, Goa had received Rs 432 crore central funding, which was increased to Rs 2,568 crore in the last budget presented by the Modi government, he added.

Listing out various infrastructural projects undertaken during the BJP government, Shah dared former CM Kamat to present the development works carried out during his tenure.