Rajasthan CM hits back saying party has never been against industries 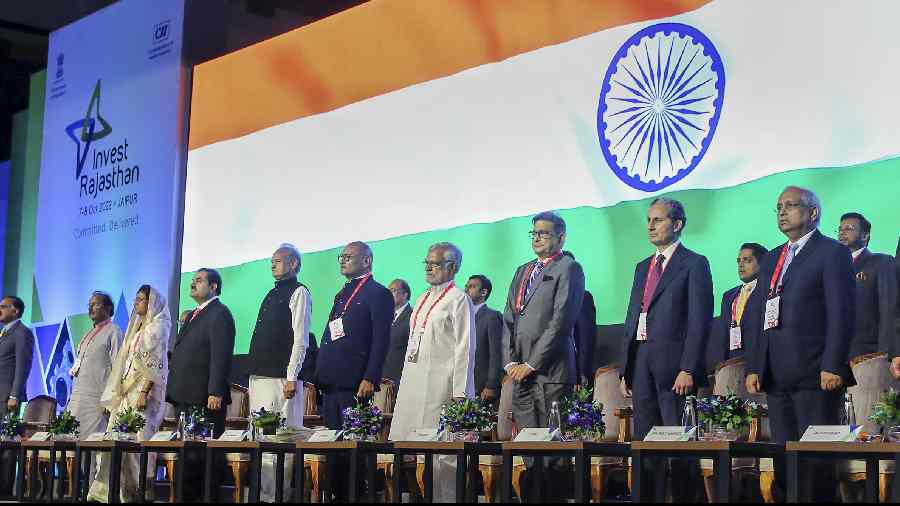 Gehlot, however, hit back saying the Congress has never been against industries.

Adani, chairman of the Adani Group and currently the richest Asian, was seated next to Gehlot at 'Invest Rajasthan', an event organised by the Congress-run state to attract investment.

Adani announced a whopping Rs 65,000 crore investment in the state over the next five to seven years - setting up a 10,000 MW solar power facility, expanding cement plant, and upgrading the Jaipur International Airport.

During his address, Gehlot addressed the business tycoon as "Gautam bhai" and congratulated him for becoming the world's second richest person.

Even as Gehlot showered praise on Adani, senior Congress leader Rahul Gandhi, without naming the business magnet, put up a tweet saying the Centre was waving loans amounting to several crore rupees of "capitalist friends" while the others were living a life of debt.

"Yesterday, I met a woman. Her farmer husband died of suicide as he had a debt of Rs 50,000. One Bharat: Loan to capitalist friends at 6% interest and loan waiver of crores. Second India: A life full of debt and hardships at 24% interest to Annadata. 'Two Indias' in one country, we will not accept it," he tweeted, recalling an incident from his Bharat Jodo Yatra.

He said while Rahul Gandhi accuses the Centre of favouring Adani and Ambani, the chief minister of Rajasthan favours the two business tycoons.

"Kal tak jo tha virodi, aaj bana manmeet, dhan ki jagi ummeed to badli apni reet," (the one who was being opposed until yesterday has come close today, with hopes of cash inflow, they changed their view).

BJP MLA and former minister Vasudev Devnani shared a picture of Gehlot seated with Adani at the summit, saying it was a "tight slap" on the face of the Congress high command.

In another tweet, Devnani shared a video in which Gehlot is seen congratulating Adani for his stellar success.

He tweeted in Hindi, "The chief minister, who constantly attacks the central government by taking Adani's name, is not tired of praising him in front of crores of Rajasthan citizens during the last days of his unstable government."

"The 'rare photo' of chief minister@ashokgehlot51 ji with Adani, whom Congress prince @RahulGandhi keeps cursing, at #InvestRajasthaSummit today is a tight slap on the face of the Congress high command, he said.

Responding to the criticism, Gehlot asked whether businessmen who joined a political party did not invest in states ruled by other parties.

"Many businessmen join a party, so do not they invest in other states? Those who are raising questions should say this," Gehlot said in a statement.

He said more than 3,000 investors having different ideologies participated in 'Invest Rajasthan' and were overwhelmed with the respect they received.

The chief minister said the state government received investment proposals worth around Rs 11 lakh crore and this showed that Rajasthan's traditional image had changed to that of an investment-friendly destination.

Big investments are coming to the state but I am very sorry that the BJP and a section of the media are engaged in negative publicity of this event. I have said in the press conference about Invest Rajasthan that the Congress party has never been against industries," he said.

Gehlot said the party is opposed to policies tailored to benefit a particular person by grabbing others' rights.

"I do not understand why the BJP opposed this programme. You oppose Ashok Gehlot, oppose the Congress, but why are you opposing the opportunities coming in the way of our youth? Is the Rajasthan BJP so opposed to us that it criticises the work being done for the bright future of the state?" he said.

Recently, Gehlot had apologised to Congress president Sonia Gandhi after several MLAs loyal to him boycotted the legislature party meeting in an apparent bid to pressure the party high command to retain him as the chief minister.

During the summit, Adani admired Gehlot for his social security schemes and his vision. The businessman also recalled how the Gehlot-led government, during its earlier tenure, supported the group in setting up a power project.

After the inaugural session, Adani told reporters in the presence of Gehlot that he had also committed to contribute towards the construction of two medical colleges in districts where there was no medical college, and a cricket stadium in Udaipur.