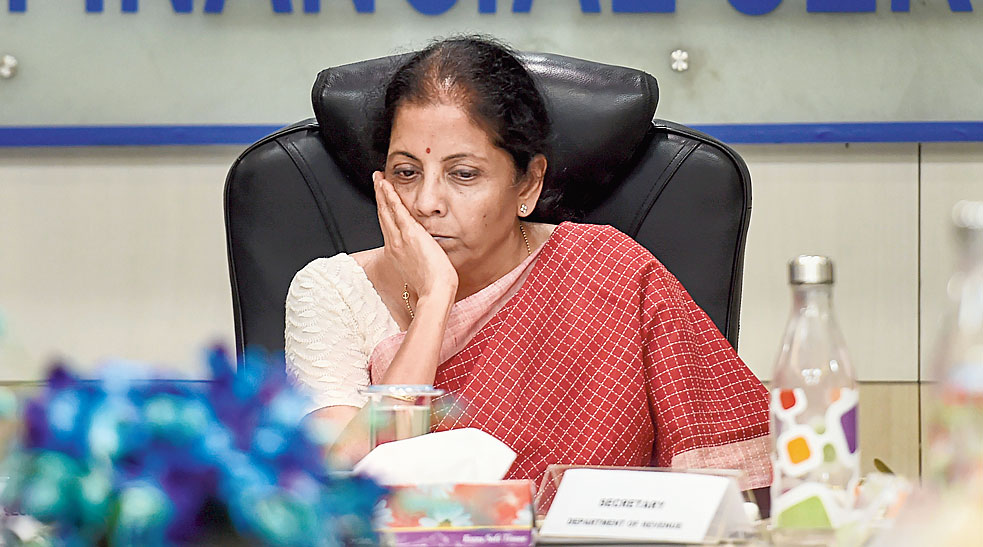 Nirmala Sitharaman had left it to the banks to work out the logistics of the exercise and asked junior finance minister Anurag Thakur to oversee the programme.
(PTI)
Our Special Correspondent   |   New Delhi   |   Published 26.09.19, 10:37 PM

Union finance minister Nirmala Sitharaman’s grand plan to get public sector banks to dole out loans and kick-start an economic arrival appears to have been star-crossed. Literally.

On Thursday, Sitharaman was forced to grudgingly admit that the huge credit carnival, supposed to start from September 25 in 200 districts, had struggled to get off the ground.

The plan — unveiled with great fanfare on September 19 — appears to have been blind-sided by Pitrupaksha, the 16-lunar-day period of mourning in many parts of the country when people pay homage to their ancestors.

“Consumption is happening; and once this 15-day period — the Pitrupaksha (from September 13 to 28) — is over, the festive season starts. In many states, people do not consider it a good time to make purchases,” Sitharaman told reporters after daylong confabulations with representatives of private sector banks, non-banking finance companies and housing finance companies.

“I feel demand will get back and motivate our economy to move at a faster rate. Things will look up in the next half-year and pep up every other sector. However, one or two sectors may still feel some stress,” the finance minister said.

Sitharaman had obviously failed to consult the almanac when she announced on September 19 that public sector banks would start shovelling credit to their increasingly tight-fisted, purchase-averse customers.

It is odd that a government that is so closely wedded to the propagation of the Hindutva agenda didn’t anticipate the risks of kick-starting a credit carnival during the “inauspicious period”.

The Modi government may have misjudged the intensity of demand for home, retail and small business loans when it announced the massive loan mela programme straight out of the blue.

Pitrupaksha appears to be the reason the borrowers have failed to roll up to the banks to avail themselves of credit that the banks are supposedly eager to dole out.

Sitharaman had left it to the banks to work out the logistics of the exercise and asked junior finance minister Anurag Thakur to oversee the programme.

In the past week, banks have been increasingly cagey and have stonewalled questions about the loan mela, refusing to name the districts where the loans would be given first or explain how the banks had divided the responsibility up among themselves.

Sitharaman is now betting that the loan-induced buying binge will begin after September 29 when the celestial skies start to clear, marking the start of the festive season.

This is not the first time Sitharaman has spun a bizarre narrative to explain the economic downslide. Earlier, she had blamed the slowdown in the auto sector on the millennials’ growing preference for car-hiring services over the purchase of automobiles.

The minister again asserted that the economic slowdown had bottomed out and the coming festive season would mark the start of the economic resurgence.

GDP growth in the first quarter of the current financial year had plunged to an over six-year low of 5 per cent.

But the government continues to insist that the fundamentals of the economy remain strong and that cyclical -— not structural — factors are responsible for the unforeseen slowdown.

Sitharaman said the government’s vaunted affordable housing scheme had taken off well, which was why bankers had urged the government at Thursday’s meeting to raise the limit under the scheme to Rs 50 lakh from the current Rs 45 lakh.

“Many of the micro-finance institutions, which operate deep in the country, have said that there is demand in those areas and they are extending loans. All of them clearly voiced a positive growth, which is a good, encouraging story,” she said.

Financial services secretary Rajiv Kumar said public sector banks would hold an outreach programme in 400 districts across the country during the festival season to crank up credit disbursal. In the first phase between October 3 and 7, some 250 districts will be covered, he added.

Private sector banks have also been invited to join the outreach programme.

Noted private banker Uday Kotak, who attended the meeting, said private investment would respond to the reduction in corporate tax. He said most banks would embrace the external benchmark-based lending formula from October 1.

“We feel that this is a huge opportunity to use this outreach programme to make use of the surplus liquidity that we have…. Nothing is stopping us from linking deposit rates to an external benchmark. I think private investment, both domestic and abroad, should pick up with the reduction in cost of capital, and banks will look to underwrite the appropriate projects,” Kotak said.

Last week, Sitharaman had slashed the base corporate tax rate for domestic manufacturing companies from 30 per cent to 22 per cent.

The tax on new manufacturing firms has been pruned from 25 per cent to 15 per cent in an effort to rekindle an investment boom.