Modi and Yogi converted a religious programme into a celebration of the government: Zafaryab Jilani 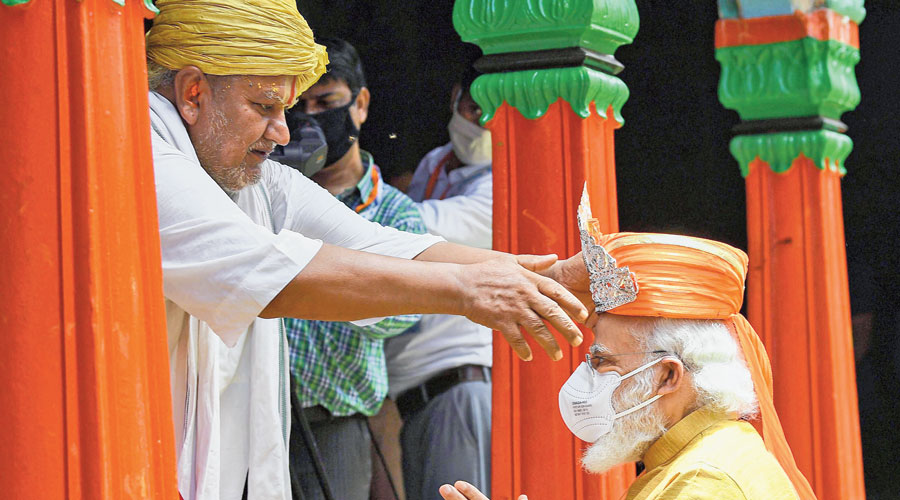 Prime Minister Narendra Modi being felicitated by a priest during his visit to Hanuman Garhi in Ayodhya on Wednesday.
PTI
Piyush Srivastava   |   Lucknow   |   Published 07.08.20, 04:13 AM

An All India Muslim Personal Law Board member on Thursday said Prime Minister Narendra Modi had violated the constitutional convention “by attending a function exclusively of the Hindu religion in a country where the members of other religions also have similar rights”.

“The Prime Minister and the chief ministers are not for just one religion in a secular country like India. It would have been fine had Modi and Yogi Adityanath made it a private function instead of marking their presence as Prime Minister of India and chief minister of Uttar Pradesh,” Zafaryab Jilani, who was counsel for the Sunni Central Waqf Board in the Ram Janmabhoomi-Babri Masjid case, said.

Modi had performed bhoomi pujan and laid the foundation stone for the Ram temple in Ayodhya on Wednesday. Adityanath was with him.

“If you look at it closely, you will find that it was a private function in which the Prime Minister and the chief minister were present officially. They used official flights and vehicles, deployed government officers to organise it, and wasted crores of the taxpayers’ money. They converted a religious programme into a celebration of the government,” Jilani said.

“The Prime Minister said in his speech that the temple was going to be built at the same spot after many centuries of a continuous movement. He said (a previous Ram) temple was broken down. The Supreme Court had said in its order in November 2019 that there was no evidence of the construction of a temple there after the 12th century. This was based on the report of the Archaeological Survey of India. In that situation, where is the question of pulling down a temple to build a masjid?”

The Hindu side had claimed in the Supreme Court that a Ram temple was razed in 1528 at the behest of Mughal emperor Babar and the Babri Masjid built at the spot.

“We have accepted the order of the Supreme Court but the winner in the case is contradicting what the highest court of the country has already authenticated. Further, the Hindu side couldn’t confirm when Lord Ram was born there. Their statements were on record in the court that Lord Ram was born there 9 lakh to 1.5 crore years ago,” Jilani said.

Iqbal Ansari, a Muslim plaintiff in the Ayodhya case, however, declined comment on the matter.

“I don’t want to comment on this issue simply because I don’t want any further bitterness between the two communities. The court handed 2.77 acres of land to the Hindus and thus ended the dispute,” he said.

“The Prime Minister laid the foundation stone — it was the choice of the government. It would be better if we look ahead and maintain peace and harmony in the country.”

Champat Rai, general secretary of the Shree Ram Janmabhoomi Teerth Kshetra Trust that will oversee the temple’s construction, had two days ago played down comments by some Muslim leaders against Modi’s plan to attend the ceremony.

“Some people may have their opinion but there is no point getting involved in that,” Rai had said.