Advertisement
Home / India / All bandits have to return loot: Mehbooba

All bandits have to return loot: Mehbooba 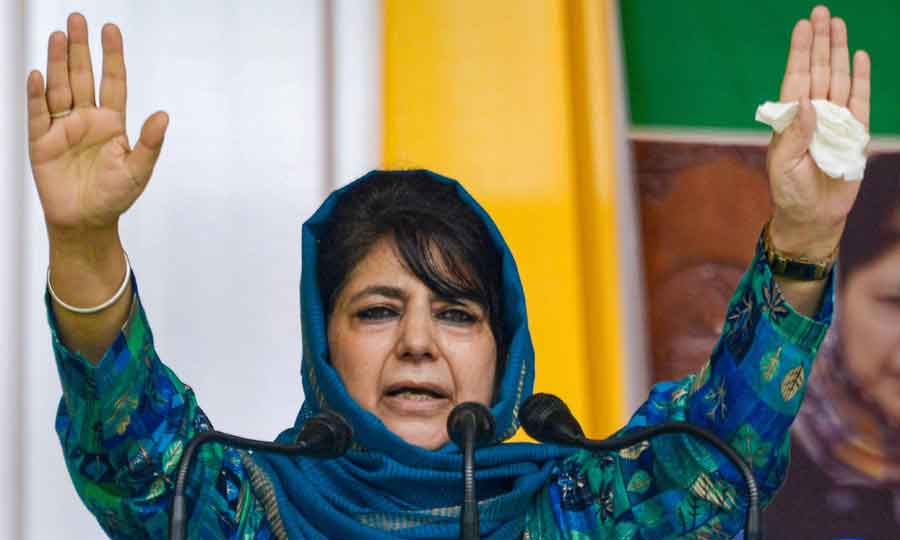 Former Jammu and Kashmir chief minister Mehbooba Mufti on Friday came out all guns blazing in her first public address after 14 months of imprisonment, referring to “bandits”, describing the revocation of the special status as robbery, declaring that Kashmiris were not comfortable in today’s India and vowing not to unfurl the Tricolour until the state flag was restored.

The People’s Democratic Party leader also pledged to tap into all peaceful means available to fight for the resolution of the Kashmir issue and force Delhi to reverse its decision to scrap Jammu and Kashmir’s special status and bifurcate the state into Union Territories, even to the peril of her life.

“My flag is this (pointing to the flag of the erstwhile state of Jammu and Kashmir kept on the table in front of her),” Mehbooba told reporters at a media conference. There was no Tricolour on the table.

Jammu and Kashmir lost its flag and constitution with the abolition of certain key provisions of Articles 370 and 35A on August 5 last year.

She repeatedly referred to bandits while speaking of the Centre’s move to scrap Jammu and Kashmir’s special status, which gave the erstwhile state’s residents exclusive rights over land and government jobs.

“No matter how big a thief or a bandit is, or how dreaded he is, how heavily armed he is, but if he steals something, he has to return the goods. The robbery on August 5 was not according to law,” she said.

“If there had been discussion and it had happened in keeping with the law, we would have thought it (special privileges) had gone and it won’t be returned. But it was stolen through loot, violating the Constitution.… They don’t have any power, the Indian Constitution gave that (power to decide on the special status) to our Constituent Assembly, which had decided it would continue,” Mehbooba said.

Mehbooba, who looked frail, said her struggle was not restricted to the restoration of Article 370.

Mehbooba, who stressed she would fight using peaceful means, appeared to suggest that Kashmiris were not happy in India anymore.

“They (Centre) don’t want the people of Jammu and Kashmir. They (people) are expendables for them. They want the territory. The territory was with them through legal means till August 5, 2019, but when they broke the relations on the basis of which we had acceded with them... let me tell them we are not comfortable in today’s India, what they have made of it,” she said.

The former chief minister said Jammu and Kashmir had acceded with a liberal, democratic and secular India, but Dalits and minorities were not safe in the country today.

To a question whether the Chinese aggression and the repeal of Jammu and Kashmir’s special status were linked, Mehbooba said even China had said so. “China has gobbled up 1,000sqkm. And that is a reality,” she said.