Around 15,000 people participated in a cultural protest organised by singer-actor Zubeen Garg 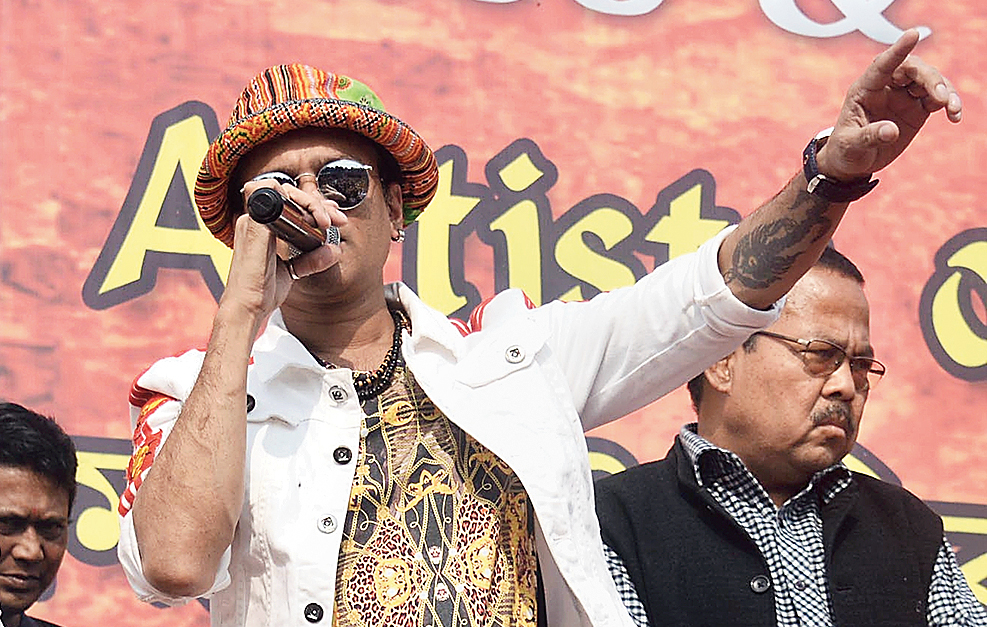 All Assam Students’ Union leaders on Sunday hinted at the possibility of floating an alternative to the ruling AGP, BJP and the Opposition Congress in Assam in consultation with artistes, intellectuals and the people of the state.

Nath said, “This protest will be long but we have to keep it peaceful. The government is using force, using people against the people. They will be overthrown. We will overthrow them.”

He went on to add, “ People are saying we are holding protests, hitting the streets but what alternative do we have? The AGP has cheated and betrayed us; the Congress is bad for us!”

“What will we do?” he asked the crowd.

Here Zubeen quipped, “We will form our own party.”

Nath resumed, “We are in talks with artistes and people for an alternative. We will remain apolitical but if necessary, we will go for political means by taking the permission of the people.”

Nath also reminded the gathering of the three-day Satyagraha across the state from Monday against the act, starting from Latasil ground here. “No amount of beatings or shootings can stop us. The rulers are not affected but we will intensify our peaceful stir,” he said.

Overthrowing the government was also on the agenda of AASU general secretary Lurinjyoti Gogoi.

“We have to overthrow the ruling dispensation. If speaking about our love for the mother is a crime, we are ready to commit such crimes again and again. We are at a critical stage. Since yesterday, chief minister Sarbananda Sonowal has started saying Joi Aai Axom rather than his usual Bharat Mata ki Jai. He has no moral right to say so,” he said.

AASU has been the breeding ground for political leaders in the state and even Sonowal and finance minister Himanta Biswa Sarma were members of the student organisation before joining politics.

Others emerging from the Assam Agitation include AGP ministers Atul Bora and Keshab Mahanta, former chief minister Prafulla Mahanta, all of whom were student leaders and formed the government after signing the Assam Accord.

The ongoing agitation against the act is being billed by the AASU as a rerun of the Assam Movement to check influx from Bangladesh from 1979 to 1985.

The protesters view the “unconstitutional, anti-Assam” act as a tool to welcome Bangladeshi Hindus, among others, which, in the long run, will swamp the indigenous population of the state in particular and the Northeast in general.

The AASU has already filed a case against the act in the Supreme Court as the new legislation allegedly violates the 1985 Assam Accord, which had a cut-off date of March 24, 1971, to detect and deport illegal immigrants.

The act, on the other hand, has a cut-off date of December 31, 2014, for according citizenship to non-Muslims from Bangladesh, Pakistan and Afghanistan.

“It is a ploy to reduce us to a minority. We will not rest till the law is repealed from Assam, the region,” Lurinjyoti said.

The ruling BJP , however, has been asserting that vested interests were at work against the legislation and that it will be beneficial to the state as it will help resolve the influx problem.

However, they have not been able to convince the masses as the ongoing protests suggest.