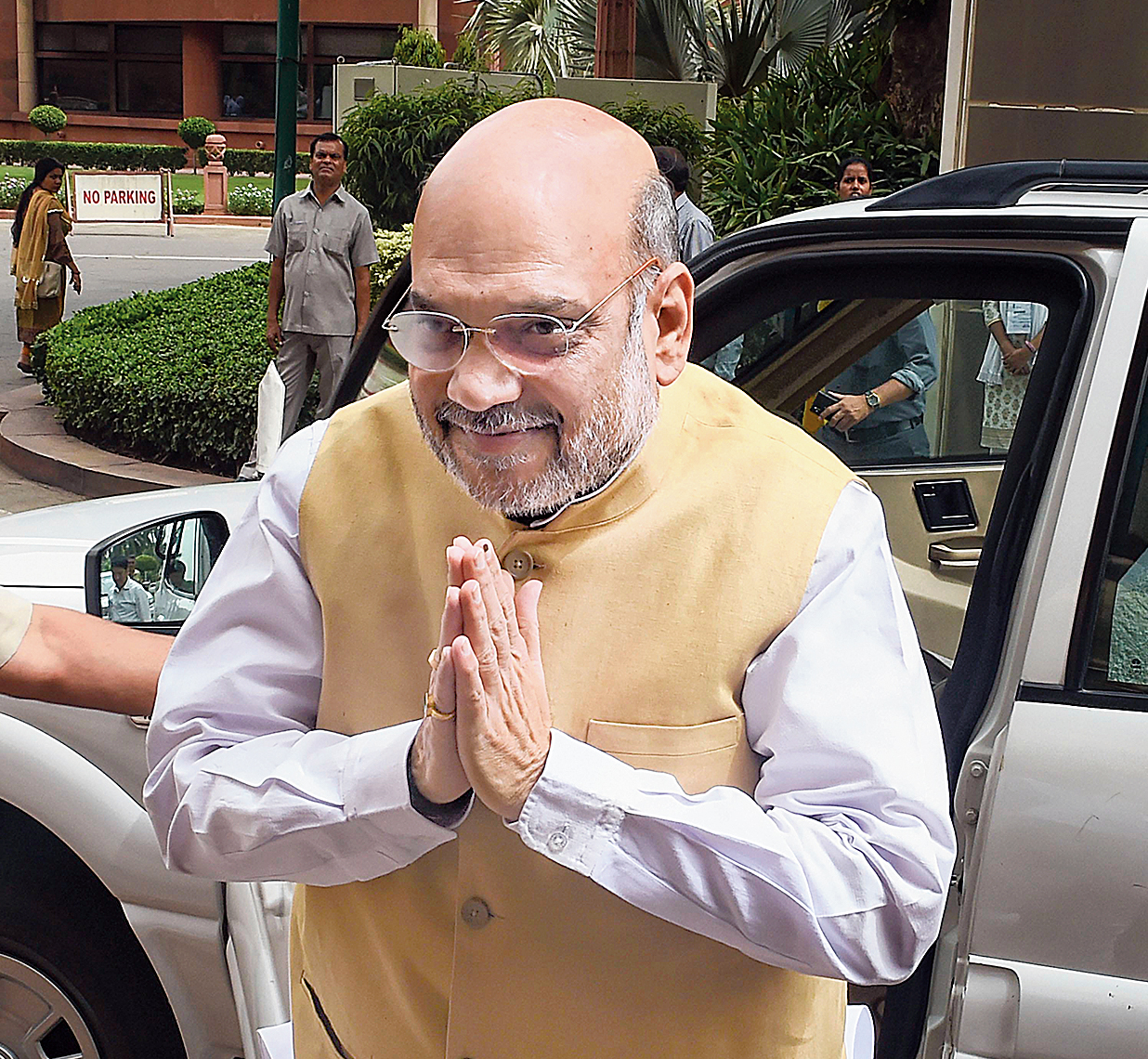 An unusually aggressive Amit Shah on Monday told the vocal Asaduddin Owaisi in the Lok Sabha to “develop the habit of listening” before adding he wasn’t trying to scare anyone but couldn’t help it if someone harboured “fear within”.

The exchange took place during discussions on a bill that looks to empower the National Investigation Agency to treat overseas acts of terrorism as though they had happened in India, and which was pushed through the House despite Opposition protests.

It started when Owaisi, the All India Majlis-e-Ittehadul Muslimeen member from Hyderabad, intervened during a speech by policeman turned BJP member Satyapal Singh.

Satypal had claimed that a chief minister had warned the Hyderabad police commissioner not to act against an accused from a minority community in the 2007 Mecca Masjid blast case, threatening consequences if he did.

Owaisi got up and said the politician concerned was not a member of the Lok Sabha, so Satyapal should air his accusations on oath and furnish proof in the House. This led to uproar.

Shah rose to ask why Owaisi had sat quietly while DMK member A. Raja was speaking and was now interrupting the BJP member.

“You cannot have different yardsticks,” the home minister said. “Sunne ki bhi adat dal lijiye. Yeh nahi chalega, sunna padega (Develop the habit of listening too. This is unacceptable, you have to listen).”

Owaisi replied: “The home minister is trying to scare me but I’m not the one to get scared.”

Shah said he was not trying to scare anybody and was only underlining that Owaisi had chosen to disturb the BJP member but not Raja.

During the discussions, Opposition members insisted that the decision to push the National Investigating Agency (Amendment) Bill 2019 even before the passage of the Finance Bill was a violation of rules and norms. The Speaker dismissed the objections, saying the bill was important and its early passage would not hamper the financial business.

“To amend Section 6 of the act so as to empower the central government, with respect to a scheduled offence committed outside India, to direct the agency to register the case and take up investigation as if such offence has taken place in India,” the bill says. It also inserts new offences into the schedule.

Shah was belligerent also during his reply to the discussion after Opposition members suggested that increasing the agency’s powers could lead to misuse, and that strong anti-terror laws tended to be harnessed to harass Muslims.

They cited the alleged misuse of past anti-terror laws such as Pota, legislated during Atal Bihari Vajpayee’s rule, and Tada, brought in by Rajiv Gandhi’s government.

Shah backed Pota and accused the previous UPA government of repealing it to protect its “vote bank”. He said the Vajpayee government had never misused Pota, and its repeal had caused the spurt in terror attacks between 2004 and 2008, forcing the UPA government to establish the NIA.

“Let this be on record: Had Pota not been repealed, the Mumbai terror attack wouldn’t have taken place,” Shah said.

He said a strong law was needed to fight terrorism and denied that Muslims were being targeted, citing the firm action taken against Tamil Tiger militants in the past.

“If this House doesn’t show unanimity on a matter of empowering an agency that works against terror, it will boost the morale of the people who spread terrorism,” Shah said.

The bill received 278 votes for and 6 against, suggesting the Opposition had largely supported it.