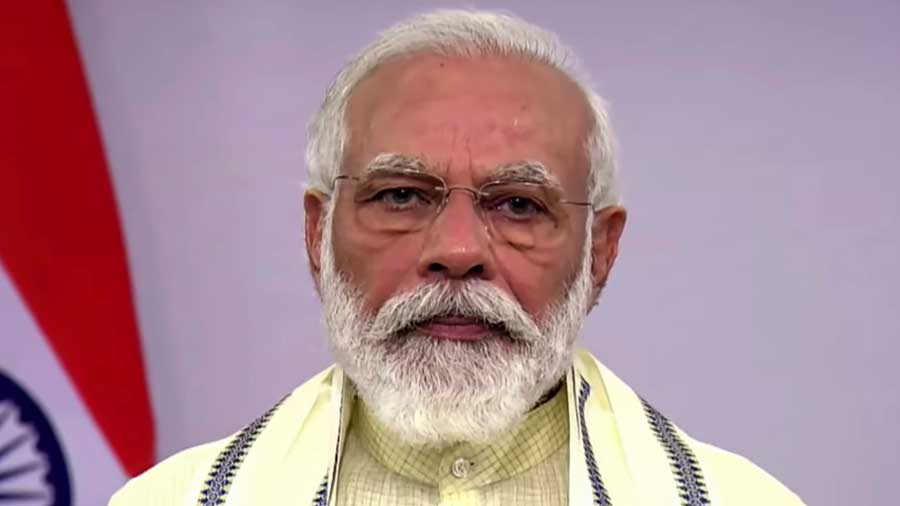 Narendra Modi is suddenly — and repeatedly — discovering a fact of life: like the arrow that sped from the bow, it is impossible to take back the words he had uttered with reckless abandon before 2014.

If the fire and brimstone Modi had unleashed on the then government over China backfired in the Galwan Valley last month, the daily increase in fuel prices has made his pre-2014 roar on the topic a cringe-worthy reminder that refuses to fade away.

Now, torment has come from another flank — all the way from Europe.

The Permanent Court of Arbitration at The Hague ruled on Thursday that India has no jurisdiction over the Italian marines who shot dead two fishermen off the Kerala coast in 2012. The court added that Italy should compensate India — something the Italians had earlier proposed.

The Hague court asked India to stop exercising criminal jurisdiction over Salvatore Girone and Massimiliano Latorre after Italy made a commitment to resume criminal investigations into the firing.

The court also noted that the two marines were members of the Italian armed forces and had acted in their official capacity, thereby enjoying immunity from Indian courts.

Then the chief minister of Gujarat but nursing national ambitions, Modi had milked the tragic incident to the maximum.

On March 13, 2013, Modi had tweeted: “On the issue of #Italian Marines, nothing short of their return to India must be the acceptable outcome…. UPA (the then Congress-led coalition in power at the Centre) should explain to the nation what action it plans to take to ensure the return of the #Italian Marines to India to face trial.”

Closer to the general election that catapulted him to the Prime Minister’s post, Modi tweeted in March 2014: “Italian marines mercilessly killed our fishermen. If Madam is so ‘patriotic’, can she tell us in which jail are the marines lodged in?”

Now that the Hague court has ruled India cannot try the Italians, Prime Minister Modi has the chance to unleash on Italy the choice of weapon — “lal aankh (red eye or stern response)” — he had kept reserved for China.

If Modi does not do what he had accused the UPA of not doing, he would find himself in a situation that Shakespeare meant when the Bard used the phrase “hoist with his own petard”.

Reacting to the Hague verdict, external affairs ministry spokesperson Anurag Srivasata said: “India has taken note of the award and will be in touch with relevant entities on the matter.”

Sources in the National Investigation Agency (NIA) in New Delhi described the tribunal order as a “setback” for India.

“India had taken a stand right from the beginning that the Italian marines should be tried in India as they were in Indian waters when they killed two fishermen. Compensation was never our primary argument,” said an NIA official.

The UPA government was in office at the Centre and the Congress-led front in power in Kerala when the Italian marines shot dead two Indian fishermen on suspicion of piracy.

Although Modi used to describe then Prime Minister Manmohan Singh as weak, the UPA government had in 2013 temporarily downgraded ties with Italy.

New Delhi had refused to send its ambassador-designate to Rome in retaliation to the Italian government’s decision not to send the marines back unless the Indian government gave an undertaking that they would not face the death sentence.

The Indian Supreme Court also temporarily barred the Italian ambassador from leaving India after Rome went back on its assurance to send the marines back after they had voted in the country’s elections.

After 2014, the Modi government sought to dial down the tensions with Italy on the issue even as the case went into arbitration. Both the marines were allowed to return -- on health grounds in the case of Latorre -- with the court’s permission.

An explosive element was added later when British arms agent Christian Michel, currently in Indian custody in the AgustaWestland helicopter scam, had claimed that Modi had offered his Italian counterpart the freedom of the two marines in exchange for information against Congress president Sonia Gandhi and her family in the chopper case.

In a letter to the International Tribunal of the Law of the Seas in Hamburg and the PCA in December 2015, Michel claimed Modi had made the offer at a “brush-by” meeting with then Italian Premier Matteo Renzi at the UNGA in September 2015.

The Italian marines, Girone and Latorre, claim the killings were accidental, saying they had mistaken the fishermen for pirates and fired warning shots while guarding the Italian oil tanker Enrica Lexie.

On Thursday, the court in the Hague said the two parties should consult and decide the amount of compensation, awarded “for loss of life, physical injuries, material damage to the vessel and moral harm suffered by the commander and crew of the fishing vessel”.

It rejected Italy’s claim that India had breached provisions of the United Nations Convention on the Law of the Sea by directing Enrica Lexie to “change course and proceed into Indian territorial waters through a ruse”, starting criminal proceedings against the marines and ordering their detention.

India has always insisted that the two marines were on board the Italian-flagged oil tanker, sailing from Sri Lanka to Djibouti, when they shot dead the two Indian fishermen approximately 20.5 nautical miles off Kerala in India’s Exclusive Economic Zone. Italy maintains that these are international waters and beyond India’s jurisdiction.

The Hague court also said, in the face of Indian opposition, that it would retain its jurisdiction in the matter if either country or both wish to apply for a ruling on the compensation amount due to India.

The court’s decision that the men should face trial in Italy, rather than in India, was hailed as a victory by the Italian foreign ministry.

“Italy’s arguments have prevailed after long years of (legal) battles. Our two soldiers, Italian officials who were carrying out their duties, are immune from foreign justice,” foreign minister Luigi Di Maio wrote on Facebook.

The case had strained bilateral relations, with Rome accusing the Indian coastguard of compelling Enrica Lexie to proceed to Kochi port after the firing took place in international waters.

The controversy also cost the then Italian foreign minister, Giulio Terzi, his job.