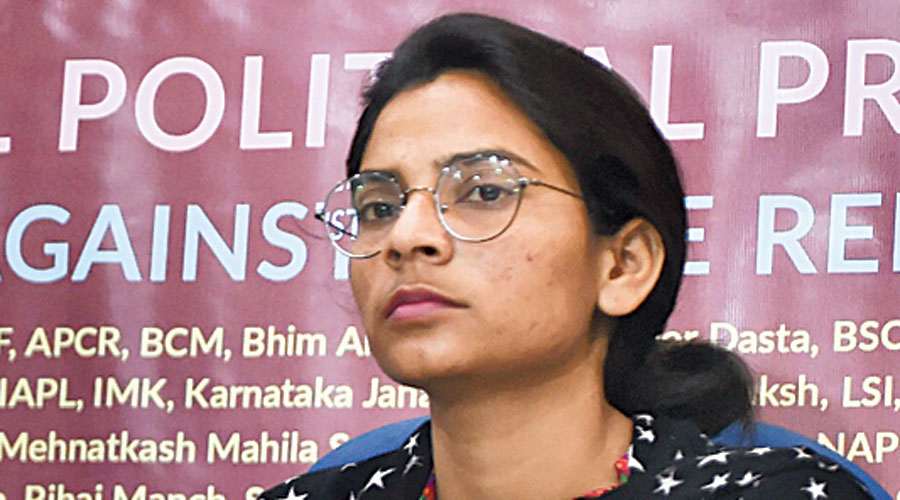 ABVP activists disrupted a Women’s Day event outside Delhi University’s arts faculty on Monday evening and allegedlyroughed up some of those present.

One of the scheduled speakers at the street-corner event was the recently released labour activist Nodeep Kaur, who had drawn international attention after US Vice-President Kamala Harris’s niece Meenakshi “Meena” Harris tweeted against her arrest and alleged custody torture.

Nodeep, a Dalit woman who was also part of the farmers’ agitation, was freed on bail on Sunday after 44 days in Haryana’s Karnal jail. She is charged with attempt to murder at a protest against erratic wages in January.

“Rajveer was speaking about the Butana gang rape (allegedly by police in Haryana last June) and the Gurhmandi case (the mysterious suicide by a domestic worker in Delhi last October) when ABVP (activists) came and tore our posters, shouting slogans,” Nodeep told The Telegraph.

“Police were with them. On Women’s Day we (have to) speak out about how culprits who have raped or killed Dalits roam free. Anyone who speaks out is attacked, but if we stop speaking then we will be silenced forever.”

The ABVP-led Delhi University Students Union (DUSU) said in a statement that men present at the event had “attacked” its joint secretary (Shivangi Kharwal).

“DUSU was conducting an event of self-defence training programme for girls where Delhi police personnel and other defence trainers were present to train girls. Right outside the venue of the programme, outsiders and ex-students of the university had organised an event wherein posters with objectionable slogans such as ‘Indian Army Rape Us’ were displayed,” the statement said.

“Objectionable slogans were raised just as a few girls led by Shivangi Kharwal (of the ABVP) were passing by. Seeing the anti-army posters, they questioned the organisers about the motive of the event. In a reaction to the questions posed by Shivangi and her friends, the men present on the spot attacked the Delhi University Students Union joint secretary (Kharwal).”

The poster mentioned by the students’ union depicted a protest by women in Imphal against the 2004 murder and rape of Thangjam Manorama, allegedly by Assam Rifles personnel.

Members of the Manch and CPM student arm SFI were briefly detained at the Maurice Nagar police station. Deputy commissioner of police (North) A. Anto Alphonse had not responded to a call and a message from this newspaper till late Monday night.

Vasu Kukreja, a Bhim Army lawyer who said he was at the spot to meet Nodeep, alleged that Kharwal had roughed him up.

“The disruption by the ABVP started while Rajveer was speaking. As I tried to record it with my mobile phone, some ABVP person tried to snatch it,” he said.

“When I resisted, a woman whom people there identified as Shivangi caught me by the collar and slapped me.”