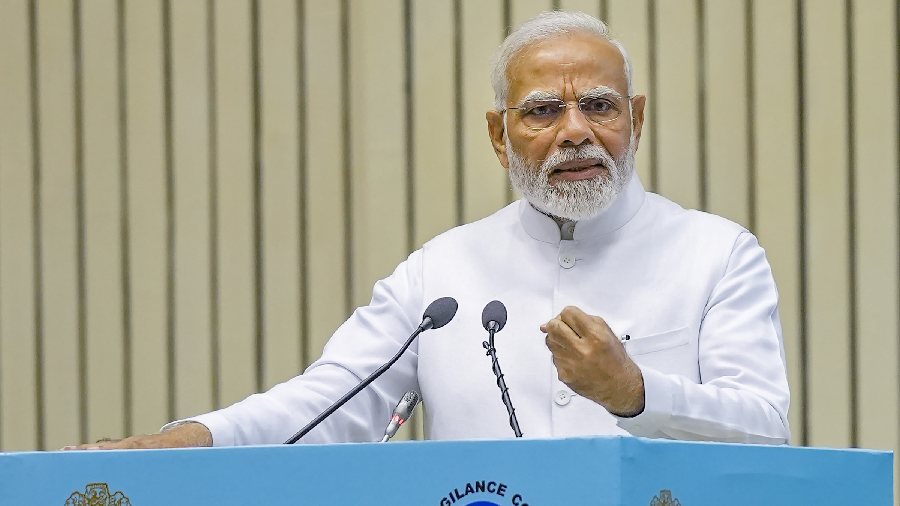 Prime Minister Narendra Modi on Saturday said the country is watching people's anger against family politics and alleged corruption in Telangana and assured them that those who "loot" the poor will not be spared.

Modi also made light of criticism by leaders of the ruling TRS and other parties against him, saying the "2-3 kg" of abuses he receives everyday keeps him going to serve people as such words are the "nutrition" that turns the harsh remarks into positive energy. He said some people, out of disappointment, depression and fear have 'exhausted' the dictionary to abuse him.

In strong remarks aimed at the Telangana Rashtra Samithi(TRS) and Chief Minister K Chandrasekhar Rao, Modi alleged that the party on which people reposed faith has betrayed them, adding the state needs a government that works for all families and not just one. He, however, did not name the TRS or KCR.

Modi was addressing BJP workers at the Begumpet airport here soon after his arrival on a visit to the state. Like in the recent past, KCR did not receive the prime minister at the airport.

The prime minister also asserted that 'Lotus will bloom' everywhere in Telangana, remarks that come ahead of the 2023 Assembly elections in the state where the BJP is making vigorous efforts to challenge the TRS. Lotus is BJP's party symbol.

Reacting to Modi's remarks, TRS MLC K Kavitha said he came empty-handed without announcing anything and that he only delivered "empty" words.

"Today Prime Minister Modi came to our State. He came empty-handed...other than delivering empty words, he doesn't do anything good for us," said Kavitha, daughter of KCR.

Recalling his earlier speech from the Red Fort where he spoke against family politics, Modi said the country is watching people's anger against alleged corruption and family politics in Telangana.

"I assure the people of Telangana today. Those who loot the poor will not be spared," he declared.

Some people are trying to unite to save themselves from action and form an alliance of the corrupt, but people of Telangana and the country are watching this, and understand what is happening, he said.

Corruption and family politics are the biggest enemies of the poor and development, and the BJP is fighting against them, he added.

The prime minister said the people who flourished and got power in the name of Telangana have pushed it backward.

"The government and the leader here continuously do injustice to the capacity of Telangana and the talent of the people of Telangana. The party which the Telangana people trusted the most, the same party has done the biggest betrayal to Telangana," he charged, without naming TRS.

However, the Lotus starts blooming in circumstances when there is darkness, he reiterated.

Modi also said superstitions are being practised in Hyderabad, known for its information technology ecosystem, and that such beliefs decide governance, in remarks that appeared to be aimed at Chief Minister Rao.

"Now, Telangana people want a government that works for all the families of Telangana instead of a single family," he added.

"They want a BJP government."

The prime minister said the agenda in politics should be service-oriented.

"But in Telangana the mandate of those who got mandate--their entire focus is to abuse Modi. Sometimes people ask me, Modiji, are you not tired. Yesterday, I was in Delhi in the morning then Karnataka, Tamil Nadu, Andhra Pradesh and now in Telangana. People ask me whether I don't get tired," he said.

"Then I will tell them that daily I consume 2-3 kg of abusive words. And God has created me in such a way, God has blessed me in such way that all those abusive words are processed and converted as nutrition in my system. It becomes positive energy which will be helped to serve the people."

He asked his supporters not to be concerned with such abusive language as the rivals were left with nothing other than such words.

"Don't worry about it. I for the past 22 years received a variety of abusive words. Just laugh at them, have tea. The Lotus will bloom. go with that happy feeling," he said.

Modi said those who abuse him day and night also keep on searching for new abusive words.

"I want to tell them, whatever quantity of abusive words you use against Modi, I will digest all of them. You abuse BJP, no problem. We grew like that. But if you abuse the people of Telangana, then it becomes give and take," he warned.

In an apparent reference to TRS' frequent attacks against him, Modi said he remains unperturbed by such criticism and appealed to the BJP activists in the state to not to worry about it.

Referring to the recent bypoll to Munugode Assembly seat where BJP stood second, he said the way the people of the constituency showed confidence in the party was, according to him, unprecedented. The TRS bagged the seat.

The BJP workers have brought the entire Telangana government to one Assembly segment (Munugode), he said.

People's blessings are with the party, he added.

"In recent times, wherever bypolls were held, the message is loud and clear that the sunrise is not far in Telangana. Darkness will vanish. Lotus will bloom everywhere in Telangana," Modi said, referring to the BJP's successes in Dubbak and Huzurabad Assembly bypolls during the last two years.

He spoke about the NDA government's efforts in direct benefit transfer, removing corruption in the process.

He said the Telangana government talked about building double-bedroom houses for poor but it did not let houses to be constructed under the PM Awas Yojana.

"Today, Telangana wants positivity, progress that only BJP can give," he added.

'Lotus will bloom across Telangana'