All of us worship Ram, says Kejriwal, as he promises free pilgrimage 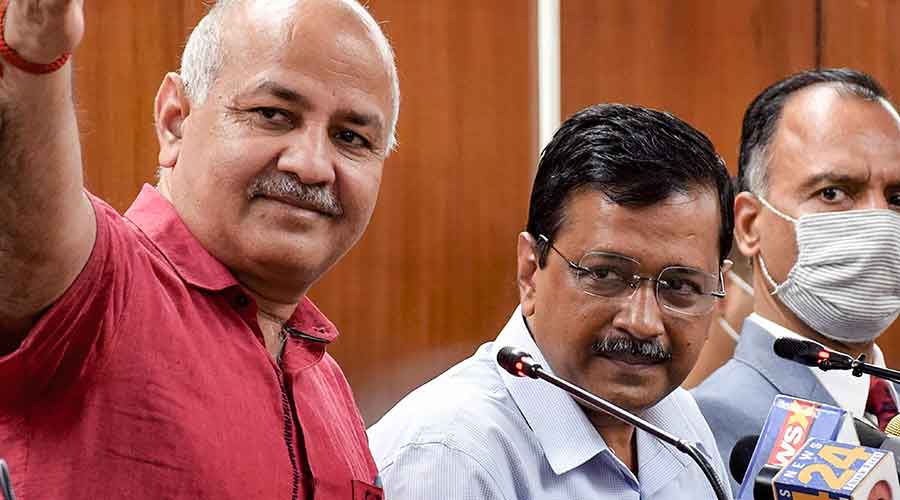 The Aam Aadmi Party government plans to install 500 Tricolours across Delhi as part of an avowed “deshbhakti (patriotism) budget” that also promotes yoga and Ayodhya pilgrimage, appearing to compete with the BJP in grabbing the nationalist and majoritarian space.

Chief minister Arvind Kejriwal told the Assembly on Wednesday his government was striving to establish “this model of Ram Rajya in Delhi”, although he defined the concept in terms of welfare measures such as education and healthcare along with state-funded pilgrimages to Ayodhya.

In the budget presented on Tuesday, his government had set aside Rs 45 crore to erect across the capital 500 Tricolours, which an independent expert estimated would be about 100 feet tall.

“I propose that in the 75th year of Independence... all citizens of Delhi, when coming out of their homes even for short distances, do not return without similar sentiments of patriotism and national pride,” deputy chief minister Manish Sisodia said in the budget speech.

“With these 500 Tricolours... we will decorate our entire city in such a way that even if you pass through one or two kilometres in Delhi, you will find a flag waving high.”

The Rs 69,000-crore budget focuses on 75 weeks of celebrations, from March 12 until Independence Day next year, with various public events.

Sums of Rs 10 crore each have been set aside for programmes on Bhagat Singh and B.R. Ambedkar. The budget proposes a new Sainik School and a defence preparatory academy.

It proposes yoga instructors for neighbourhoods – something not usually identified with patriotism outside the BJP-RSS ecosystem.

“During his rule, it is said, people were content, with no sorrows in life as they had access to all basic facilities…. Hence, we have been constantly striving to establish this model of ‘Ram Rajya’ in Delhi for the past six years, based on 10 principles.”

He said these principles included food security, quality education, the best healthcare, free electricity and water for those who consume less, employment, public housing, security for women and the state-funded pilgrimages for all faiths introduced in 2019.

Kejriwal said: “After the Supreme Court judgment (handing the disputed plot in Ayodhya to Hindus), a magnificent temple is yet to be constructed. I would like to declare before senior citizens of Delhi that once the temple is constructed, I will ensure that all of you can visit the Ayodhya temple free of cost.”

Many saw in the visual spectacle of the proposed flags a low-cost challenge to the Centre’s Central Vista project to redevelop Lutyens Delhi.

Kejriwal has over the past couple of years abandoned his strident opposition to Hindutva politics, choosing instead to project the AAP as a benign Hindu outfit with better credentials than the BJP in upholding nationalism and the majority faith.

On Tuesday, when reporters drew parallels between the AAP budget and the Centre’s thrust on nationalism, Kejriwal had said: “The central government is of this country; the Delhi government, Madhya Pradesh government are all of this country. We will all celebrate (the 75th anniversary) together.”

When a reporter asked him to define patriotism, he said that for him it meant being proud of India, obeying traffic rules, and not taking bribes.

“This kind of cartographic nationalism has become a counter-narrative to people’s aspirations. This will clearly tell us the directions in which the AAP is going,” he told The Telegraph.

“The thing with welfare is that once it is fulfilled, the second time around the demands will be much bigger. The AAP pre-empts that — they know the mood (of hyper-nationalism) that the BJP has built.”

Research by American psychologists Markus Kemmelmeier and David G. Winter, published in the journal Political Psychology in 2008, found that college students gave more nationalistic responses to questionnaires designed to measure patriotism and attitudes to authoritarianism when the American flag was visible in the room.

The display of the national flag increased greatly in the US after the Twin Tower bombings in September 2001.

Authoritarian Turkish President Recep Tayyip Erdogan — in power since 2003 — has promoted the display of the national flag and the slogan “One nation, one flag, one state”, particularly when faced with dissent.

Turkish political scientist  Asli Cirakman wrote in 2011: “On ordinary days, flags hang out of windows and shops and are displayed on the rear panels of cars much more often than before. Daily the nation is indicated, or ‘flagged’ in the lives of its citizenry to protest against Kurds, the European Union, the USA, or political Islam, depending on the specific political agenda of the day.

“National identity is being underlined not by hanging out flags on official days from official buildings (for which there is specific legislation), but by citizens’ daily assertions in initiating the flag to become visible against the ‘enemies’.”

In India, supporters of the Narendra Modi government as well as its critics — such as the protesters against the new citizenship and farm laws — have made use of the national flag.

Delhi has several permanent flag installations, most notably a 207-foot-tall one at Connaught Place that is illuminated at night since the flag code prohibits the Tricolour from being flown in the dark.

In 2016, the Centre had urged all central universities to erect similarly large, 24-hour flags.

The Connaught Place flag was put up by the Flag Foundation of India (FFI), an NGO funded by industrialist and Congress politician Naveen Jindal that has erected such flags at several places in India.

An FFI source said the cost of a steel flagpole went up “exponentially” once it crossed 100 feet, and that flag tears caused by winds became more frequent at higher altitudes.

Nowadays the FFI recommends only 100-foot-tall flagpoles. The FFI source said the Rs 9 lakh set aside per flag by Sisodia’s budget suggested that Delhi’s flags would be about 100 feet tall.

“The Connaught Place flag has to be replaced five to six times a year because of tears. Repairs are done every month for damage to the large flag,” the source said.

“A new flag costs around Rs 60,000. We are not charged for power. The monthly maintenance costs and the guards’ salaries come to around Rs 40,000.”

The illumination consumes around 2,400 units of power a month.

A quarter of the budget has been earmarked for education, with the proposals including a new university, a new board of education, 100 schools of excellence, and a virtual school.

For students of government schools, the budget suggests mentorship volunteers — people from various professions who would offer career counselling.

One of the big-ticket proposals in the budget is to bid for the 2048 Olympics. The budget talks of increasing the average income of citizens 16-fold before the centenary of Independence in 2047.