A valorous battle for dissent 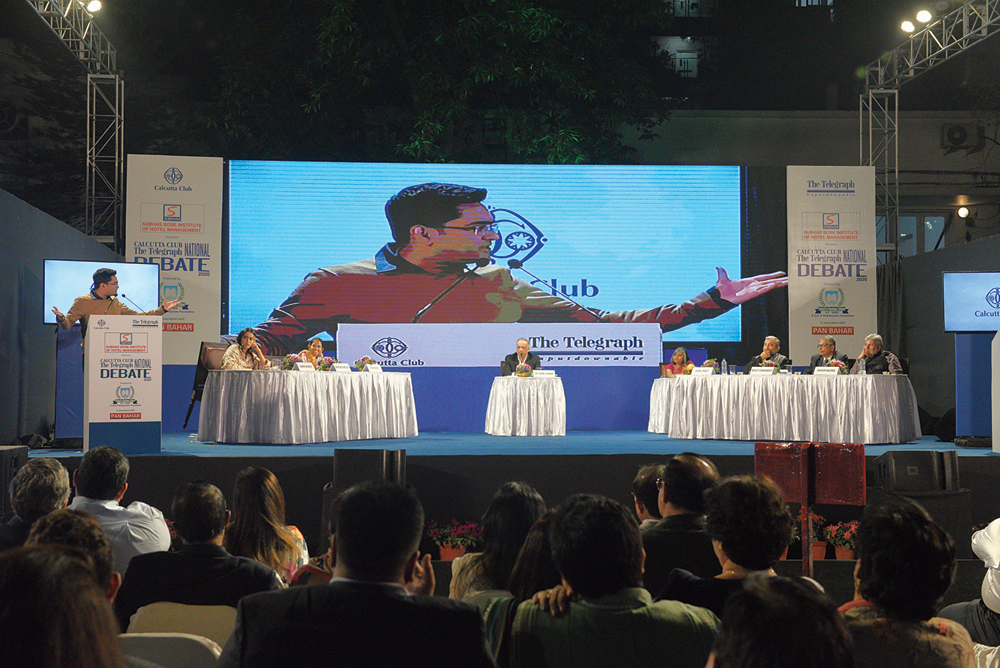 Dissent is at the bottom of all debate, but when the debate itself is over dissent you can expect it to turn into diatribe.

As it did several times on Saturday evening during the Calcutta Club The Telegraph National Debate 2020, presented by the Subhas Bose Institute of Hotel Management, powered by Calcutta Business School, a unit of Shikshayatan Foundation, in association with Pan Bahar.

So when Rightwing influencer Sushil Pandit burst out on JNU students and said their “tukde-tukde” dissent was not acceptable and it amounted to sedition, actress and activist Swara Bhasker lampooned him for getting his information from the “WhatsApp University”.

“All those videos were doctored, the court has said so, no chargesheet has been filed, I do not know where Panditji gets his information from, perhaps WhatsApp University,” Swara said.

Shishir Bajoria of the BJP turned on him with a list of “excesses” in Bengal which people were not allowed to protest or complain about. “I went to speak somewhere and I was told I will not be allowed to speak on the CAA and Ram Mandir, if I did, the stage will be brought down. Such is the state of affairs in Bengal.”

When it came to summation, Abhishek struck back with flaming firepower not usually seen in such debates, probably tilting the house in the slog overs.

Referring to Pandit’s charge that former chief ministers Omar Abdullah and Mehbooba Mufti are being incarcerated under the very Public Safety Act they had enforced, Abhishek said: “Sushilji is saying these people made the Public Safety Act. I am asking you if they made it, why did you form the government in alliance with Mehbooba Mufti?

Aishe Ghosh, president of the JNU students’ union, who was beaten up during the January 5 masked-mob attack on the campus, railed against dissent and vibrancy being crushed across campuses. Former Jadavpur University vice-chancellor Abhijit Chakrabarti countered her, saying student protests were “often beyond the legal framework and inspired by forces and ambitions from outside”.

Barbs flew across the stage all evening. The motion was that in today’s India, dissent has been made anti-national.

At one point, Abhishek suggested an alternative to selling off Air India, taking a potshot at Bengal governor Jagdeep Dhankhar who keeps complaining about being ignored.

“Save Air India. You are disinvesting LIC, an institution that has insured 70 per cent of Indians’ lives. First Air India, then Indian Railways, then IDBI, then LIC and next is Food Corporation of India. Why don’t you sell the Raj Bhavan? And since we are speaking about Raj Bhavan, I should actually ask the moderator did we take permission from him for having this debate at Calcutta Club? Because he might feel humiliated, you never know.

“I am just asking you, why don’t you do anything about the Raj Bhavan? In these times, Raj Bhavans are only being treated as BJP leaders’ post-retirement mansions and extended party offices. You are selling LIC. If your governor has any problem in finding a home, I am saying on record I will vacate my house.”

When halt had been called by moderator Kunal Sarkar to the incessant jousting and the issue put to vote, the audience sent the motion through with a loud voice vote: dissent, it was convinced, had indeed been made anti-national.

There was no curtailment of dissent, the team opposed to the motion, contended; dissent is democratic and it must be allowed.

But where, the side for the motion wondered, often with incredulity.

“We have a government that wants to decide what you are if you eat poha,” Abhishek chided his opponents in an indirect reference to a recent statement by BJP leader Kailash Vijayvargiya.

“A comedian gets an airline ban for behaving with (TV anchor) Arnab Goswami like Arnab Goswami, former chief ministers of Kashmir are labelled terrorists and locked up under draconian laws. Why? Just because the government does not approve.”

“The former chief ministers of Kashmir were calling for revolt and rebellion,” Pandit, himself a Kashmiri, hit back. “Mehbooba said whoever dared to touch Article 35 will have not just their hands but the entire bodies charred. Omar said if something happened to Article 35, they will have to review Kashmir’s accession. And you think they should not be in jail?”

Visibly riled at the repeated references to the government’s repressive measures in the Valley, Pandit recoiled: “I am a Kashmiri Pandit and I will tell you who was not allowed dissent. We were thrown out of our Valley homes, there was a genocide, and nobody said a thing for us, where was dissent then?”

Swara responded, saying she entirely sympathised with what happened to the Pandits and supported their right to return to the Valley and reclaim their homes. “But that does not mean we turn merciless on the Muslims of Kashmir which is what is happening. Why is Sudha Bharadwaj in jail? Why is Dr Kafeel Khan who saved thousands of infant lives in Gorakhpur in jail? Just because they dared to dissent and this megalomaniac government does not like dissent.”

Name a freedom we do not enjoy, Pandit dared.

“Then why are we being crushed for opposing fee hikes and lack of scholarships in universities?” Aishe argued.

But Shaheen Bagh has been going on for two months, Bajoria butted in, adding, with due sarcasm: “Although now that the Delhi elections are over, it has vanished from the media and so has the biryani.”

That’s been the source of fair loads of food for thought these past weeks, hasn’t it? Biryani? Not sure they added it to the evening’s special menu at the Calcutta Club tonight.