Advertisement
Home / India / A government geared to halt, not the Chinese but farmers
'Dilli chalo' call to repeal farm laws

A government geared to halt, not the Chinese but farmers 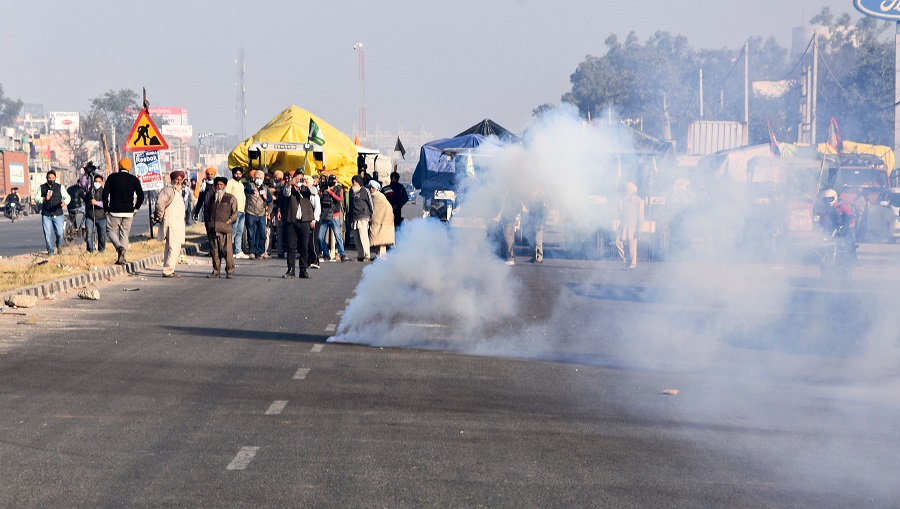 The Delhi Police on Friday used tear gas shells to disperse a group of farmers who had reached the Singhu border as part of their 'Delhi Chalo' march to protest against the Centre's new farm laws, a senior police officer said. The shells were fired at the border point which connects Delhi with Haryana. The police officer said, "We are using tear gas to disperse protesting farmers. We are also informing them that in view of the COVID-19 pandemic, any kind of rally and dharna is not allowed. They have been denied permission and legal action will be taken against them if they still try to enter Delhi." Security has been strengthened at the border and sand-laden trucks and water cannons have been stationed. Barbed wire is also being used for fencing at the Singhu border to prevent the protesters from entering the city.
PTI
Anita Joshua   |   New Delhi   |   Published 27.11.20, 03:50 AM

The might of the State was unleashed to prevent protesting farmers entering Delhi on a day dedicated to the Constitution, which begins with “we the people”, triggering a political slugfest and calls for intensification of the agitation against the new farm laws.

Haryana police used heavy construction equipment on Thursday to position boulders as protection for their barricades, and employed crowd-control vehicles to prevent the farmers approaching Delhi. This, after drenching the marching farmers from Punjab with water cannons on a cold and bleak Wednesday.

A collective of farmers’ organisations has given a “Dilli chalo” call to press the Centre to repeal the three new farm laws and introduce a bill that guarantees a minimum support price (MSP) for the farmers.

The Haryana police action attracted more publicity for the agitation, the sight of farmers drenched with water cannons drawing sympathy even from the chattering classes who are generally unmoved by such issues.

As visuals of the crackdown began circulating online, the Rakesh Tikait faction of the Bharatiya Kisan Union, which has not joined the all-India platform of farmers’ and farm workers’ organisations, called for an indefinite blockade of all national highways from Friday.

The call is likely to be most effective in western Uttar Pradesh, where the organisation wields influence.

Asked about the faction giving its own call, Hannan Mollah of the All India Kisan Sabha said Tikait was clearly feeling isolated in the face of the support the farmers were receiving and had decided to join in.

Tikait’s call remains an independent one and is not part of the programmes of the All India Kisan Sangharsh Coordination Committee (AIKSCC), which is now gearing for the possibility of the farmers from Punjab entering Delhi. The farmers have managed to push past the barricades at eight points on the Haryana-Punjab border.

AIKSCC leaders said the Punjab farmers had initially planned to hold pickets wherever they were stopped. But Wednesday’s water-cannoning by the Haryana police and the multi-layered barricading -- as though it was the Pakistan border -- agitated them so much that they decided to march on.

Now that they have crossed into Haryana, the authorities' entire focus is on barricading Delhi, where the borders were sealed for the major part of Thursday.

The Centre’s apprehension is that if the farmers are allowed to enter Delhi, they may well start a prolonged agitation as the Punjab farmers, in particular, are moving with rations to last them a fortnight.

“The three farm laws are anti-farmer. Instead of repealing these laws, the government is preventing the farmers from protesting peacefully and using water cannons against them,” he tweeted in Hindi. “This crime against the farmers is wrong. It is their constitutional right to protest peacefully.”

A verbal battle broke out between the Congress chief minister of Punjab and his BJP counterpart in Haryana.

Urging the BJP not to ask its state governments to use strong-arm tactics against the farmers, Amarinder Singh of Punjab said: “The hands that feed the nation deserve to be held, not pushed aside.”

He underlined that the farmers had been protesting peacefully in Punjab for two months and asked why the Haryana government was provoking them by using force.

“Don’t the farmers have the right to pass peacefully through a public highway?” Amarinder tweeted.

“It’s a sad irony that on #ConstitutionDay2020 the constitutional right of farmers is being oppressed in this manner. Let them pass @mlkhattar ji, don’t push them to the brink. Let them take their voice to Delhi peacefully.”

Khattar responded by accusing Amarinder of inciting the farmers and lying, and said he would leave politics if there was any trouble over the farmers securing the MSP. The Haryana chief minister also asked Amarinder not to put people's lives in danger during the pandemic.

But this did not cut much ice, either with Amarinder or with the public in general, given that BJP leaders have themselves been holding rallies across the country through the pandemic.

“It’s the farmers who’ve to be convinced on MSP, not me. You should’ve tried to talk to them before their #DilliChalo. And if you think I'm inciting farmers then why are Haryana farmers also marching to Delhi?" Amarinder countered.

The Trinamul Congress reminded Haryana that it had always been viewed as a “farmer-oriented” state.

“But today, the policies undertaken by the central govt have brought farmers on the roads. The same water that cultivates crops is being used to quell protests! Is this how @BJP4India doubles farmers' income in their states?" the party tweeted.

While the Punjab farmers caught all the media attention because of the sheer numbers moving towards Delhi, smaller groups of farmers made for Delhi from Haryana, Uttar Pradesh, Madhya Pradesh and Rajasthan amid reports they were being stopped at various places and their leaders detained.

Elsewhere, farmers observed a “grameen hartal” (rural strike) in a show of solidarity with the nationwide strike call given by trade unions.

In Delhi, some farmers made it to Jantar Mantar but their efforts to stage a protest were foiled by the police, who rounded them up within minutes and took them to different police stations. Most of them had been let off by evening.

Since the “Dilli chalo” call was for November 26 and 27, the AIKSCC has asked farmers across the country to gherao central government offices and district headquarters on Friday.

Union agriculture minister Narendra Singh Tomar has invited the Punjab farmers for talks on December 3 but they are insisting the government talk to the farmers’ collective instead of trying to divide them state-wise.