75 years on, ‘that great, bitter battle’

Back to Kohima and an ‘if only’ moment linked to Bose 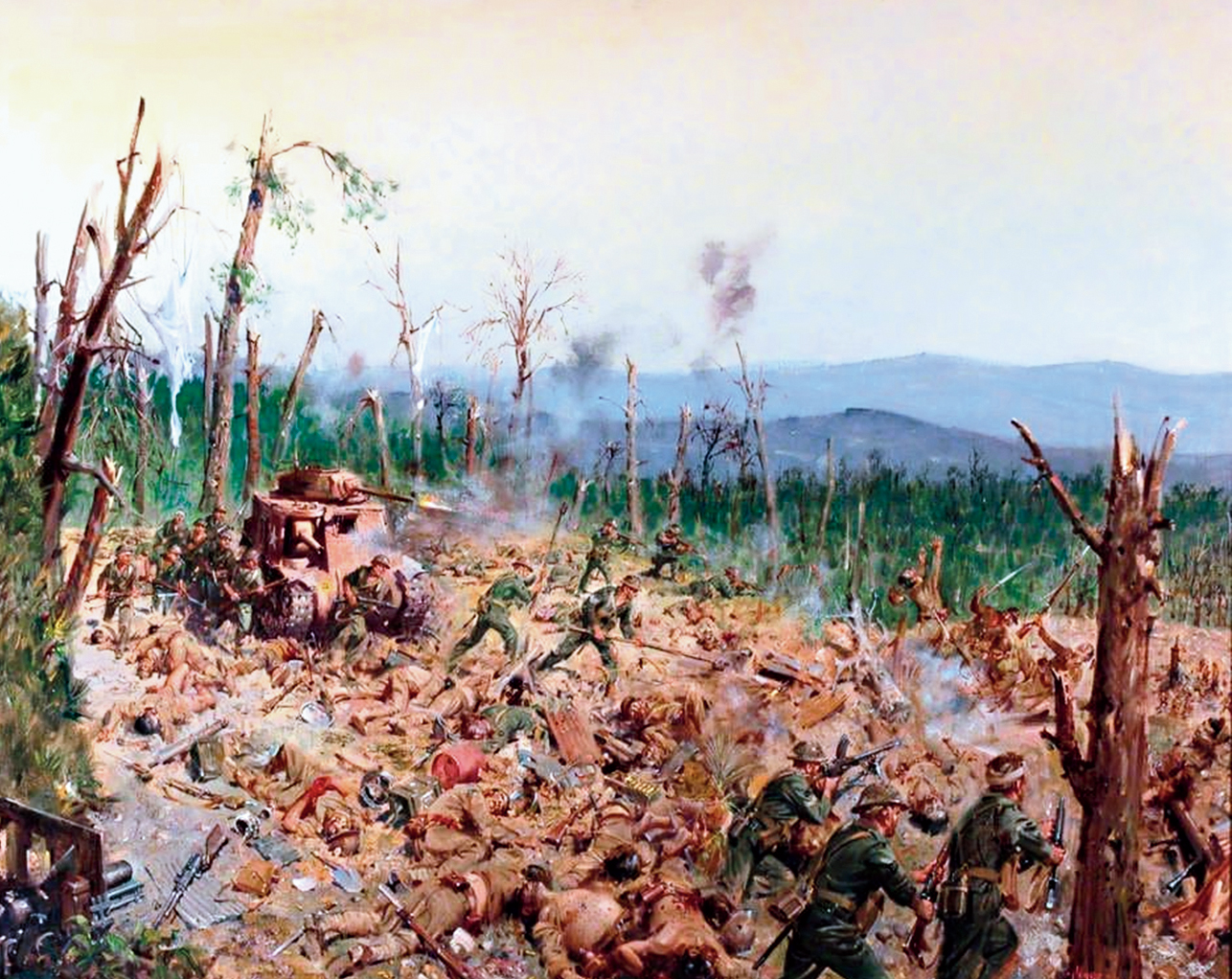 Seventy-five years ago, two island nations from opposite sides of the world fought the Battle of Kohima, one of the bloodiest combats in history, thousands of miles from their homelands and across a tennis court.

In a battle largely forgotten by Indians, the charming hill station of Kohima, nestled on a thickly forested ridge 5,000 feet above the sea level, became the scene of “Britain’s greatest battle”, as voted by the National Army Museum in London, edging out D-Day and Waterloo.

The fighting was so intense that the Battle of Kohima is often referred to as the “Stalingrad of the East”. It was one of the most decisive battles of the Second World War, thwarting the Japanese invasion of India and helping turn the tide in favour of the Allies.

The world at the time was preoccupied with Nazi Germany, and the Allies’ invasion of Europe had steered the spotlight away from Southeast Asia. The Battle of Kohima, which went on from April 4 to June 22, 1944, was overshadowed by news of the D-Day landings at Normandy, which began on June 6.

In Kohima, a tiny garrison of less than 1,500 British and Indian troops faced 15,000 soldiers of the Imperial Japanese Army. Outnumbered 10 to 1, the defenders fought the invaders hand-to-hand in a savage battle and prevented a Japanese victory that would have proved disastrous for the British.

It would be 13 blood-soaked days before reinforcements arrived, and another 67 days of hellish fighting until the Japanese would finally be driven out of British India, sealing the fate of Tokyo’s imperial ambitions in South Asia.

The rough terrain and dense forests of Manipur and Nagaland were important frontiers of what popularly came to be known as the Burmese front.

In December 1941, Japan, already at war with China, attacked British, Dutch and American territories in Asia and the Pacific.

On February 15, 1942, the British forces in Singapore surrendered to the Japanese. Then British Prime Minister Winston Churchill would later call the surrender “the worst disaster… in British history”. By June 1942, Japanese conquests encompassed a vast area of Southeast Asia and the western Pacific. In 1943, the Fourteenth Army, formed in India under Lieutenant-General William Joseph Slim, was tasked with retaking Burma from the Japanese.

In early March of 1944, the Japanese launched the U-Go offensive, and the first units of the Japanese 15th Army invaded India. As part of operation U-Go, the Japanese planned to split the 31st Division into three columns that would cut off the Kohima-Imphal Road and surround Kohima.

The failure of successive British offensives in the Arakan (now Rakhine state in Myanmar) had reinforced the Japanese high command’s low opinion of its opponents’ proficiency as jungle fighters. U-Go had twin aims: to pre-empt the Allies’ plans to retake Burma and to break into India through the isolated town of Imphal in the then princely state of Manipur.

A Japanese colonel, Kuniji Kato, later accurately called the fighting in Kohima “that great, bitter battle”. Lord Louis Mountbatten, India’s last Viceroy, described it as “the British/Indian Thermopylae”, comparing it to the heroic resistance a vastly outnumbered Greek army had offered the invading Persians in 480 BC.

For the British, the battle was critical since Kohima was the key to Imphal and the crucial supply depot at Dimapur, whose capture would enable the Japanese to consolidate and replenish their starving troops and kick off a campaign into India’s interior, towards Delhi.

The battle of Kohima took place in two stages. From April 3 to 16, the Japanese 31st Division attempted to capture the Kohima Ridge, but the small garrison held out against fierce and repeated attempts to destroy it. The deputy commissioner’s bungalow on the ridge was used as one of the main lines of defence.

After 13 days of resistance, elements of the British 2nd Division, the 161st Indian Brigade and tanks from XXXIII Corps fought their way in and relieved the garrison, finally balancing the strength of the two sides.

The deputy commissioner’s bungalow had been destroyed by heavy artillery and mortar fire and infantry assaults after witnessing some of the closest and grittiest fighting. Officers’ diaries recount how sniping duels seemed like “unending snowball fights”, how grenades were lobbed at point-blank range across the tennis court as if it were a tennis match, and how soldiers dug holes like beavers, burrowing or tunnelling themselves forward using plates, mugs, bayonets, entrenching tools and anything else they could find.

Today, white concrete lines denote the boundaries of the historic tennis court. The names of nearly 1,500 Allied soldiers who died are etched on the war memorial, the Kohima War Cemetery, with the famous epitaph: “When you go home/ Tell them of us and say/ For your tomorrow/ We gave our today.”

The governor of Nagaland, P.B. Acharya, recently suggested building a separate memorial for the Japanese soldiers.

Kohima handed the Japanese army its worst defeat in history. Thousands lay dead on a devastated landscape while tens of thousands more Japanese starved during a catastrophic retreat eastwards. They called the journey back to Burma the “Road of Bones”, where men committed suicide or dropped dead from hunger along the jungle paths.

The Japanese defeat came as a crushing blow to the hopes of Netaji Subhas Chandra Bose and the Azad Hind Fauj or Indian National Army (INA).

The strange irony of the Battle of Kohima was that Indian troops fought on both sides. Among the British forces were Jats, Rajputs, Sikhs, Marathas and Gurkhas whereas leading the Japanese advance were soldiers of the “Subhas Brigade” of the INA.

Bose had arrived in Southeast Asia on May 6, 1943, after a perilous 90-day submarine voyage to resurrect and lead the Azad Hind Fauj.

“Only when the blood of freedom-loving Indians begins to flow,” he declared in a broadcast in June 1943, “will India attain her freedom.”

Assuming the command of the INA he proclaimed, “Give me your blood, I will give you freedom” and sounded his famous battle cry, “Delhi Chalo (Onward to Delhi)”, which was echoed by the Japanese as “March on Delhi”.

In the preceding two weeks, a small group of Japanese and INA soldiers had combed the whole area. Their information was vital and, according to historian A. Swinson, “must rank as one of the most brilliant feats of reconnaissance in the history of war”.

In April 1944, fighting alongside the Japanese, the INA secured the first Indian victories in parts of Arakan, Manipur and Nagaland.

The advance, though, had a major flaw. The Japanese had brought 5,000 oxen with them to provide meat for the troops for 50 days but the tough terrain and the incessant rain killed a large number of the animals, triggering a food shortage.

The superior air power of the Americans aiding the British forces, and the rapidly degrading international situation for the Axis Powers, forced the INA to reluctantly retreat from the Indian front along with the retreating Japanese troops.

Would a Japanese-INA victory have led to Bose unfurling of the Indian flag at the Red Fort, and would it have prompted the Indian sepoys to switch loyalties and ignite a revolt within the British Indian army?

Hard to say, since Japan’s imperialistic plans were inscrutable. The Japanese had amply demonstrated their cruel methods of dealing with local populations while marching into Burma, and later into Nagaland, killing and pillaging with utter disregard for Bose’s ideals.

The Japanese had sidelined the INA throughout the war and “foreshadowed” their intent when they supposedly gifted “Shaheed Dweep and Swaraj Dweep” --- the Andaman and Nicobar Islands --- to Bose’s men but only allowed them limited governance.

The Kohima defeat may be seen as an “if only” moment that denied Bose his rightful place in history, albeit one achieved while riding on Japanese shoulders. He, however, was not a man who would have been content seeing one empire replaced by another in India.

Although the INA’s role in the Battle of Kohima could never have been militarily decisive, given its limited numbers and equipment, it had fervently wanted to spearhead the Japanese advance and, as Bose had hoped, oust the British from Indian soil.

But that was not to be.

Captain Deepam Chatterjee is a former army officer who writes and lectures on various subjects including military history, Hinduism and mythology. He can be contacted on deepamchatterjee@yahoo.co.in