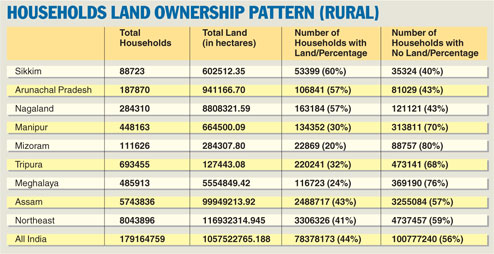 Shillong/Guwahati, July 3: Surpassing the national average, nearly 60 per cent of rural households in the Northeast have no land while manual casual labour is the main source of income, provisional data from the Socio- Economic and Caste Census (SECC), 2011 for rural India has revealed.

Across rural India, 30.1 per cent of the households depend on cultivation as the main source of income while 51.14 per cent are into manual casual labour.

While 0.37 per cent of the rural households across India depend on begging/charity/alms collection as the main source of income, the percentage in the Northeast for the same is 0.56 per cent, the data revealed.

The provisional socio-economic data for rural India was completed in all the 640 districts. The data will be used in evidence-based planning for rural development and poverty reduction needs to be undertaken immediately.

In an official communiqué, the Union rural development ministry has decided to use the SECC data in all its programmes.

The programmes include housing for all, education and skills thrust, MGNREGA, National Food Security Act, interventions for the differently-abled, interventions for women-led households, and targeting of households/individual entitlements on evidence of deprivation, and others.

The report found that 91,21,670 people in Assam could not read and write, which is the third highest number of illiterates after Arunachal Pradesh and Meghalaya in the Northeast.

Among the literates in Assam, only 2.21 per cent is either graduate or higher secondary (Plus II) pass.

In the field of employment and income, 12.27 per cent of the total households in Assam has salaried jobs. The total number of households in the state as per the census is 57,43,836.

Among the salaried households, 7.61 per cent is engaged in the government sector followed by 3.8 and 0.88 per cent in private and public sectors respectively.

Among the total households in the state, 8.7 per cent households comprise Scheduled Castes, 14.28 per cent Scheduled Tribes, 35.52 per cent from other castes and tribes and 41.49 per cent fall under the "others" category.