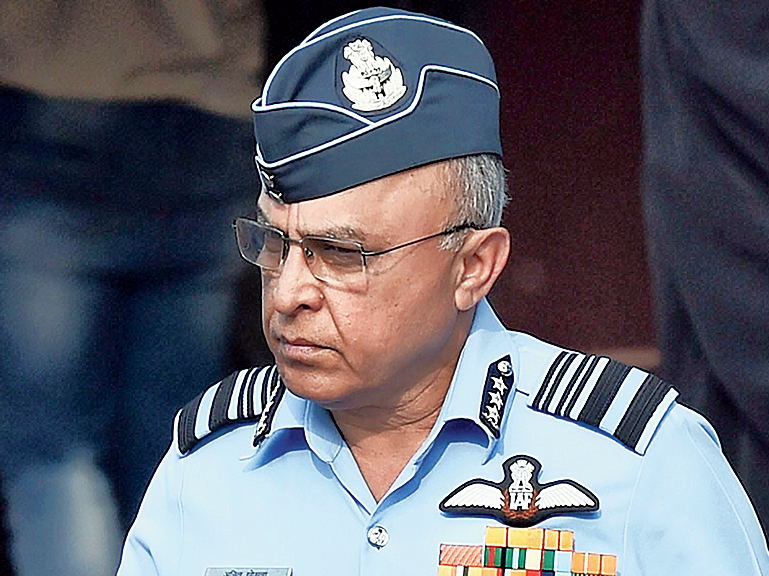 Air Vice-Marshall J. Chalapati, Air Marshal Anil Khosla and Air Marshal V.R. Chaudhari had to rush to the apex court at short notice after a bench headed by Chief Justice Ranjan Gogoi said it wished to interact with IAF officers as the controversy over the Rafale deal concerned them.

The officers told the bench that Sukhoi-30s were the latest to be inducted, and said the IAF had no four-plus or fifth-generation aircraft.

The bench had expressed its wish to interact with the officers when attorney-general K.K. Venugopal began his arguments on behalf of the Centre. He was opposing pleas for a court-monitored probe into the Rafale deal with France.

Chalapati, who appeared before the bench, answered all the questions asked by the CJI about the induction of fighter jets by India.

He said the country needed the fifth-generation aircraft, which have niche stealth technology and enhanced electronic warfare capabilities.

The CJI asked Chalapati: “What is the latest induction to the IAF?”

Chalapati replied that it was the Sukhoi Su-30MKI, manufactured by Hindustan Aeronautics Ltd at Nashik and Bangalore. He said that IAF was getting new Su-30MKI aircraft each year.

Justice Gogoi asked Chalapati which aircraft were being manufactured in India besides the Su-30MKI. The officer said he himself was a pilot and had a special liking for the light combat aircraft (LCA) that were being built in Bangalore but were yet to be inducted into the IAF.

The CJI asked the officer to which generation of aircraft the LCA and the Su-30MKI belonged.

The CJI asked whether it meant that the IAF currently required a few squadrons of fourth and fifth-generation aircraft. Chalapati said it did.

Justice Gogoi asked Chalapati whether any induction had been made to the IAF after the Mirage in 1985. The officer said it hadn’t, which led the CJI to observe: “It means (from) 1985 to 2018 there is zero induction.”

However, when the observation of “zero induction” was made, none of the advocates pointed out that the Sukhoi fighter jets had been inducted after the Mirage.

The CJI then said: “The air marshals can now leave. This is a different kind of war room and you all can go to your war rooms. Thank you.”