Advertisement
Home / India / 40 Trinamul legislators in touch with me: Modi

40 Trinamul legislators in touch with me: Modi 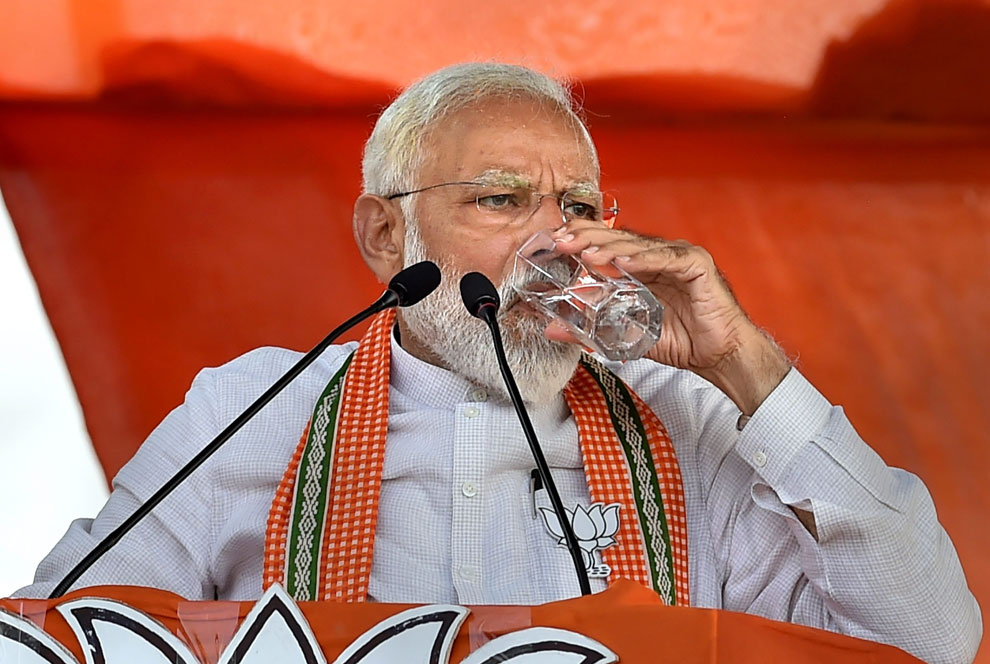 Prime Minister Narendra Modi on Monday claimed that 40 Trinamul Congress MLAs were in touch with him and insinuated they were looking to switch to the BJP after it wins the election, prompting Opposition accusations of “horse-trading”.

If such a declaration by a serving Prime Minister in the middle of elections is uncommon, that it was Modi who sprang the claim — or alleged statement of intent — makes it even more startling.

Modi has been portraying himself as the chowkidar of all things worth safeguarding. As a Prime Minister who wears the anti-corruption shield on his sleeve, a foregone conclusion would have been that he would have initiated immediate and exemplary action should even one MLA, let alone 40 of them, sounded him out on defection.

Instead, the Prime Minister appears to have sat on the information and spilled it on the campaign trail, which can only be seen as an open offer to would-be defectors after May 23 when the votes would be counted.

“Didi, apki zameen khisak chuki hay. Dekh lena, May 23 ke baad charo taraf kamal khilega. Tab apkey bhai apko chhorkar bhag jayengey, dekh lena…. Aaj bhi, Didi, tumharey chalis vidhayak merey sampark mein hain (Didi, the ground is slipping beneath you. Mark my words, the lotus will bloom in every direction after May 23. Your brothers will desert you…. Even today, Didi, 40 of your MLAs are in touch with me),” Modi told a rally in Chanditala, Hooghly, 25km from Calcutta.

Trinamul chief national spokesperson Derek O’Brien said the party would lodge a complaint with the Election Commission against Modi. “Expiry Babu PM, let’s get this straight. Nobody will go with you. Not even one councillor. Are you election campaigning or horse-trading! Your expiry date is near. Today, we are complaining to the Election Commission. Charging you with horse-trading,” O’Brien tweeted.

Telugu Desam Party chief N. Chandrababu Naidu raised a larger issue. “Betraying the spirit of democracy, belittling the office of a Prime Minister, and touching the height of absurdity, the PM of India stooped so low and claimed that 40 Trinamul Congress MLAs are in touch with him,” the Andhra Pradesh chief minister tweeted.

“This is nothing but horse trading, that too, when the election process is on and the model code of conduct is in force. The Election Commission of India shall immediately and suo motu take cognisance of these shameful remarks by the Prime Minister and initiate action against him.”

Modi’s attack on Mamata was particularly sharp on Monday, lending weight to suggestions that the BJP was hoping to make up in Bengal any losses it may suffer in the heartland. From Monday onwards, the voting will largely be concentrated on the Hindi heartland and Bengal.

Modi, addressing his seventh rally in Bengal this poll season, mocked Mamata’s alleged prime ministerial ambitions. “Didi, Dilli bahut dur hai (Didi, Delhi is far away),” he added, mouthing a statement made famous in folklore in the context of a battle between two medieval rulers of Delhi and Bengal.

Delhi sultan Ghiyasuddin Tughlaq had invaded Bengal and imprisoned its ruler, Ghiyasuddin Bahadur Shah, in 1324. On his way back, he ordered Sufi mystic Nizamuddin Auliya, with whom he had had a spat, to leave Delhi before he returned. Auliya is believed to have said in Persian: “Hunuz Dilli dur ast (Delhi is still far away).”

Indeed, on his way to Delhi, the sultan was killed when a wooden pavilion erected for his reception in Afghanpur, Uttar Pradesh, collapsed on him.

BJP sources said the state unit was “jubilant” at the Prime Minister’s no-holds-barred attack on Mamata and her party, which had an intensity that his speeches in Bengal have lacked so far.