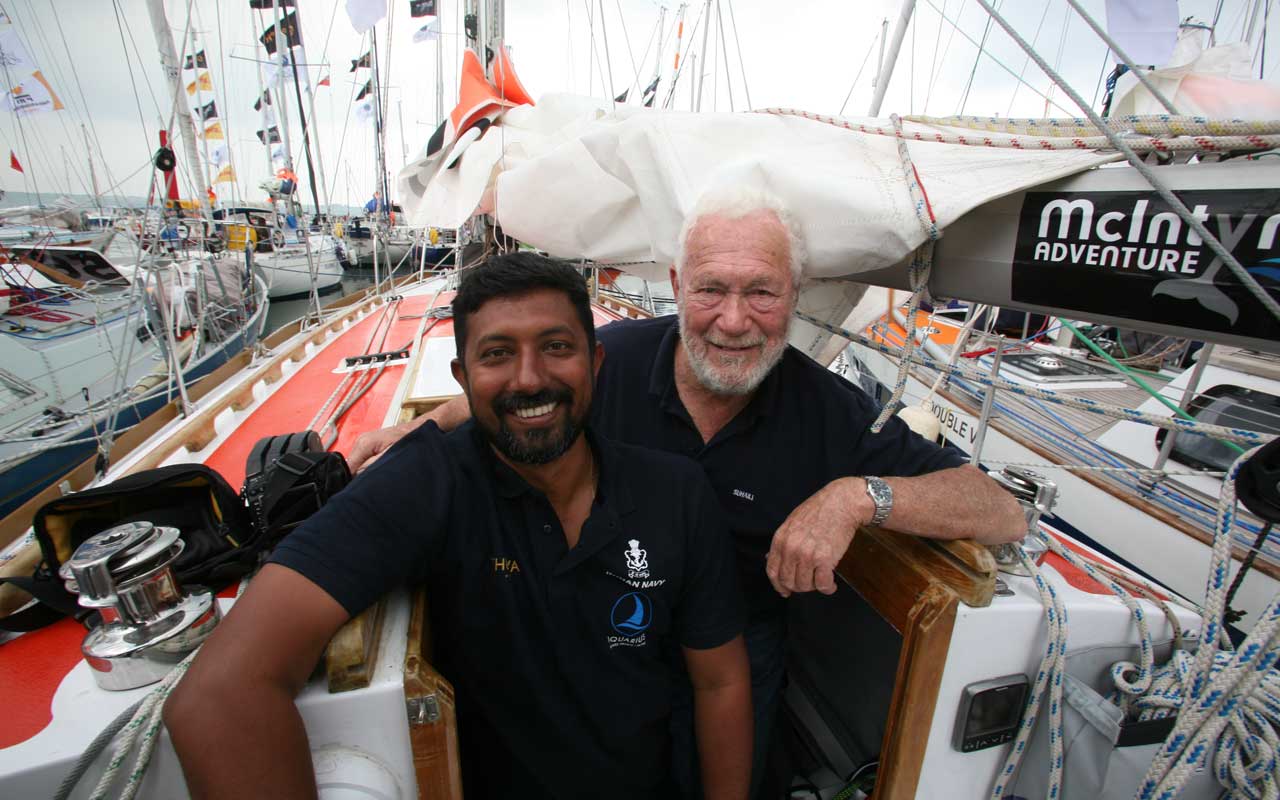 Commander Tomy is not new to such challenges. He became the first Indian to circumnavigate the globe in 2013.

GGR organisers are working closely with the Australian Rescue Co-ordination Center in Canberra, which has issued an all-ships alert and is co-ordinating efforts led by the Australian defence forces.

The Australians are also working with the French Maritime Rescue Centre on Reunion Island in the South Indian Ocean, which is attempting to source a vessel that might assist, including a French Fisheries Protection ship that is thought to be in the area.

Don McIntyre, the race chairman in Les Sables d’Olonne in France, where the Golden Globe solo non-stop round the world race began, said: “We are very grateful to all these international organisations for mobilising their resources so quickly and for the lead role taken by MRCC in Canberra.

The Golden Globe Race website says that in 1968, “nine men started the first solo, non-stop sailing race around the world. Only one finished'.

Right now on the website, there are names of 18 sailors who are in the contest to race their yachts around the world. Of them, seven have already quit. The indicator below the name of Commander Abhilash Tomy indicates he is still in the race.

HMAS Ballarat is on its way assist an injured solo yachtsman, approximately 1800 nautical miles off the WA coast. The sailor, an officer in the Indian Navy is understood to have suffered a serious back injury when his ten metre vessel, “Thuriya” was de-masted in extreme weather. pic.twitter.com/e5zgO6F7bj

Tomy’s yacht is a replica of the Suhaili, which Sir Robin Knox-Johnston sailed in 1968 and won. Sir Robin’s yacht was built in Bombay. Tomy’s vessel was made by Aquarius Shipyard Pvt Ltd in Goa. The Thuriya was launched in August 2017 and Tomy had been conducting sea trials in the Indian Ocean before shipping the yacht to Europe in March 2018. Sir Robin wished Tomy good luck for the voyage in a video. He was sitting in the Suhaili and said the SV Thuriya was her “little sister”.

Ships of the Indian and Australian defence forces have set out to rescue Indian naval Commander Abhilash Tomy, who is injured on his yacht in the South Indian Ocean, 1900 nautical miles off Perth.

Wind speeds of 130 kmph hit the officer’s yacht two days ago when he was in third position in the Golden Globe Race and had sailed over 10,500 nautical miles. Right now, according to news that has come from various sources, the commander has a back injury and is immobile on his vessel, a blue yacht called the SV Thuriya.

The Golden Globe Race is a gruelling 30,000-mile solo circumnavigation of the globe and Commander Tomy is the only Indian in the race this year. September 23 is the 84th day of the competition.

Another race, however, is on somewhere else - one to reach Commander Tomy. On land, 1,900 nautical miles would be 3518km. To give an estimate, if you drove from India's capital New Delhi to the country's southernmost tip, Kanyakumari, almost straight, you would still cover 2,800km.

On September 20, Commander Tomy told the race coordinator that his wind mast was broken but he was okay. This message, now a `Sound Cloud recording`, seems to have been the last long conversation Tomy had with anyone on land. While he was far out in the sea - the race started on July 1 - Pakistan got a new Prime Minister. The officer bantered with the coordinator on this, laughing. His boat was damaged, but he was fine, he said.

An Indian Navy aircraft located the vessel, a defence spokesman said on Sunday, but a rescue has not been possible. The spokesperson said all efforts were being made to rescue the commander whose yacht was hit by a vicious storm. 'INS Satpura and INS Jyoti are heading at top speed to reach Tomy,” the spokesman added.

He said the situation was being monitored at Naval Headquarters in New Delhi, as well as by the Joint Rescue Coordination Centre in Melbourne.

The Indian Navy's P8I aircraft, which flew out in the early hours of Sunday, located the 'mast broken boat rolling excessively', according to the defence spokesman, and the 39-year-old commander responded by a ping on an EPIRB as the aircraft was flying over him'. The EPIRB or Emergency Position Indicating Radio Beacon is a device used to alert search and rescue services in the event of an emergency. Some EPIRBs also have built-in GPS that enable rescue services to accurately locate boats.

The Indian Navy aircraft, however, returned to Port Louis, Mauritius. Inclement weather - heavy rains have been reported in the area - means the officer can only be rescued by naval ships, the defence spokesperson said.

An Australian Navy frigate, HMAS Ballarat, too is on the way to reach Tomy.

The yachts of Tomy and Ireland's Gregor McGuckin dismasted and twice knocked down the yacht of second-placed Dutchman Mark Slats. Both McGuckin and Slats have reported that they are okay. Other contestants in the race were asked to make towards Tomy's position if possible, but the weather is reportedly extremely rough.The nearest yacht is McGuckin's Biscay 36 Hanley Energy Endurance, about 90 miles to the southwest of Tomy's, but she is dismasted.

The position of SV Thuriya at 4 pm coordinated universal time (UTC) which is 9.30 pm in India. The yellow mark on the map is the position of Gregor McGuckin's yacht, which was closest to officer Tomy.
Credit: www.goldengloberace.com

Race to save ‘far from help’ injured sailor