Stanislaus Lourduswamy hailed as a martyr by fellow Jesuits 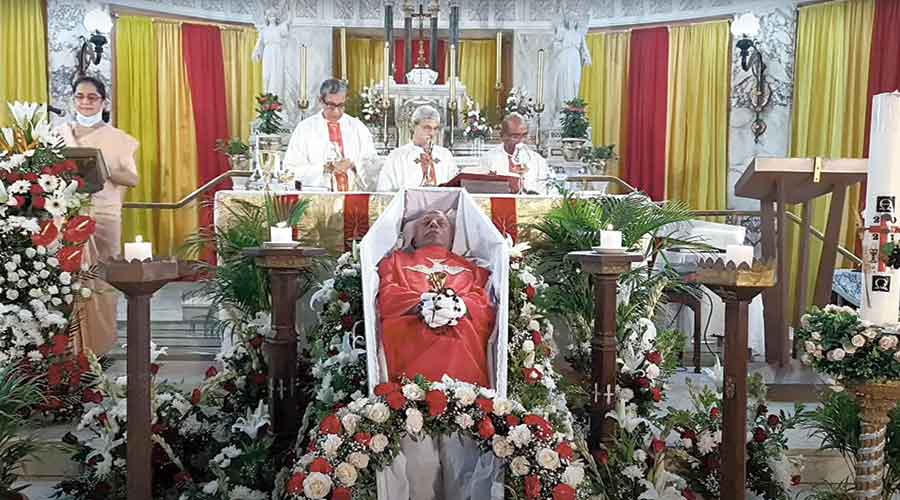 Clothed in the red vestment that symbolises martyrdom for Catholics, Stanislaus Lourduswamy was hailed as a martyr by fellow Jesuits at his funeral service in Mumbai on Tuesday.

Father Stan Swamy died in judicial custody on Monday, held captive in a case in which the priest was an accused in an alleged Maoist plot that has evoked incredulity among civil society.

Although a Jesuit who celebrated the funeral Mass clarified that they would not be seeking for Fr Stan to be formally recognised as a martyr by the Catholic Church, the symbolism of a Mass being offered for a “martyr” created in a democratic country is significant.

During the service that was livecast online, Jerome Cutinha, provincial of the Jamshedpur Jesuit Province, delivered an obituary for Fr Stan who was based in Ranchi until his arrest last October in the Elgaar Parishad case.

“May the martyrdom of Stan inspire and challenge us and the entire nation to recommit ourselves to take forward the legacy of Father Stan in the mission of justice and reconciliation. We offer to God the friends of Stan, the hundreds of Adivasi undertrials who languish in jails on false charges. We offer the co-accused of Stan, accused of fabricated charges and now incarcerated,” Cutinha said.

Frazer Mascarenhas, former principal of Mumbai’s St. Xavier’s College and parish priest of the St Peter’s Church in Bandra where the Mass was offered, told The Telegraph later: “He paid the price for doing his justice work. In that sense he is a martyr…. We don’t mean it in the religious context.”

The All India Catholic Union, the country’s main association of Catholics who are not priests or nuns, echoed the martyrdom reference, reflecting the widespread perception that the death was a result of harassment by investigators.

The Flagellation of Christ according to the Gospel of John was read out by Joseph Xavier, director of Bangalore’s Indian Social Institute. The episode in the Bible describes how Pontius Pilate is unable to find fault with Jesus when he is handed over to be crucified.

Among the verses read were: “Once more Pilate came out and said to the Jews gathered there, ‘Look, I am bringing him out to you to let you know that I find no basis for a charge against him.’

“…As soon as the chief priests and their officials saw him (Jesus wearing the crown of thorns), they shouted, ‘Crucify! Crucify!’

“But Pilate answered: ‘You take him and crucify him. As for me, I find no basis for a charge against him.’”

Fr Stan, a tribal rights defender, was among 16 people arrested in the Elgaar Parishad case — an investigation into alleged Maoist links to an Ambedkarite event on the eve of 2018 which was followed by caste clashes the next day that claimed one life.

The case expanded to a purge of “urban Naxals”— a term coined by a Right-wing commentator to brand academics, lawyers and rights defenders like Fr Stan who are accused of clandestinely working for the banned CPI (Maoist). The case was transferred from Maharashtra police to the National Investigation Agency (NIA) soon after the BJP lost power in the state.

In religious terms, the last time a death was termed as martyrdom by the Church in India was in 2011 when catholic nun Valsa John Malamel was hacked to death in Jharkhand.

She was involved in a predominantly Santhal tribal movement against coal mining in the Sahibganj district and was reportedly targeted for taking up the cause of a rape victim. However, the formal process to declare her a martyr by the Catholic Church has not begun.

In 2017, Pope Francis bestowed the “decree of martyrdom” — a path to sainthood where the process is shorter than other categories — on another nun, Rani Maria, who was killed for organising landless labourers near Indore in 1995. In May this year, nun María Agustina Rivas López, who was killed by Maoist rebels in Peru in 1990, received the decree.

Stanislaus D’Souza, president of the Jesuit Conference of South Asia, said via videoconference during the Mass: “He (Fr Stan) was hounded because of his staunch support to the struggle of the Adivasis and the Dalits for their basic human rights…. His death was hastened because of the rough treatment that was meted out to him in custody.”

Delivering the eulogy, Mascarenhas, the parish priest, said: “I like to remember him with the word he used for himself and for his friends. The word: ‘comrade’. He said ‘my comrades are important to me’.

“Now don’t think for a while that comrade means Maoist, violent type. Nothing to do with Stan. That is absolutely a ridiculous accusation. Stan was gentle and one who loved peace. So, there is no question of violence about him. But he considered all those working for humanity, especially the deprived sections of humanity, as his comrades.”

Mascarenhas added: “That’s the reason why he was effective and became a thorn in the side of the powerful… because he became successful in the constitutional method of getting rights for people.”

The All India Catholic Union said in a statement: “The course of the various stages of his bail application, the manner in which the investigating agencies and the prosecution insisted he was too dangerous to be released are ample evidence that the State wanted to make an example out of him, and the others arrested with him.…

“In life and in his martyrdom, Fr Stan Swamy has become a beacon for all who struggle for human rights, specially the rights of the tribals and other marginalised people, and a role model for young men and women across the nation.”

It added: “The All India Catholic Union reaffirms this demand for a judicial enquiry, and also demands the repeal of the UAPA and such draconian laws under which thousands of people, old and young, have been put in jail and denied rudimentary justice.”

Fr Stan’s lawyer Mihir Desai told this newspaper that no decision had been taken yet on how to pursue the demand for a judicial probe.

Fr Stan was cremated by the Jesuits in Mumbai after the Mass. His ashes will be taken to Ranchi where a memorial monument is planned. Transporting the body itself, said a Jesuit source, could face logistics hurdles.

In Delhi, several SFI activists, including Aishe Ghosh and Dipsita Dhar, were detained in a police station for protesting against what they called the “State-sponsored murder” of Fr Stan.

The protesting farmers in Ghazipur, too, paid homage to Fr Stan.

Opposition plea to President for action