Official estimates say 2,146 Sikhs were killed in Delhi and 586 in other parts of India for which 442 people have been sent to jail. 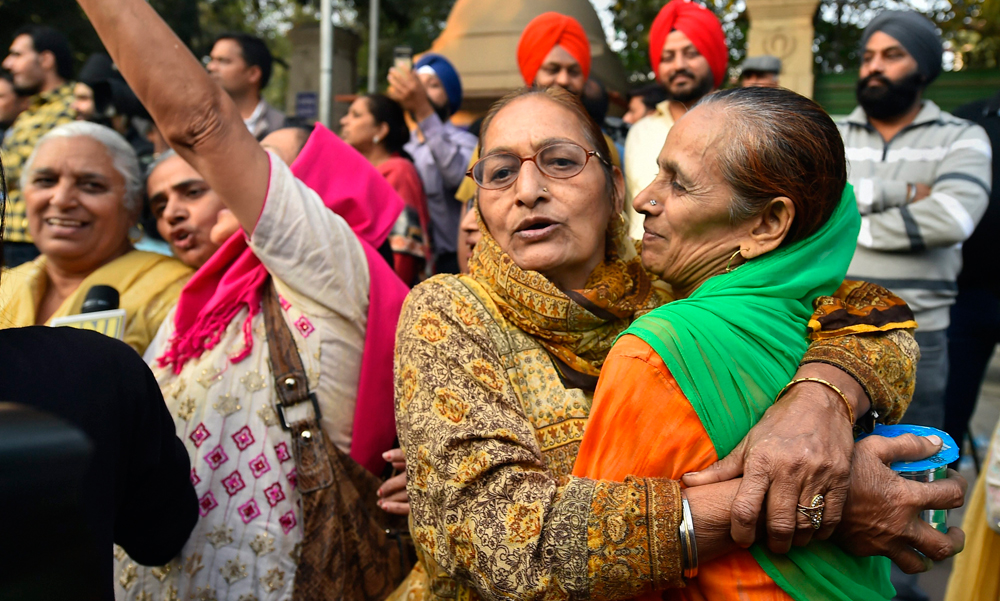 Family members of the victims of 1984 anti-Sikh riots celebrate outside the Patiala House Court in New Delhi on Tuesday, after the pronouncement of the first death punishment in the case.
PTI
Our Special Correspondent   |   New Delhi   |   Published 21.11.18, 07:02 AM

A Delhi court on Tuesday sentenced to death a man convicted of killing two Sikhs in south Delhi in the 1984 riots, in the first death penalty awarded for the pogrom that followed Indira Gandhi’s assassination.

According to official estimates, 2,146 Sikhs were killed in Delhi and 586 in other parts of India. Last week, additional sessions judge Ajay Pandey of the Patiala House Courts had found Naresh Sehrawat, 52, and Yashpal Singh guilty of murdering Hardev Singh, 24, and Avtar Singh, 26, in Mahipalpur near Palam airport on November 1, 1984.

Sehrawat was sentenced to death on Tuesday, and Singh to life imprisonment.

The probe was conducted by a special investigation team appointed by the home ministry in 2015 to re-examine the riot cases.

In this case, which had been closed by Delhi police in 1994, the SIT tracked down several witnesses including Hardev’s brother Sangat Singh in Jalandhar and relative Ratan Singh, now in Italy, who had identified the corpses in Safdarjung Hospital. The team found that a mob of 800 to 1,000 people led by the duo chased five Sikhs, including the deceased, stabbed them and threw them off a roof. Their homes and shops were also set ablaze. Three of the men survived.

The SIT is probing three other cases in which Congress leader Sajjan Kumar is accused.