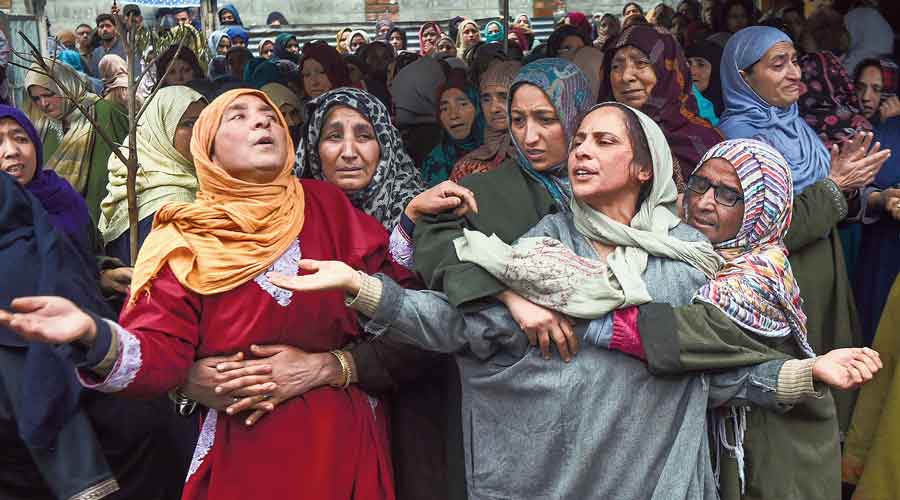 Women on Monday mourn the death of Rafiya who was injured in the grenade explosion in Srinagar on Sunday.
PTI Photo
Muzaffar Raina   |   Srinagar   |   Published 08.03.22, 01:16 AM

Fifty-year-old Nazir Ahmad Tinda returned home on Monday after burying his 19-year-old daughter Rafiya and the thought tormenting him was what would he do with her books.

The teenager died on Monday of injuries sustained during a grenade blast that hit a crowded market in Srinagar on Sunday. A 70-year-old man, Mohammad Aslam Makhdoomi, had died on the spot and over two dozen people were injured.

“How can I enter her room? How can I look at her books? What will I do with her books?” the middle-aged carpet weaver from Srinagar’s Chak Bagh Hazratbal sobbed uncontrollably as his relatives tried to comfort him.

“She was a brilliant girl, the apple of my eye. She was preparing hard for admission in a medical college to become a doctor,” Nazir told The Telegraph.

Rafiya’s mother and sister, who too were injured, have been discharged from hospital.

The family said Rafiya, the youngest of  four children, recently scored 467 out of 500 in her Class XII exams.

“She was preparing for this year’s NEET exams and was reluctant to join any college so that she can fully concentrate on realising her dream of becoming a doctor,” Nazir said.

Her siblings have studied up to Class X or less and Rafiya’s achievement is rare in the extended family where all members work hard for long hours on exquisite carpets to make a living.

“I had raised some money to pay for her coaching and she had recently joined a centre for crash course for NEET at Khanyar,” Nazir said.

“Soon after the blast, Rafiya asked her mother whether she was fine. But somebody noticed she was bleeding profusely from the back of her head. They were shifted to the hospital where Rafiya was operated on. But she did not survive,” a relative said.