Advertisement
Home / India / 20 dead, 14 of them due to drowning, in Maharashtra during immersion of Ganesh idols

20 dead, 14 of them due to drowning, in Maharashtra during immersion of Ganesh idols

In Thane, a 55-year-old woman was killed and four others injured after a tree collapsed on a Ganesh pandal in Kolbad area amid rains 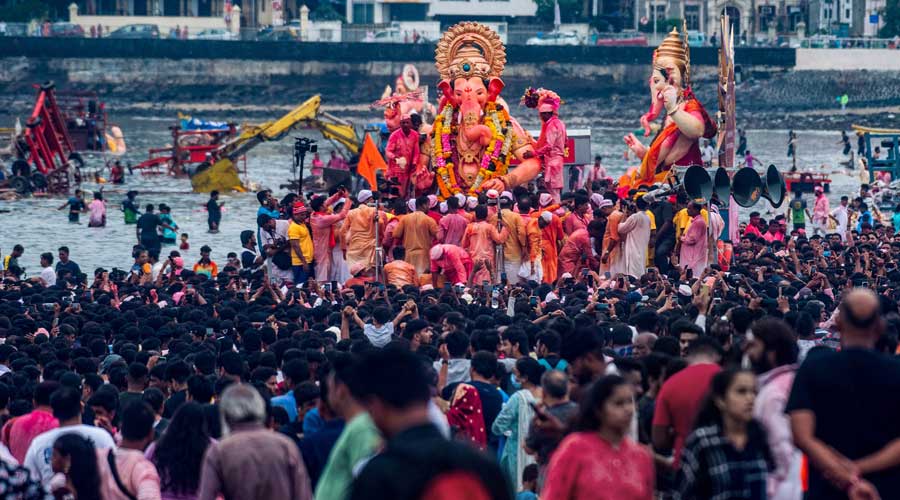 At least 20 persons died, 14 of them due to drowning, in different incidents that occurred during the immersion of Ganesh idols in parts of Maharashtra, police said on Saturday.

The 10-day Ganesh festival, which had started on August 31, ended on Friday.

In Wardha district, three persons drowned at Sawangi, while another one died in a similar manner at Devli, an official said.

Two persons drowned in a pond in Yavatmal district when during the immersion of an idol, he said.

In Ahmednagar district, two persons drowned in separate incidents at Supa and Belvandi, he said, adding that two others died in Jalgaon district of north Maharashtra - one each at Chalisgaon and Jamner.

One person each died at Ghodegaon and Yavat in Pune district, in Dhule district, Lonikand in Satara district and Solapur city, he said.

Four persons died in a road accident at Sakkardara area of Nagpur city during Ganesh immersion, he said.

In Thane, a 55-year-old woman was killed and four others injured after a tree collapsed on a Ganesh pandal in Kolbad area due to heavy rains. The incident occurred on Friday night, a civic official said.

"A huge tree fell on the pandal while the 'aarti' of Lord Ganesh idol was on as part ahead of its immersion. The woman, Rajashri Walavalkar, was seriously injured in the mishap. She and other injured were rushed to a hospital, where she was declared brought dead," the official said.

Meanwhile, at least 11 persons, including a nine-month-old child, were injured after suffering an electric shock at Panvel in Raigad district during a procession. The incident took place on Friday evening at Wadghar Koliwada after a cable of an electric generator snapped, an official said.

"At least 11 persons, who were part of the procession, came in contact with the cable and sustained injuries. The injured include four children," he said.

While some of them were rushed to a private hospital, others were taken to a state-run hospital in Panvel, he said, adding that all are responding well to the treatment.

Some incidents related to law and order situation were also reported in parts of the state during the immersion.

A scuffle broke out between the supporters of Maharashtra Chief Minister Eknath Shinde and Shiv Sena president Uddhav Thackeray at Tophkhana in Ahmednagar district, an official said.

In Jalgaon, a group of people hurled stones at the mayor's bungalow during the Ganesh immersion procession, he said, while a clash broke out between two groups at Mundhwa in Pune city. A brawl occurred at Shikrapur in Pune district over bursting firecrackers, while in Chandrapur, a fracas was reported between Ganesh mandal volunteers and police personnel, he added.

In Mumbai, the Ganesh festival and the immersion procession passed off peacefully and no untoward incident was reported, police said.

"#GaneshUtsav2022 in Mumbai conducted & celebrated peacefully,smoothly & enthusiastically. I thank all the Mumbaikars, Members of all the Ganesh Mandals & all the Lord Ganesha's devotees, who followed all instructions & cooperated with us, the MUMBAI POLICE!," the city police's Twitter handle said.

Like every year, this year too we got an opportunity to serve the devotees, the Mumbai police said.