Yoga anatomy, common mistakes and strategies to avoid them 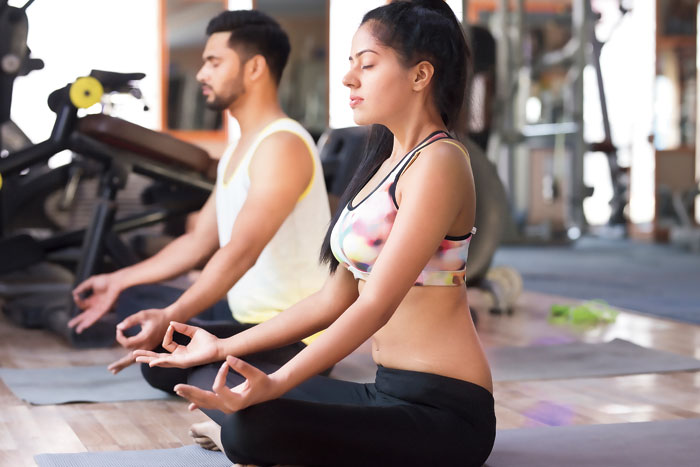 Yoga is commonly practised across the world. Millions of people across the globe have taken up this beautiful ancient Indian practice. In recent times, researchers have reported psychological and physiological benefits from a regular practice of yoga through robust studies. It is important to highlight that yoga is a vast subject, the physical aspect (asanas) is just one small part of yoga.

Yoga is a way of life and there are a lot of dimensions to it. However, it is the physical aspect of yoga that has become very popular today. There are numerous classes and retreats teaching yoga asanas across the globe. Even though yoga asanas are now studied in more depth through anatomical, physiological and biomechanical lens, often people try and fit a person into an asana rather than the other way around. This can negatively impact an individual’s practice. Therefore, the article will only discuss the anatomical variances in the skeleton system with regards to two common yoga asanas, common mistakes and strategies to avoid them.

Accept the variations and limitations of our body structures

Even though superficially the skeleton system appears to be similar in humans but there are subtle variations that can dictate how we function. For example, in some people, the angle, the length of the femur (thigh bone) and the angle of the acetabulum (hip socket: a concave structure of the pelvis where the femur is attached) can limit certain movements such as padmasana (lotus position). This is particularly the case with people with a greater degree of anteversion (neck of the femur leaning forward) of femur. Their range of motion can be significantly restricted due to compression (bone on bone) when they try to externally rotate the hips (rotate hips out: knees away from the body) in a flexed position (hips closer to the trunk as seen in padmasana). If the restriction is due to tension, rigidity around muscles, ligaments, and fascia (connective tissue) it can be changed with proper practice but if it is because of the structure mentioned earlier then no matter whatever practice is incorporated it will just lead to frustration and possibly an injury if the movement is repeatedly enforced.

Similarly, some people might also have significant differences between both sides of their hip structure (that is, excessive version of femur/hip socket on one side). This will make it almost impossible to perform a symmetrical trikonasana (triangle pose) on both sides. Teaching cues, such as “square your pelvis”, “reach for the same depth on both sides”, commonly used in most yoga classes, should be avoided if there are structural constraints between the sides.

Besides, significant differences between the length of the left and right leg, the height of the shoulder crease, and excessive scoliosis of the spine (structural deviation of the spinal curvature to either side) can all play a role in asymmetrical movements that cannot be corrected with practice. Therefore, it should be understood that the goal of an asana practice is not about obsessing about achieving unrealistic symmetry between sides and geometrically aligned postures, but rather to progress and modify movements based on structural limitations and competency. It is about bringing consciousness and intelligence to every part of the body with the breath as guruji B.K.S. Iyengar always emphasised. However, this is only possible if we accept the variations and limitations of our body structures and find smarter modifications to reach our goals.

Therefore, asana practice should be person-specific rather than following traditional norms of how it has always been done.

Yoga asana should be focused on moving well with the breath in mind. The quality of practice will determine progress and help avoid unwanted injuries.

Kaushik Talukdar is the founder and CEO of Athlete Institute (www.athlete.institute) and a PhD scholar (sports and exercise science). You can email him at kaushik@athlete.institute or follow him on Twitter @Coachkaushik 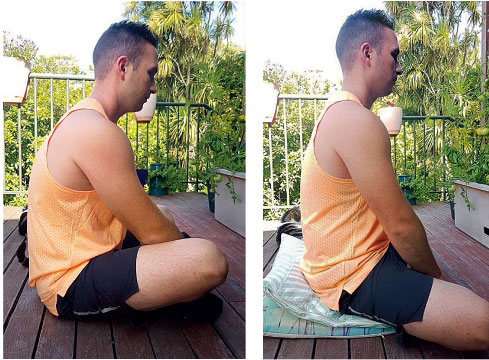 In the padmasana (lotus position), the knees tend to rise up (left), losing the neutral position of the spine; With a modification — raising the hips and keeping knees lower than hips — the spine can maintain a neutral position (right)
Kaushik Talukdar

If there is a structural issue described above, that is, bone on bone with no space to move while performing padmasana, vajrasana (kneeling thunderbolt pose) or any other position that people can sit comfortably should be used for pranayama. But if the limitation is due to tension around muscles, ligaments and fascia (hip flexors and rotators) not structural in padmasana, then a modification can be used, that is, placing the knees slightly below the hips by raising the hips on a cushion. Gradually, with the right mobility work, the height of the cushion can be lowered. The reason for this modification is because if the hips get pulled into excessive flexion (knees rise), then the spine loses its neutral position (tends to flex and buckle up). This can impact the practise of pranayama as the primary goal of pranayama is to be relaxed and focus on the breath. 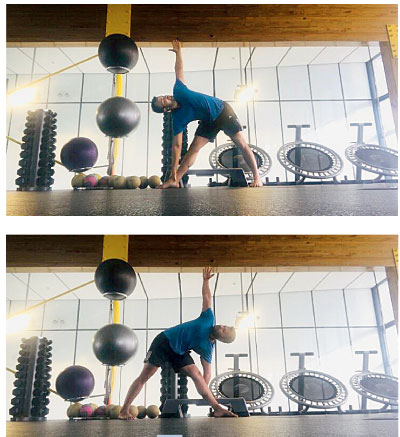 In trikonasana (triangle pose), a modification to total movement by raising the hand position to limit excessive spine movement may be needed
Kaushik Talukdar

This position requires an adequate range of motion and control in the frontal plane (side-to-side). If the hips are structurally limited, then most of the load will be taken up by the spine to attain the range of motion required in a trikonasana. Excessive spinal movement, particularly at the lumbar region (lower back), can be problematic as it is structurally not capable of excessive rotation, unlike the hips. Therefore, modifications such as limiting the range of motion to the point that allows adequate contribution from the hips are recommended. This could apply to both sides or in some cases on one side as seen in the photo.