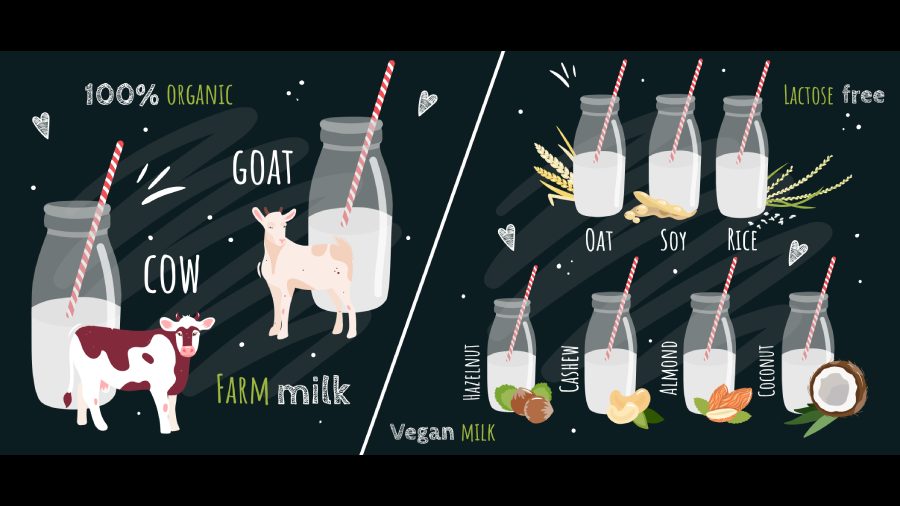 I am lactose intolerant, but still enjoy milk in cereal and coffee. What is the best alternative non-dairy milk to drink? This is a common health query and the simple answer to this is: a variety of alternative drinks can provide nutrition similar to cow’s milk, so other than personal preference, it comes down to how you define “best”.

Cow’s milk is naturally high in protein, calcium and a variety of other important vitamins and minerals. Through fortification, it also offers vitamins A and D.

If the goal is to enjoy a product as similar to cow’s milk as possible, then lactose-free cow’s milk or soy milk may be your best bets. “A diagnosis of lactose intolerance actually doesn’t mean you have to fully avoid cow’s milk dairy products,” said Alicia Romano, a registered dietitian at the Frances Stern Nutrition Center at Tufts Medical Center, US and a spokesperson for the Academy of Nutrition and Dietetics.

Lactose is the sugar that’s naturally present in milk and other dairy products in varying degrees; milk has the most, hard cheeses have the least, Romano said. People who are lactose intolerant don’t produce enough lactase, the enzyme that helps you digest lactose.

Lactose intolerance affects approximately 25 to 40 per cent of adults all over the world. Tens of millions of Americans are thought to be lactose intolerant, which can cause cramping, diarrhoea and bloating when they eat lactose-containing foods. Lactose intolerance is particularly common in African Americans, Ashkenazi Jews, Latinos and American Indians, affecting up to 80 per cent or more of some groups.

From  a nutritional perspective, Romano recommends lactose-free milk as the first alternative to consider because the nutritional profile is the exact same as regular milk, just with lactase enzyme added to it. But there is a wide variety of healthy, non-dairy, plant-based milk alternatives available as well.

“If you are looking for a milk alternative that is most similar in a side-by-side comparison, that ounce by ounce has the most similar nutritional value to cow’s milk, then unsweetened, fortified soy milk is your best bet,” Romano said. “It lines up with calcium, Vitamin D, other nutrients, calories — the profile is almost identical.”

Other good options can be various nut milks and oat milk.

Dr. Walter Willett, a professor of epidemiology and nutrition at the Harvard T.H. Chan School of Public Health, US. Coconut milk, like cow’s milk, is high in saturated fat, which raises cholesterol levels. Soy milk and the various nut milks without added sugar — such as almond, walnut, peanut, cashew, hazelnut or macadamia nut milk — as well as hemp and flax milks are higher in heart-healthy unsaturated fats and also tend to have fewer calories than cow’s milk. Oat milk, without added sugar, is high in fibre, and the calories are comparable to cow’s milk.

Soy milk is one of the non-dairy alternatives that matches cow’s milk’s eight grams of protein per cup. But protein deficiency is not a concern in the United States, Willett said, especially for adults. If, however, you are looking to get a significant amount of protein from milk, check the labels on different products, as amounts vary widely among the non-dairy alternatives to cow’s milk.

Both Romano and Willett also suggest checking labels to look for alternatives that are fortified with calcium and Vitamin D, which may help with bone health. “We definitely need Vitamin D,” Willett said, although we probably don’t need the high levels of calcium that many Americans think they need. “When we look at dairy directly, we don’t see that high dairy consumption reduces fracture rates in terms of the evidence we have,” he said.

They also advise watching out for lots of added sugar in flavoured milk alternatives. Ideally there would be no added sugar in the product, but generally aim for below 10 grams of sugar per serving.

One last consideration: the planet. “It’s important to look at everything through both a health lens as well as an environmental lens at this point in time,” Willett said. Dairy production is tied to high levels of greenhouse gas emissions and also requires a lot of water. “So for the environmental footprint, alternative milks are actually desirable.”