Let us, at times, accept the adversities with as much courage as we can muster 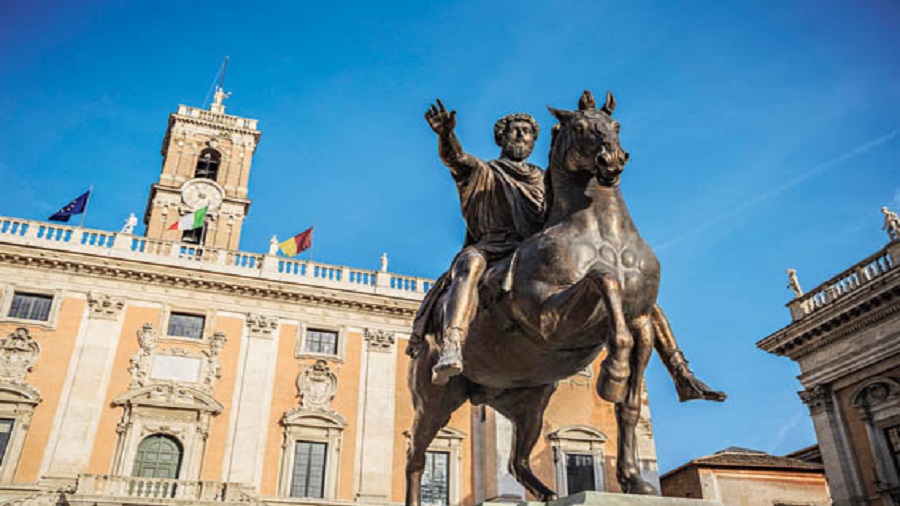 A file picture of an equestrian statue of Marcus Aurelius in Rome, the man who taught people to be calm and brave in the face of overwhelming anxiety and pain
File picture
J.R. Ram   |   Published 10.10.20, 05:06 PM

It is what it is, was how Rashid responded to my attempt to empathise with his current predicaments. The magnitude of adversities which the 21-year-old was facing was despairing. I had known Rashid from when he was 14 years old. He was brought, or rather forced to come and see me, after he planned to kill himself. He had assumed he would not be promoted to a new class. So to avoid the ignominy, he made a list of sleeping pills after searching on the Internet and took the list to his local pharmacy. The shop owner smelled a rat because some of the names on the list were trade names of sleeping pills available in the US only. The shopkeeper cleverly said it would take a bit of time to assemble those medicines and he would home deliver the same in an hour. He used the time to alert Rashid’s elder brother and the angry 14-year-old was brought to me for consultation.

It was towards the end of August this year when I met Rashid after a while. He had come back from Australia where he was studying because of the pandemic. His father and his paternal grandmother, who were the anchors in his life, had died within a month of his coming back home due to Covid. The family business was shut down, again a consequence of the pandemic. His mother, who had multiple health problems, had become severely depressed and attempted to kill herself about a week before our meeting. Rashid said that the family business was virtually bankrupt and it was unlikely Rashid would be able to resume his studies in Australia because of the financial crunch.

I tried to say a few words of comfort while he was describing his predicament and it is then he stoically summed up his state of mind: “It is what it is,” he said. It was bereft of any overt emotion or self-pity, as if he was observing his life with a remarkable degree of analytical detachment and describing someone else’s journey in our current chaotic planet.

The bubble of stability was punctured by the pin prick of nature — the pandemic.

Among many other things, the pandemic has highlighted the need for science in combating what ails our world like never before.

Paradoxically, it has brought philosophy also to the fore. Life had come to a complete halt for most of us. In this pause mode, many of us got a chance to reflect on how we should think about life’s challenges and how we should lead our lives. We have started to review the philosophy of our lives

My conversation with Rashid, or rather his one sentence which kept on playing on my mind on a loop, reminded me of stoicism. In this current upheaval, I feel we would do well if we acquainted ourselves more about this ancient Greek way of thinking, which still holds a lot of relevance and maybe even more in these times.

Everywhere you look there is something to feel sad or deeply perturbed about. How we manage our emotions, maintain equanimity and continue on this uncertain journey of life depends on how well we choose what kind of belief system we can hold on to. For me, being a stoic holds great value. The central tenets of stoicism have found expression in other religions like Buddhism and Christianity. It has found its way in psychotherapeutic approaches also. Stoicism was founded by Zeno in the third century BC. It was famously spread by Epictetus, Marcus Aurelius and Seneca.

The central precept of stoicism is amor fati. Epictetus said: “Do not seek for things to happen the way you want them to; rather, wish that what happens, happen the way it happens: then you will be happy.” A lot of our unhappiness comes from our rage and despair about how things are in the world. Rage and anger are essential emotions for survival and change. However, often, in times such as these, we do have to accept our fate. We cannot control the external world, but we can control our perception of it. If we look around us now, there are many reasons for most of us to be sad or deeply perturbed about. Stoicism can teach us to think differently about it.

The Stoics also call on us to become cosmopolitans. Do not say you’re an “Athenian” or a “Corinthian”, but “a citizen of the world”, Epictetus advises. Can there be a more prophetic advise than this, in our hugely polarised world?

Awakened from a comfortable slumber

One of the other key tenets of stoicism is to remind us about the inevitability of death or memento mori. Modern life has somehow cocooned us into not thinking about death unless we come face to face with it. Paraphrasing Benjamin Franklin, we seem to have forgotten the two certainties of life — death and taxes. Since antiquity, humans were intimately close to death. Whether in daily hunting gathering or the constant wars and epidemics, the external world was a constant reminder of our inevitable demise.

One of the biggest differences of modernity versus antiquity is how disconnected we are from this existential truth. Religions have been all but extinguished and death has been abstracted away. How can contemplating about death improve our lives? If we are more aware of our mortality, we will take more care in our actions. Perhaps we will be kinder, less hurtful, conserve our energy to do things which are more meaningful and less dishonest.

Recently a friend sent me a message about a “bespoke bubble holiday” his company has created. The message was followed by news of a death of a close friend. It reminded me that we are all very busy constructing “bubbles” around our lives to shield us from the truth that we will die. This pandemic has woken us from our comfortable slumber. It is a harsh reminder of death. It has made us more aware to count our blessings while we are living. This moment is all we have.

I had written in one of my earlier columns that our relentless effort to feel happy, or to achieve and experience certain “meaningful” life goals and activities is perhaps making us unhappy and miserable. It is our constant quest to eliminate or to ignore the negative — insecurity, failure, sadness and most importantly boredom — causes us to feel anxious or unhappy in the first place. The stoics propose the polar opposite. Premeditatio malorum is another stoic technique that Marcus Aurelius and many others practised. The stoics prepared for the worst rather than hoping for the best.

Life is a confusing mixture of sadness and joy, of success and failures, of occasional soaring in our achievements and occasionally barely managing to hold it all together.

Premeditatio malorum appears to be paradoxical but there is a lot of merit in expecting the worst. It is different from cynicism. If we are ready for our plans to go awry, then when it does, we can weather the storm.

So often in life we have to tell ourselves: “It is what it is.” We cannot change what is happening to us or around us. Let us, at times, accept the adversities with as much courage as we can muster. Nature and destiny occasionally dictates that we think like Rashid in times of adversity.