Exercising before and during pregnancy is safe and beneficial

Exercise and pregnancy may not be easy but it can do wonders for your well-being as well as give you the energy that is required to care for your newborn
Picture: iStock
Ranadeep Moitra   |     |   Published 15.06.19, 01:35 PM

Navdha Taparia is a 31-year-old mother of a two-and-a-half-year-old baby. Six years ago, she was diagnosed with hypothyroidism. She already had a pre-existent condition of PCOS and fibromyalgia and was given to understand that she would find it difficult to conceive again because of the complications and may have to resort to IVF. “Fortunately, I made the right choice at the right time,” says Navda.

She joined a corrective exercise centre and worked on strength, mobility, core stability and cardiovascular endurance. Her fitness practitioner helped improve the quality of her diet, encouraged her to change her sleep pattern and align her wake/sleep patterns to natural circadian rhythms. Simply put, get up early at the first light of day and retire by 10.30pm. Navda conceived naturally and had a very healthy pregnancy and baby. Because of all the hard work that she had put in during her pregnancy, her post-pregnancy recovery was smooth and rapid. In fact, only four months after her delivery, she was playing rugby for CC&FC. “I was playing forward and part of the scrum, one of the strongest players in the team,” she says.

Here’s another case. Manjari Kedia is 37 years old and she had her first child in 2012 while the second one arrived in 2016. Manjari was diagnosed with ankylosing spondylitis 15 years ago. It’s an autoimmune disease that causes degenerative and irreversible damage to the spine and hips and sometimes other organs, including eyes, liver and kidneys. Many women with A.S. find it difficult to conceive.

Manjari fought the disease with guts and good sense. The doctor had to put her off the NSAIDs (anti-inflammatory pills to relieve pain and stiffness) during her pregnancy. She had to cope with tremendous back and hip pain throughout her pregnancy. To counter the inflammation, she went off gluten and dairy and introduced more raw vegetables and plant protein in her diet. And she continued to exercise throughout her first seven months with priority to mobility and core stability movements. She sailed through both her pregnancies although “it wasn’t a lark”. After her second delivery, she developed a unique condition known as diastasis recti (common in women who are over 35 or deliver a high-birth-weight baby). She manages the condition in the gym with sound core conditioning training under a corrective exercise coach.

So, the question is, how to tackle prenatal and postnatal situations? I spoke to a few experts. 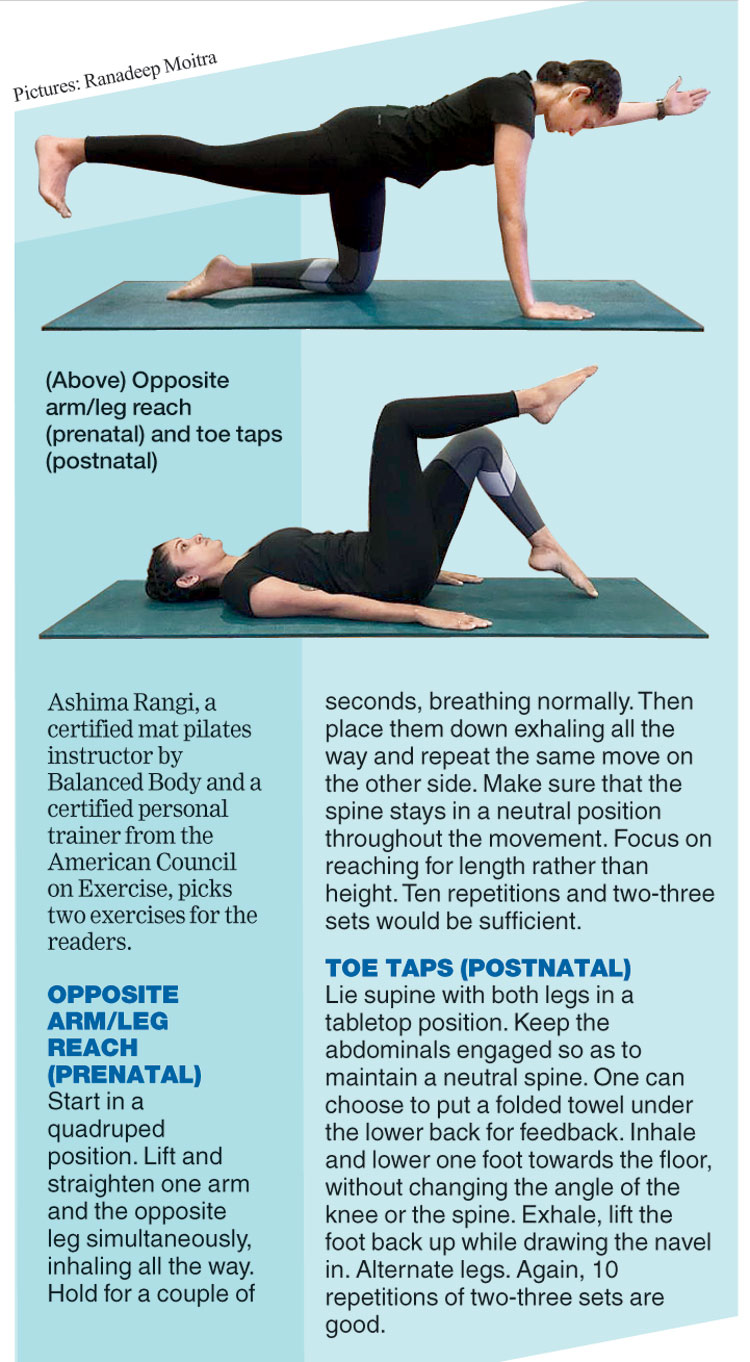 Vineet Goel, a CHEK-certified holistic lifestyle and exercise coach and a prenatal and postnatal specialist through exercise and nutrition, says, “More often than not, I have seen women — post pregnancy — facing myriad issues, some of which go unnoticed, especially with

C-section. Visceroptosis (it’s a prolapse or a sinking of the abdominal viscera — internal organs — below their natural position. Ptosis being the defining term, any or all of the organs may be displaced downward). To simplify, belly hanging downwards like a pouch and lower back has an excessive arch.

One of the major reasons for majority of back pain in women is poor strength/tone in core and hip muscles. Find a way to incorporate your baby into the exercise, if you cannot find time to exercise alone. Ten to 15 minutes, five to seven days a week is all you need in the beginning as suggested by Holli Spicer-Clepper (CHEK practitioner).

Minu Chand, a certified personal trainer from Progressive Fitness, USA, and a “postpartum health and happiness through exercise and nutrition” practitioner, says, “Not so long ago, women were told to take it easy during pregnancy to avoid harming themselves and the foetus. Fortunately, that advice has evolved. It’s important to move during pregnancy and move well! During pregnancy, women tend to get rounded in the upper back, their pelvis falls forward (anterior tilt) and the knees come together (hyperextension). They face problems like incontinence, lower-back pain, headaches and abdominal cramping.”

She suggests “weight training, which builds muscular endurance, strengthens the abdominal and back muscles and builds integrity in the joint capsules which tend to get lax during this period. It also helps in post-pregnancy recovery.”

Exercise and pregnancy may not be easy but it can do wonders for your well-being as well as give you the energy that is required to care for your newborn. Maintaining good posture during pregnancy will be essential to allowing your body to adapt well to your pregnancy and reduce the amount of pain that is brought on by muscle imbalance. Addressing muscle imbalance is key before planning your pregnancy. During pregnancy, the hormone relaxin is present 10 times more than its normal concentration to relax the joints in the pelvis so that the baby is able to grow. Unfortunately, relaxin also causes unnatural range of movement in other joints causing inflammation and pain. Therefore, creating strength and stability in the body is very important. Pre-pregnancy checklist should include strengthening neck extensors, wrist, glutes to support lower back and a strong transversus abdominis (the deepest abdominal core muscle that runs transversely across our mid-section).