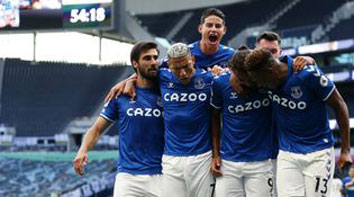 Everton justified the pre-season optimism as Dominic Calvert-Lewin’s header earned them an impressive 1-0 win at Tottenham Hotspur in their Premier League opener on Sunday — the Merseyside club’s first win over Spurs since 2012.

They both made outstanding debuts, as did fellow new Brazilian midfielder Allan, but it was Sheffield-born Calvert-Lewin who gave Everton a thoroughly deserved victory against an unimaginative Tottenham side.

After an even first half in which Richarlison wasted a great chance for Everton and keeper Jordan Pickford denied Tottenham’s debutant Matt Doherty, Everton bossed the second period.

And while the season is still in its infancy and the transfer window remains open, Sunday’s evidence shows Everton’s prospects of challenging for a European place look brighter than Jose Mourinho’s Tottenham.

It was the first time Mourinho had lost the opening match of a Premier League season.

“You look at the quality that’s come in, it’s an instant uplift,” Calvert-Lewin said. “As a centre forward you look at the creativity — they’ve played at the top level. There should be chances this season.”

Rodriguez, signed from Real Madrid this week, offered a performance that augurs well for the season.

Jamie Vardy converted two penalties to help Leicester City get off to a winning start with a 3-0 victory against promoted West Bromwich Albion.

The visitors took the lead in the 56th minute through debutant Timothy Castagne — a summer signing from Italian side Atalanta — when the full back headed home a Praet cross.

Vardy was fouled by Kyle Bartley in the penalty area 17 minutes from time, and the striker stroked home the spot-kick to score for the fifth successive trip to West Brom as a Leicester player.

Leicester were able to give substitute James Maddison his first minutes since March after undergoing hip surgery, before Vardy made the win more comprehensive six minutes from time with another penalty. “It’s a massive win for us,” Vardy said after the match. Belgian Castagne was pleased to score his first goal in English football.“It was a dream debut,” Castagne said.