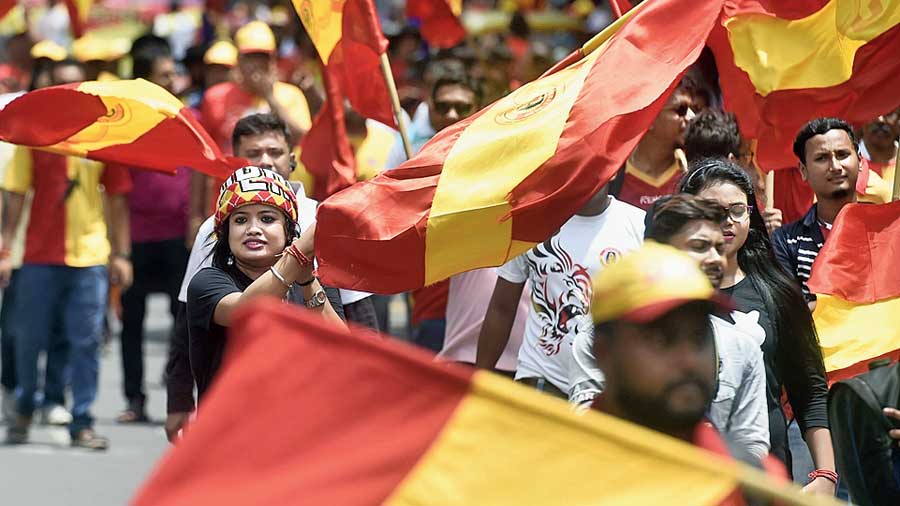 East Bengal’s wait for a new investor ended on Wednesday, paving the way for the century-old club’s entry into the Indian Super League (ISL), possibly from this season itself, and setting the stage for Derby clashes with Mohun Bagan in Indian football’s top tier.

Chief minister Mamata Banerjee announced that East Bengal will enter into a joint venture with the city-based cement company, Shree Cement, which, she said, will allow the club to “play in the ISL”.

The company, one of the largest cement manufacturers in the country, is owned by Hari Mohan Bangur.

Mamata said that with Shree Cement coming on board, East Bengal are now “self-sufficient to complete the formalities” to play in the top flight league.

“No one is ready to spend in this pandemic situation. But Shree Cement has come forward and finalised the negotiation. It gives a different level of joy and satisfaction,” the chief minister said following a meeting with club officials and Shree Cement at Nabanna.

“They (East Bengal) are now self-sufficient to complete the formalities (to play in the ISL). It’s like winning from the jaws of defeat. I hope there will be no further obstacles,” she added.

Mamata said she has requested the All India Football Federation (AIFF) to do the needful so that East Bengal can play in the ISL this season.

“All problems are now solved. Today all the fans will be happy that East Bengal will play in the ISL. Of course, they have to complete the formalities. I have requested everyone, including the AIFF.”

Reliance chief executive Tarun Jhunjunwala, who was present during the media briefing, too offered hope that East Bengal could turn out in the ISL from the seventh edition itself.

“We will try to ensure that East Bengal play in the ISL from this year. Some formalities are to be completed. With both East Bengal and Mohun Bagan (they joined hands with ISL franchise ATK and formed ATK Mohun Bagan FC) featuring in ISL, this will be a new beginning for Indian football,” Jhunjunwala said.

“We are proud to be associated with East Bengal,” said a representative from the investors.

“This association with the cement company will be strong,” reciprocated club secretary Kalyan Majumdar.

Sources said the new investors would have a greater share in the new company than the club.

“Most likely, two representatives from the club would find a place on the board of directors,” the source informed. It’s not just football, the new investors would take care of the other disciplines, like cricket, as well.

In the ATK Bagan deal, the former has a 80 per cent stake. On the day the deal was announced, an East Bengal official had said: “We would not go for anything less than 50:50.”

Not very long ago, FSDL, after a meeting with the franchises, had decided to stick to a 10-team league for this season, dealing a blow to East Bengal’s hopes.

“Chief minister (Mamata Banerjee), who took personal interest in the negotiations, had requested FSDL chairperson Nita Ambani to consider East Bengal’s case. Only after that did it become possible for us to play in the ISL. Even a fortnight ago chances were bleak,” the source informed.

Indian cricket board president Sourav Ganguly, who is also one of the directors of ATK Mohun Bagan, played his role. “He was kind enough to pitch in for us,” the source added. In the media release, East Bengal thanked both Mamata and Sourav for their help.

This year’s ISL will be played in three venues in Goa.