Advertisement
Home / Entertainment / With Season 5 of The Crown dropping today, TT looks back

With Season 5 of The Crown dropping today, TT looks back 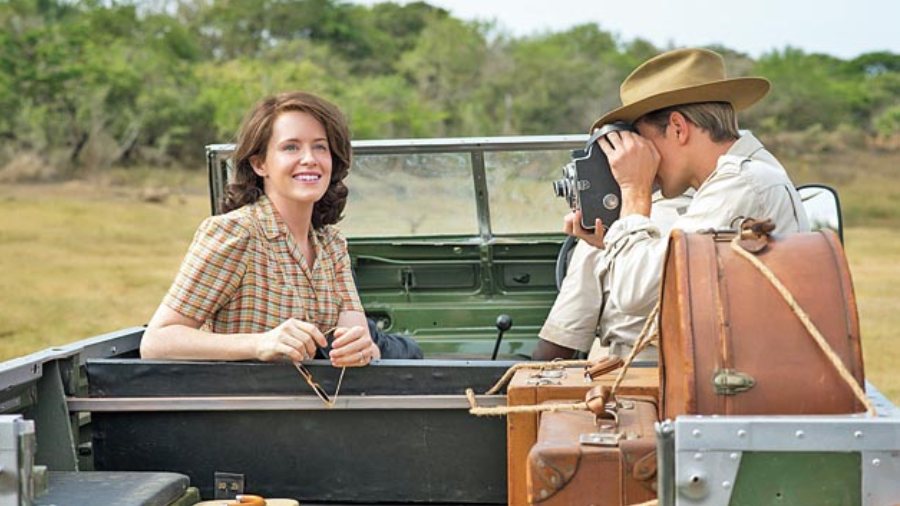 Hyde Park Corner (Season 1, Episode 2): As The King’s health worsens, we know exactly what awaits. Hyde Park Corner leaves us with an endearing portrait of King George (Jared Harris) who passes away midway through the episode. There is a beautiful scene that precedes the doom, where he sings with Margaret (Vanessa Kirby) at the piano, that truly shows how much his family meant to him. With the King’s death, the news spreads in the family first, and the media. This is played out in contrast to Elizabeth (Claire Foy), who is in Nairobi with husband Philip (Matt Smith), who are miles away from the truth. When the news does hit her, it is conveyed in a wordless exchange, through just a look.

But perhaps the most striking moment of this episode arrives at the end, when Elizabeth returns to Sandringham House, where she is met with a curtsy by her own grandmother, Queen Mary (Dame Aileen Atkins). She is bewildered and stunned, coming to terms with the huge position she has stepped into. The nation thus stands: “God save the Queen.”

Act of God (Season 1, Episode 4): One of those underrated episodes that deserves more attention. ‘Act of God’ deals with the real-life event of the Great Smog in London that brought the city to a standstill for several days. Thousands of deaths were reported and hospitals went into chaos. The young secretary of Churchill (John Lithgow), Venetia Scott (Kate Philips) enters his office even during the difficult circumstances, and when she is knocked over by a bus the next day, it becomes the wake-up call for Churchill to take action.

Scott is one of the very few ‘invented’ characters in The Crown and adds a great deal of warmth among the icy bureaucrats that surround her. There is also a deeply poignant conversation between Elizabeth and her grandmother, where Queen Mary promptly shrugs off any iota of doubt shown by Elizabeth and reminds her that the monarchy is “God’s sacred mission to grace and dignify the earth...” Does Elizabeth understand this devastating truth that she herself stands as an instrument of God? Her impartiality will count as her biggest strength.

Pride and Joy (Season 1, Episode 8): “Elizabeth is my pride and Margaret is my joy,” King George had said. Did the King have a favourite among his daughters? Although we can’t wait to see what Leslie Manville brings to Princess Margaret after Helena Bonham Carter, can we collectively agree that Vanessa Kirby was in a different league as the younger sister in the first two seasons? Part of it is also because of the writing, which had more scope for Princess Margaret in the first two seasons. Nevertheless, ‘Pride and Joy’ gives room for the intense relationship shared between the two sisters. As Elizabeth sets off for an exhausting tour of the Commonwealth, it gives chance for Margaret to dazzle, and so she does, putting forth a ravishing display of individuality. How far can this be allowed? Elizabeth is cold when she confronts Margaret after her return, reprimanding her behaviour with quiet precision. No one is above duty. Not even family.

Vergangenheit (Season 2, Episode 6): What The Crown does so well is place multiple plotlines and connect them in ways that reveal facts that we rarely get to know. This is most evident in this episode, where Elizabeth’s (Olivia Colman) values on faith are juxtaposed with her exiled uncle King Edward’s (Alex Jennings) attempts to return to the country and find a job. The episode sheds light on American evangelist Reverend Billy Graham (Paul Sparks) and how his sermons were the talk of the town. Meanwhile Prime Minister MacMillan brings the issue of the controversial Marburg Files to Elizabeth, who gets the whole truth of the matter (the association of Edward and Wallis with Hitler) with some help from Tommy Lascelles (Pip Torrens). She shuts down any further negotiation with her uncle, as she remarks, “There’s no possibility of me forgiving you. The question is, how on earth can you forgive yourself?” What this episode depicts so movingly is the isolation of Elizabeth as her position as head of the Church of England. During this time, it is her unwavering faith that keeps her steady.

Dear Mrs Kennedy (Season 2, Episode 8): Perhaps one of the most dramatic episodes in the history of The Crown, where Elizabeth meets Jackie Kennedy (Jodi Balfour), the First Lady of the US, at Buckingham Palace. The centerpiece of this episode is the conversation that they share as they tour the rooms. Elizabeth is a little shy and envious of Jackie, and conducts herself accordingly. Yet, as improbable as it seems, Jackie reveals how introverted and lonely she feels in the position, and that draws in the thread of connection between the two women. The Crown strikingly draws in the gaps to show how Elizabeth reacts to the insults Jackie had for her later, and claims her way for a comeback. Her trip to Ghana garners rave reviews. She admits that it was Jackie who ignited the confidence in her. Foy’s performance, in particular, is pitch-perfect in adding layers to Elizabeth that we cannot really ascertain. She feels but never admits.

Aberfan (Season 3, Episode 3): Certainly the most devastating episode so far that does a brilliant job in shedding light on the 1966 mining disaster that killed 144 people, of which 116 were children. Far away from the goings-on of the palace, ‘Aberfan’ moves to a small mining village in South Wales. The richly detailed episode also shows the Queen’s apparent lack of compassion where her delayed response to the people of Aberfan remains one of her “biggest regrets” as a sovereign. (It’s also ironic how Colman, who is such an easy crier on screen, has to play a person who simply cannot bring herself to cry). In the end, she does pay a visit, albeit a political ploy to escape bad press. When she finally drops a single tear listening to the children singing, Jesus, Lover of my Soul, it is a moment of unraveling.

Bubbikins (Season 3, Episode 4):  Finally an episode that throws light on Philip’s (Tobias Menzies) background. ‘Bubbikins’ does so with compelling storytelling. The Duke of Edinburgh takes it in his stride to mend public opinion of the Royal Family by filming a documentary on their lifestyle. What he doesn’t anticipate is the harsh criticism because of it, with the privileged and elite lifestyle exposing the Royal Family without warning. It is Anne (Erin Doherty) who comes to the rescue and places Philip’s mother Alice (Jane Lapotaire) in front of the interviewer. There she reveals her tumultuous past, discarded at a mental asylum and treated as a patient of schizophrenia for years. Her story smoothens the outcry, and Philip finally pays a visit to her. “Choose a faith,” she says, calling her son ‘Bubbikins’, “It’s everything.” The documentary never sees the light of day again.

Tywysog Cymru (Season 3, Episode 6): The preparation for the 1969 investiture ceremony of Charles (Josh O’Connor) provides the foundation of this deeply empathetic episode. Charles, with all his interests in a newly acquired role in theatre, is uprooted from Cambridge and planted in Wales. Sensitive and observant, he has to live up to the title of the Prince of Wales by giving the full speech in a language he doesn’t know anything about, surrounded by men who are anti-monarchists. Slowly he absorbs the history, language and the culture. O’Connor is so outstanding as Charles that you cannot help but sympathise with a man who has to sublimate his interests for duty. He sees the connection with the Wales public, both are abandoned and carelessly ignored. His speech reflects that solidarity. But as he will know as soon as he goes back to the palace, no one wants to hear his voice. It’s an icy cold, harsh blow of a scene that is heartbreaking in more ways than one.

The Balmoral Test (Season 4, Episode 2): The last season had so much going on simultaneously, with the early years of Princess Diana (Emma Corrin) and the role of prime minister Margaret Thatcher (Gilian Anderson), it is fascinating to see how The Crown skillfully clubs these two different personalities together. Each new member of the Royal Family is invited to the Balmoral Castle, where there are “hidden tests” to see the suitability of that outsider into the royal family. Thatcher presents herself as a startling intruder into the daily whims of the Royal Family. She cannot imagine wasting her time in such a place when there are more important matters back in office. She returns in the same speed as the arrival of Diana in the second half of the episode. Her quick wit, beauty and modesty charm each one in the hood, and it makes her Balmoral debut a grand success. Tantalisingly fun, ‘The Balmoral Test’ is one of the few light-footed episodes that allows a peek into the possible routine of the Royal Family away from public scrutiny.

48:1 (Season 4, Episode 9): The cold war between Elizabeth and Thatcher makes for a dramatic episode where we see both women at odds with each other over a constitutional development. Thatcher will not entertain any indication of sanctions over the bills to abolish the Apartheid system. As the Queen quickly realises, it’s the job of a writer to cleverly ascertain the concessions to be made. This is a swift episode, superbly edited and directed, plus a bonus cameo by Claire Foy in the beginning acts as a cherry on the cake. 48:1 is also fascinating in the way it presents the political implications in diplomatic terms. Thatcher blasts every word from ‘measures’ to ‘protocols’ to ‘sanctions’, at last agreeing to ‘signals’, as suggested by the writer Michael Shea. But there is a price to be paid once the heat shakes the foundation. There is no one above the sanctity of The Crown. The Crown must always win.