On filmmaker Vidhu Vinod Chopra’s birthday, we rewind to the radical irreverence of his first two films — both thrillers 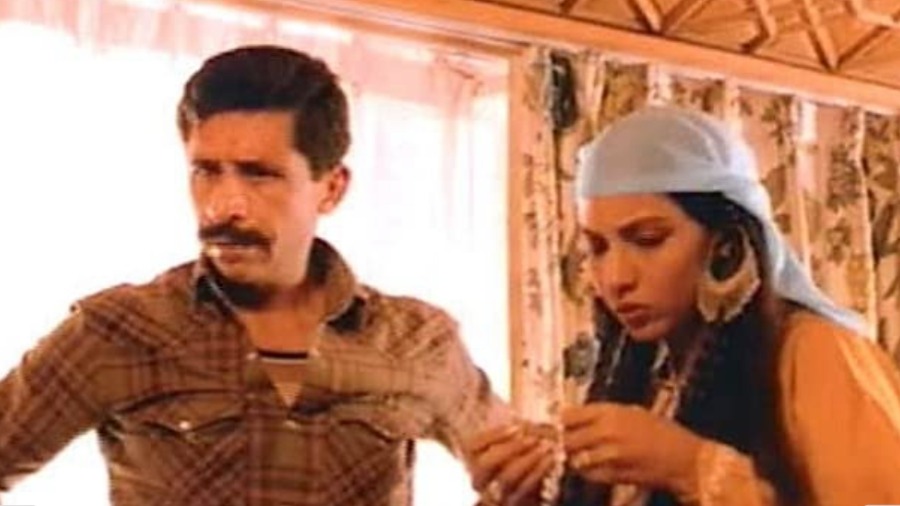 ‘I’ve begun comparing films to a wonderful funeral, rather than, as people normally do, childbirth.… It’s really not in my hands if the film goes to heaven or to hell. I’m afraid I’m becoming more and more Buddhist as I grow older.’ – Vidhu Vinod Chopra

It is one of the most audacious sequences in a Hindi film ever. The royal guard, Eklavya (Amitabh Bachchan), is face-to-face with Prince Udaywardhan Rana (Jimmy Sheirgill), who he suspects has killed the king. As the confrontation gathers momentum – a sequence from Parinda playing on the giant screen in the background – Eklavya switches off the lights in the room. For the next 77 seconds – the sequence begins at 1:15:48 and ends at 1:17:05 – it is pitch-black. What you have is a black screen with a soundtrack peppered with gunshots. In the theatre in which I watched the film, the crowd became restive, whistling and shouting obscenities at the projectionist, assuming that there had been a power failure.

I have often wondered if the director would have foreseen this reaction in the audience. A perfectly visualised and innovatively executed sequence of awe-inspiring courage and imagination being misread as a case of projection glitch. But knowing him, I have a nagging doubt that he would have, and true to his self, didn’t give a damn. After all, there are few filmmakers in Bollywood as iconoclastic as Vidhu Vinod Chopra. As Shobhaa De wrote about the scene: “Either the director has real balls or he is nuts. Or both.”

This radical irreverence has always been part of Vidhu’s personality. Here’s a man who abruptly ended his first film, Murder at Monkey Hill (1976), saying that he had run out of film stock, thus highlighting the inadequate resources available to student filmmakers. It is another matter that this ‘incomplete’ crime thriller with a delicious touch of wry humour went on to win the National Award for Best Experimental Film at the 24th National Film Awards in 1977.

This is a man who, when receiving the award from President Neelam Sanjeeva Reddy, refused to get off the stage unless he was paid the prize money of Rs 4,000 in cash – he didn’t trust the government with the bond he had been given, you see – with a flustered information and broadcasting minister, L.K. Advani, trying to reason with him.

It is this same desire to swim against the tide that resulted in the first two feature films he directed. Before he broke new cinematic ground with Parinda, before he brought melody back to Hindi cinema with 1942: A Love Story, before he became one of the country’s most successful film producers with blockbusters like the Munnabhai films, 3 Idiots and PK, introducing a host of new talent, Vidhu Vinod Chopra made what are arguably two of the finest thrillers in Hindi cinema: Sazaye Maut (1981) and Khamosh (1985). Almost 40 years later, the films might seem technically wonky to a generation weaned on Marvel and RRR. They were, after all, made on budgets of Rs 300,000 and Rs 800,000 respectively. But when seen against the backdrop of films that were being made in Bombay at the time, these experiments were nothing short of revolutionary.

Sazaye Maut: It is minimalist and it is effective

In the year Sazaye Maut released, the films that ruled the box office were clangers like Kranti, Lawaris and Rocky, romantic films with chartbusting music (Love Story and Ek Duuje Ke Liye), multi-starrer blockbusters (Naseeb) and B-graders like Wardat and Meri Awaaz Suno. The highest-grossing films of 1985, when Khamosh was made, included Ram Teri Ganga Maili and Mard – both films providing glimpses of directors who had lost their way and were pandering to the lowest common denominator. While melodramatic tripe like Pyar Jhukta Nahin and B-graders (Saamri, Adventures of Tarzan) ruled the roost, Jeetendra and Rajesh Khanna were going strong with the banality of their offerings from the south.

What makes Sazaye Maut and Khamosh important is that here was a filmmaker wanting to combine the aesthetics of arthouse cinema with the commercial idiom. He was out to provide solid mainstream fare without in any way compromising on the aesthetics of his film-school grounding. This is reflected as much in his choice of genre – the thriller (he recounts his father’s narration of Chase a Crooked Shadow as one of the defining moments of his life that drove him to cinema, as also his fondness for the pulp fiction of Ibn-e-Safi) – as in the actors he chose to cast in these two films, almost all of them stalwarts of parallel cinema.

Sazaye Maut expands on his student film Murder at Monkey Hill. The latter starred the filmmaker himself who plays Akhtar, a professional hitman hired to murder a girl. Complications arise when he falls in love with the girl. Unable to bring himself to kill her, he pays a woodcutter (Dilip Dhawan) to do the job. As the woodcutter chases the girl with an axe, Vidhu abruptly ends the film without revealing if the hit has been made. For Sazaye Maut, he cast Naseeruddin Shah in the role that he had essayed in Monkey Hill.

With a spareness that is rare for its time, Sazaye Maut weaves a taut tale of deceit and crime. The director’s eye for the genre is visible in the many mood sequences the film has. A corridor in a hotel. The way the camera pans up across a signboard that says ‘Elevators’ and cuts to a lift opening on another floor. The discordant ring of a telephone. A long verandah at the end of which sits a man reading a newspaper. The way the camera caresses the vistas of the barren hills that make the Western Ghats. The twist of the trusted friend turning killer and the twist within that twist. It is minimalist and it is effective.

Khamosh is a much more accomplished work, the effort of a director more sure of himself, and yet somehow more bitter too. Using the structure of a film within a film, and in the guise of a murder mystery, the director here is rapping the film establishment of the era on its knuckles for its creative and moral bankruptcy. The film within the film is titled Aakhri Khoon – a throwback to the B-graders that Bombay churned out at the time. Its stars – Amol Palekar and Shabana Azmi, called Amol and Shabana ‘off-screen’ – play Vijay and Nilofar, the former a city dweller, the latter a native of the hills who worries he will forget her once he returns to the city (a hoary Hindi film trope that was part of the year’s biggest hit, Ram Teri Ganga Maili, too). The dialogues they are given to mouth – ‘Woh bechari uske bachhe ki maa banne wali hai’, ‘Main tera khoon pee jaunga’ – are age-old Hindi-film cliches associated with a million mindless masala mixtures.

Then there’s the director who changes a scene involving a suicide into that of a murder, even as it is being shot. A satirical comment on an era where scripts were written on the go as per the director’s and star’s whims. There’s also the sleepwalking heroine, Shabana, moving across the grounds of the hotel where the unit is putting up – you almost expect her to break into a haunting song, like the celebrated ghost-women of Hindi films.

And then the murders start stacking up. Which provides the filmmaker (of Khamosh, not Aakhri Khoon) to comment on the workings of the industry. The lecherous producer dressed in white (Ajit Vachani) who can make or break a girl’s career depending on her willingness to sleep with him, and his drug-addled brother (Pankaj Kapur), both lusting after the same girl. The cameraman (filmmaker Sudhir Mishra) who hints to the aspiring actress, Soni (Soni Razdan), at the importance of keeping the cinematographer happy. The ambitious mother, a has-been extra (Sushma Seth), who will do anything to get her young daughter a leading role so as to vicariously live the stardom that passed her by. There’s the total lack of compassion – after the first death rocks the unit, the producer tells the director: ‘We will mourn tomorrow and resume shooting the day-after.’ And there’s the rape scene, a staple of the films of the time, shot in a manner that highlights the sleazy side of Hindi cinema, where an aspiring actress would be subject to the indignity of such exploitative scenes being prolonged, with the entire unit (and the intended audience) in on the intended titillation.

The director orchestrates all the elements, the actors (Amol Palekar walking away with the honours with his chilling final scene) and his technical crew brilliantly. Binod Pradhan’s cinematography (note the use of wide-angled lenses and colours to give the costume closet a spacious feel or the dramatic use of red filters) and Renu Saluja’s editing add layers to the film. Of special note is Vanraj Bhatia’s background score (assisted by Louis Banks) – the duo also composed the music for Sazaye Maut – which ramps up the ominous quotient.

Khamosh is a wonderful blend of style and content. There is a sprinkling of red herrings in the best traditions of murder mysteries (including the extra/magic bullet in the build-up to the climax – the gunshots too ring authentic, far removed from the ‘dhinchkaun’ that characterised the sound in films of the time). The filmmaker’s meta comments on – as a critic pointed out – ‘how not to make a thriller as also how to make one on a shoestring budget’ make this a film much ahead of its time. Vidhu Vinod Chopra was not done even after the film ends. As the story goes, narrated by Amol Palekar, Vidhu’s original version of the disclaimer at the end, ‘All the characters are fictitious’, read: ‘Amol Palekar is not a murderer and Shabana Azmi does not sleepwalk!’

For a man who cut his teeth with thrillers, it is intriguing that Vidhu never returned to the genre after Parinda. On the evidence of Sazaye Maut and Khamosh, Hindi cinema is poorer for that. One wonders what he would have accomplished with the resources – both financial and technical – at his disposal today.