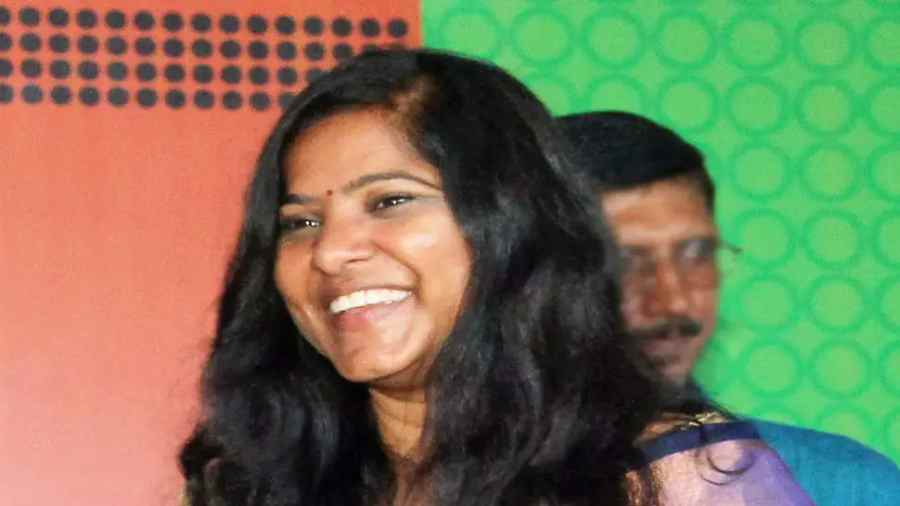 The Toronto-based director, who is in the eye of the proverbial storm over the poster of her film Kaali showing the goddess smoking and holding an LGBTQ flag, is also facing separate FIRs in Delhi and Uttar Pradesh.

As controversy swirled over the poster of the film, yet to be seen by most people, the embattled filmmaker termed Twitter's decision to pull down her tweet hilarious and asked whether the social media platform would also withhold posts by "hate mongers".

While Twitter pulled down Manimekalai's tweet on the matter in response to "a legal demand", the Aga Khan Museum in Toronto that was supposed to show Kaali at an event expressed regret and removed the documentary from its list of films being presented.

There were political ripples too.

On Wednesday, an FIR was registered against Moitra in Bhopal. The row over her comment on the goddess intensified with the West Bengal unit of the BJP demanding her arrest and Moitra daring the saffron party to "bring it on" and saying she was not afraid of its "goons".

She also said she was a "Kali worshipper and not afraid of anything".

A day earlier, when asked about the controversy over the Kaali poster, Moitra said she has every right as "an individual to imagine Goddess Kali as a meat-eating and alcohol-accepting goddess". Every person has the right to worship gods and goddesses in his or her own way, she said.

While Moitra's party, the Trinamool Congress, distanced itself from the comment and condemned it, Congress leader Shashi Tharoor said he was "taken aback by the attack" on her and urged people to "lighten up and leave religion" to individuals to practice privately.

Demanding her arrest, the Bengal BJP said it would move the court if no action was initiated against her in 10 days by the police.

Leader of Opposition in the West Bengal Assembly Suvendu Adhikari said hundreds of police complaints had been lodged against Moitra across the state.

@MahuaMoitra is awesome! More power to her voice! she said.

With her film grabbing headlines again, Manimekalai took to Twitter to respond to a news report about her post being taken down by the microblogging site.

"This is hilarious," she said.

On Saturday, the Madurai-born filmmaker had shared the poster of "Kaali" on Twitter and said the film was part of the 'Rhythms of Canada' segment at the Aga Khan Museum in Toronto.

"This Tweet from @LeenaManimekali has been withheld in India in response to a legal demand," read the message.

Kaali" was showcased as part of the 'Under the Tent' project at the Aga Khan Museum in Toronto.

Reacting to the row, the Aga Khan Museum said it "deeply regrets" causing offence to members of the Hindu and other faith communities and removed the presentation of the documentary. This was after the Indian mission in Ottawa urged the Canadian authorities to take down all "provocative material" related to the film.

Under attack for the poster, Manimekalai had on Monday said she will continue to use her voice fearlessly till she is alive.

"I have nothing to lose. Till the time I live, I wish to live with a voice that speaks what I believe without fear. If the price for that is my life, it can be given," she wrote in a tweet in Tamil in response to an article on the controversy.

The filmmaker had also urged people to watch the documentary to understand the context behind the poster.