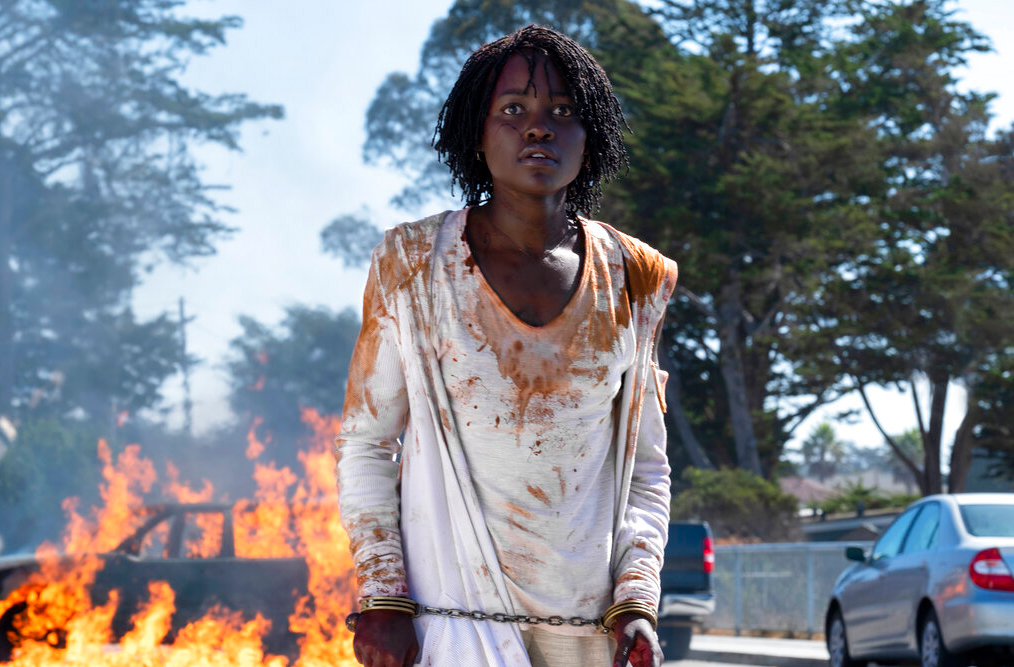 When she was around 11, Lupita Nyong’o’s parents brought home a cassette tape that changed her life. It was of the song Regulate by the West Coast hip-hop dynasts Warren G and Nate Dogg. Nyong’o and her five siblings, then living in a suburb of Nairobi, could only partially savour the lyrics of the song — a hearty, slang-ridden narrative of a thwarted mugging, topped with a soupcon of ceremonial group sex. But the music was hypnotic and evocative, suggesting an absorbing pocket universe. Nyong’o remembers wearing the tape out, rewinding it over and over until she knew all of the words by heart.

Of the many apparently effortless but difficult-to-emulate things the 36-year-old star of Us, the new psychological horror film from Jordan Peele, has done in front of a camera, it’s worth taking a moment to consider the rapping. She’s done it twice, both times in videos filmed in the back seat of a car and posted on Instagram: the first to celebrate her three millionth follower and the second with her Black Panther co-star Letitia Wright, on the week of the film’s premiere.

No one would call Nyong’o the next Warren G, but something about watching her rap disturbs an inner accountant. Here is a person whose very first appearance in a feature film, as the unforgettable Patsey in 12 Years a Slave (2013), made her the seventh black woman and first black African to win an Academy Award for acting; a person whose doll-like facial symmetry and frictionless skin has landed her four solo appearances on the cover of Vogue; a person who speaks four languages and holds a graduate degree from Yale.

And this same person, wearing dark sunglasses and facetiously calling herself Troublemaker, reveals that she also can rap, with appropriate levels of insouciance and conviction, and while remaining on beat. One suspects the divine dealer of dereliction of duty.

Nyong’o discussed her hip-hop hobby on an afternoon earlier this month in Austin, where she had come to the South by Southwest film festival to unveil Us. Like the rap videos, her foray into horror represents both an abstention from, and an implicit critique of, the Hollywood playbook for stars of her pedigree. Though she has been deliberate about creating a space for herself in an industry that wasn’t built for her, inhabiting and defending that space is another matter. Nyong’o’s performance in Us, already earning ecstatic reviews, is a shot across the bow to anyone who would deny her her due.

It was overcast and humid. But we caught a breeze on a digressive walk around Lady Bird Lake on the edge of downtown. Nyong’o, who was dressed for an earlier panel discussion in a gray and black gingham pantsuit, black heels and matching round sunglasses, was trailed by two barrel-chested bodyguards, who kept a wide berth at their client’s polite but firm insistence. As we wound between naked trees down a semi-paved path, more than a few rubberneckers shot her adoring grins and sheepish waves.

Her normal life is much lower maintenance. She’s lived in the Fort Greene neighbourhood of Brooklyn for several years, having opted to stay on the East Coast after school, and spends quiet weekends going to the farmer’s market, or to local restaurants, where, she said with relief, “New Yorkers are too busy to recognise people.”

But such normalcy grows scarcer by the day. Nyong’o spent much of the last two years preparing for, shooting and promoting Marvel’s Black Panther, in which she played Nakia, an idealistic Wakandan spy and the hero’s love interest. The film’s worldwide success may turn the Oscar-winning actress into a blockbuster heroine, a rarefied combination that Us is positioned to affirm.

In it, she plays both Adelaide, the matriarch of the charming Wilson family, and Red, her bloodthirsty doppelganger. Peele wrote the characters with Nyong’o in mind, and the two were close collaborators on interpreting the script. They met for the first time shortly after Nyong’o wrapped Panther (during production of that film, the actress and lifelong horror fan organised a cast field trip to see Peele’s surprise 2017 smash, Get Out) and quickly hit it off.

“He was really inviting of my thoughts and ideas,” she said. “He’ll have this kernel of an idea that is so strong, and then he’ll keep adding to it and clarifying his intentions as he goes along. When he cast me in the movie, I joined him in that process.”

In an interview, Peele said he was grateful for the second pair of eyes. “Right out of the gate she was asking questions about the characters that I didn’t know the answer to — and I knew everything about them,” he said.

In the film’s story, as carefully as it can be described without spoilers, Adelaide embarks on a beachside vacation with her husband (fellow Black Panther alumnus Winston Duke) and their two children. It turns cataclysmic when another family of mysterious origin — their mirror images, but as filtered through a particularly ghastly nightmare — shows up on their doorstep.

Another prompt indicated that Red had a scratchy voice, as if withered from lack of use. That seed — contained in a single sentence on the page — was fertilised when Nyong’o attended a fashion event where, to her surprise, she heard a speaker whose voice she thought sounded close to what Peele was describing. The speaker was Robert F. Kennedy Jr., who has spasmodic dysphonia, a neurological disorder that causes involuntary spasms of the larynx. In the film, Nyong’o’s hair-raising performance is defined by a haunting amplification of the disorder, which sounds like what might happen if you swallowed a cheese grater.

Nyong’o’s set debut in costume as Red, for a long, unbroken monologue that fills in the character’s life story, was one of the most dramatic moments of the shoot.

“She walked into the room and you just felt the air suck out of it,” Peele said. “The first time she did that scene was magic. I think we shot it like 10 times — just because we could — and it was always gold.”

On the trail in Austin, Nyong’o was recalling how she fell in love with acting when something — someone — broke her focus. It was a large man in a faded T-shirt and white earbuds walking behind us, talking so loudly that we were struggling to hear one another. Nyong’o stopped and turned around. As the man passed by, she gave him a look of such elegant and devastating ferocity that I thought he might evaporate mid-stride, leaving only the earbuds behind. The bodyguards may not have been necessary after all.

Her aunt had been a theatre actress in Nairobi, and Nyong’o’s siblings and cousins would perform short skits at family gatherings. Acting was a way to win attention from (and manipulate the emotions of) her mother and father, who defied the stereotype of African parents by encouraging their children to pursue their passions.

Both accompanied their daughter to the Us premiere. Nyong’o’s father, Peter, is a politician and the governor of Kisumu County in Kenya. As a young college professor and critic of former President Daniel arap Moi, he temporarily exiled himself and his family to Mexico City, where Nyong’o was born and given a Spanish name inspired by their adopted home. Her mother, Dorothy, is a public relations consultant and the managing trustee of the Africa Cancer Foundation, founded by her husband.

Nyong’o credited her mother in particular for her self-confidence. “She’s dignified in the things she knows, and she’s dignified in the things she doesn’t,” she said. “She’s not afraid to admit that she has something to learn. And that quality is something that I seek to emulate -- to be able to be comfortable in the discomfort of not knowing, or the feeling that you’re unprepared.”

Us is only Nyong’o’s fourth live-action appearance in a film since her debut, and as a lead actress, she is still learning how and where she wants to apply herself. Many in her position would accept as much work as their schedules would bear, fearing the laws of gravity that can bring Hollywood prodigies abruptly back to earth. But here, too, Nyong’o has defied expectations. She believes her creativity is a finite resource and doesn’t offer it easily.

“I’m not creative all the time, I’m just not,” she said. “Each role depletes me in some way, and I know that I do my best work when I’ve had time to remain fallow.”

Being selective has meant saying no to star vehicles that other actresses would relish. After she won her Oscar, Nyong’o was approached to headline the American remake of the Mexican action thriller Miss Bala, but ultimately decided not to move forward with the project. (The film was released last month starring Gina Rodriguez.) 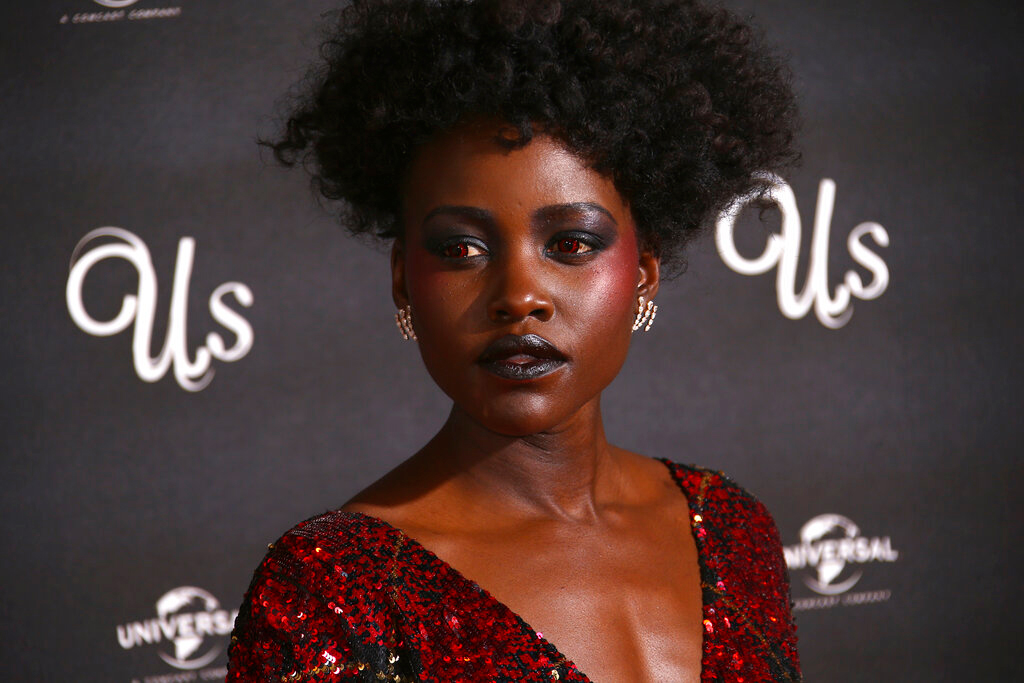 Lupita Nyong'o poses for photographers at the premiere of 'Us' in London on March 14, 2019
AP

“I just realised that whatever I’m interested in didn’t fit into the story, so I chose to bow out,” Nyong’o said. “I didn’t feel like I had the right perspective for it.”

Her awareness that few historical models exist for female movie stars of colour, particularly those with dark skin, has made her especially mindful of the example she is setting.

With Black Panther, Nyong’o was part of a seismic shift away from whiteness as the unquestioned default in American popular cinema. Us, in which the race of the central characters — though affirmatively black — is never depicted as remarkable, gave her a chance to take that shift a step further.

“It’s really not exceptional to be black, or to be African, and I think that’s a powerful statement in and of itself,” she said. “We can be seen and perceived as part and parcel of the global experience, because that is the truth.”

In Austin, where the sun had finally emerged, we left the lake behind and turned toward downtown, where Nyong’o was due at her hotel to get dressed for the Us premiere later that night.

Before we arrived, she told me a story about a time when she still felt beholden to the expectations of others. It was by way of explaining her excitement over another creative coup, as both producer and star of a coming mini-series adaptation of the novel Americanah, by the Nigerian writer Chimamanda Ngozi Adichie.

As a young, Kenyan-Mexican actress living and working in America, Nyong’o said she had made a habit of suppressing her accent, a natural composite of the places she’s lived.

“I was only speaking in the American accent, because my feeling, and the feeling that was communicated to me in school, was that having an African accent would limit your possibilities,” she said.

After she wrapped 12 Years a Slave, newly facing the prospect of a public life, the inauthenticity of her voice became a source of anxiety. Encouragement came from a novel Nyong’o was reading at the time, Americanah, in which the main character, Ifemelu, is a Nigerian immigrant who also attends an Ivy League school and also has given up her natural tongue.

Burdened eventually with shame and regret, longing to be seen — and heard — as her ordinarily extraordinary self, Ifemelu giddily repents.

“I remember I was on the subway when I was reading that,” Nyong’o said. “I just wept.”