Globe, the only hall that ran English subtitles to the film, saw a full house for four weeks after the film's release 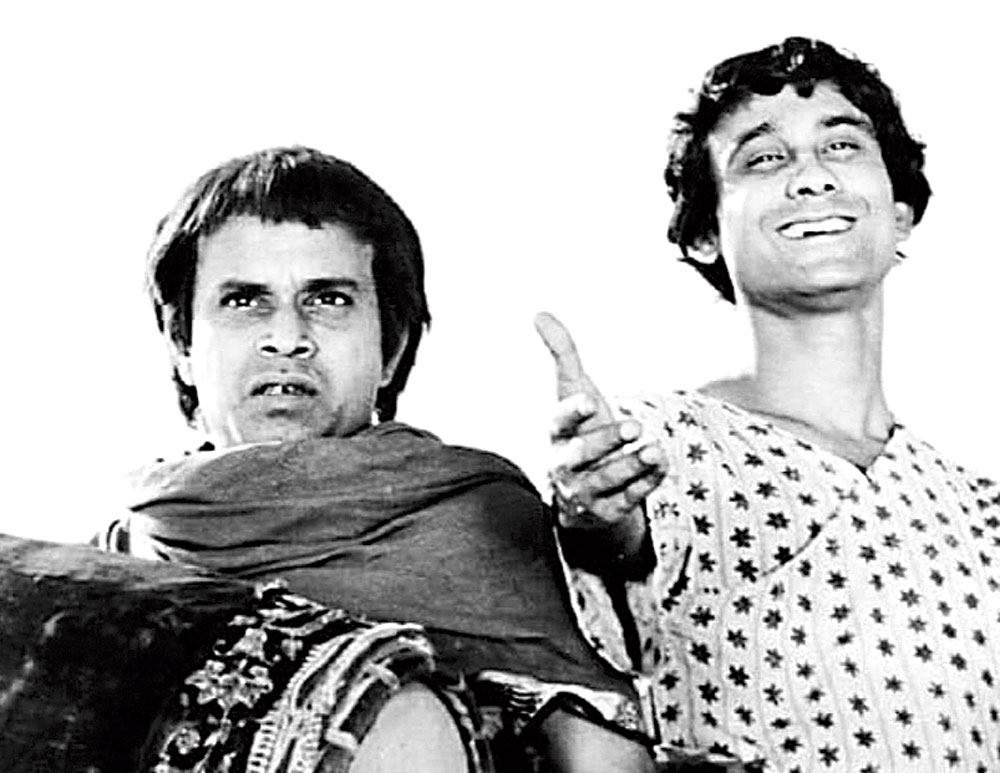 That Goopy Gyne Bagha Byne is about two tone-deaf musicians, Goopy and Bagha, is well known. What is little known is that the story was written not by Ray, but by his grandfather, Upendrakishore Ray Chowdhury. Says Sandip, “It has been widely reported — I don’t know why and how — that I had compelled Baba to make a film which was less grim, and that is how he came to make Goopy Gyne Bagha Byne. It’s completely wrong. It had been one of his favourite stories and he had always wanted to film it. I played no part in the initiation.”

The film was released across Calcutta in 1969, in Minar, Bijoli, Chhabighar and Globe cinemas. Globe, which was apparently the only hall that ran English subtitles to the film, saw a full house for four weeks; the other three screened the film for 33 weeks.

Ray made changes to the original storyline. Take for instance the iconic scene wherein Goopy and Bagha get three boons from the bhooter raja or king of ghosts. In Upendrakishore’s story, the wishlist ran thus — note the order of priority: musical acumen, a ready supply of food and clothing, and the wherewithal to travel anywhere, anytime. Ray changed the sequence, prioritising stomach over all else. He brought up food and clothing; music came second; and travel, third.

The dance sequence by the ghosts comes up — the six-and-a-half-minute performance that is really a parade of Bengal’s class hierarchies. The culminating shot shows the four classes, each forming a row, placed one above the other. The priests are at the bottom and the common people at the top. That must have been to send out a strong message, no? Sandip nods his head from side to side. No, he seems to be saying. Much has been said about the film’s inner meaning, its anti-war message, about it mirroring the Sino-Indian tension, its commentary on the babu culture. Says Sandip, “Baba used to get upset with critics who would go on interpreting each and every thing in the film. He used to say — ‘I didn’t think so much while making the film’.”

The project, which began in 1966, ran into rough weather initially and Ray had to shelve it. “Later, Purnima Pictures chipped in and finally, the film was released in 1969. It proved to be a grand success,” says Sandip. He adds, “I still regret not being able to accompany the crew during the shooting in Rajasthan. But I was there during the shoots at Siuri, Bolpur and Hetampur.”

Sandip talks about how deeply Ray was involved in the firm’s pre-production, right down to making the cap and spectacles of Barfi, the crooked sorcerer in the film. Anup Ghoshal, who did the playback, tells The Telegraph, “You may all regard Ray as one of the best directors in the world, but in my opinion he was also one of the greatest composers the world has ever seen.”

He elaborates, “Throughout the trilogy (Goopy Gyne Bagha Byne, Hirak Rajar Deshe and Goopy Bagha Phire Elo), he has applied classical music at its best. Be it Hindustani classical, Carnatic music or folk tunes — each of these has been composed in such a manner that the songs still remain fresh in our heart and memory.” Even the opening song, “Dekho re nayan mele” is based on Raag Bhairavi.

In these times, one scene from the film comes to mind. A spy from the crooked kingdom of Halla returns with an update for the prime minister about Shundi’s war-preparedness. Shundi is the kingdom of the good. “They have nothing, no arms, no line of defence,” reports the spy. The disbelieving minister asks, “Then what do they have?”

The spy replies, “Khete phashal aache, gaache phool aache, phol ache, paakhi ache, deshe shanti ache… The fields are heavy with crop, the trees laden with flowers and fruits, there are birds and there is peace.”