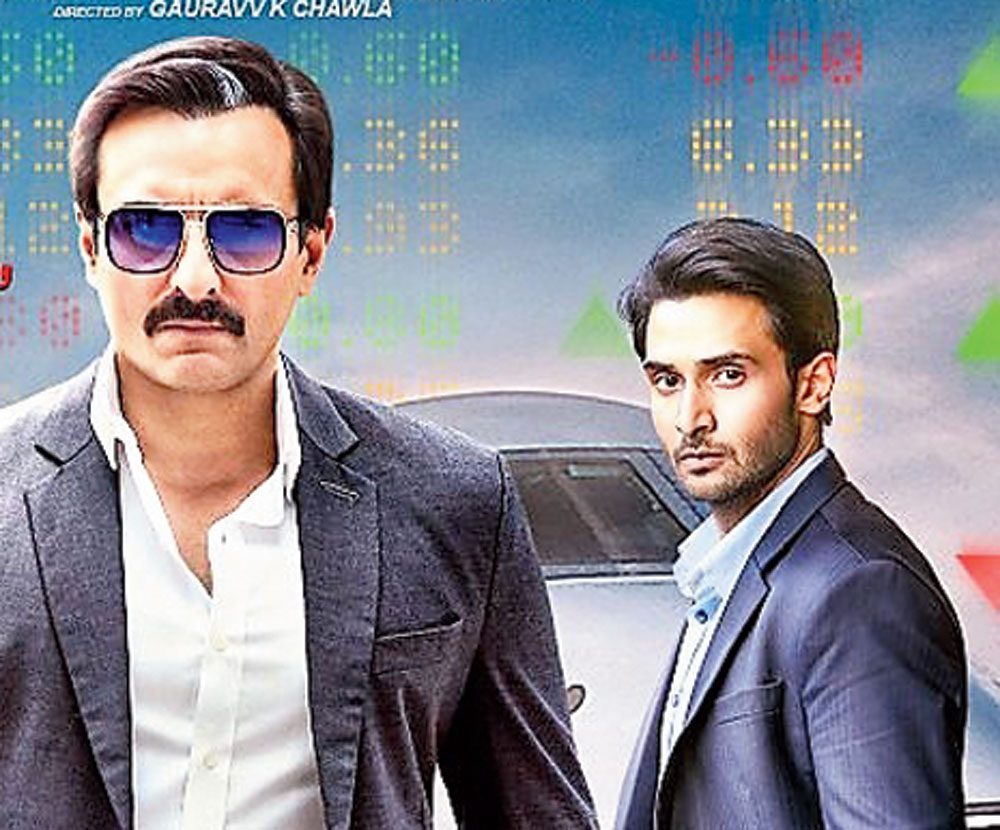 Things unfold at breakneck speed in Baazaar, a Wall Street meets Wolf of Wall Street “greed is good” tale, which starts off with a lot of promise but fizzles out in the last hour.

Borrowing generously from the Gordon Gekko-Bud Fox mentor-mentee dynamic in the Oliver Stone classic Wall Street — a gripping look at the method and machinations of the American stock market — Baazaar shifts the action to the frenzied corridors of Mumbai’s Dalal Street and remains watchable for the most part, all thanks to a strong central performance from Saif Ali Khan.

Saif is Shakun Kothari, a share market shark who’s earned a dubious reputation based on hostile takeovers and underhand deals. In a powerful introduction scene, Shakun unscrupulously snatches a family business built over generations from a rival, without letting that steely smile slip. This is Saif’s most intriguing character since Omkara’s Langda Tyagi and he makes it a compelling mix of a cold-blooded businessman and an emotional family man.

Juxtaposed against Shakun’s gradual dominance in the business world is the quick rise of young trader Rizwan Ahmed (played by debutant Rohan Mehra). Arriving in Mumbai from Allahabad “not to struggle but to settle” — a line repeated frequently in the film — Rizwan wins his way into one of the city’s biggest brokerage firms, cracks deals at the snap of a finger, acquires a girlfriend in his morally ambiguous colleague Priya (Radhika Apte, who scores with yet another strong performance) and finds himself impressing Shakun enough to start working closely with him.

Rizwan’s shift from a dilapidated room in a chawl to the top floor of a highrise overlooking Marine Drive may be heady, but writers Parveez Sheikh and Aseem Arora are in such a hurry to tell their story that the situations often feel manipulated and the plot twists contrived.

It doesn’t help that Rohan — son of actor Vinod Mehra — is a little rough around the edges and lacks the charisma that this character demanded. Moreover, choosing him as narrator — he often breaks the fourth wall to speak directly to the audience — doesn’t always work. Chitrangda Singh, playing Shakun’s wife Mandira, is stunning, but is saddled with a half-baked character.

Baazaar works as a cerebral thriller, with many sequences in the first half — revolving around insider trading to manipulation of share prices, frenzied buying and selling to smooth company mergers — keeping you hooked. However, some of it plays out in a predictable loop after a while and the film ends up as a cautionary tale without saying anything new about the vagaries of human greed.

What keeps you invested are some moments, most of which involve Saif. There’s a sparkling scene of Shakun’s run-in with a disgruntled SEBI officer (played by Manish Chaudhari) and another where Shakun talks about flying high but always staying rooted, even as he digs into a tasteless thali at a shabby eatery when he could well afford a Michelin-star meal anywhere in the world. Saif is in top form; too bad we aren’t betting any bucks on Baazaar.