‘One love’ cried fans as U2 wowed thousands

The band's first-ever India concert won hearts and made memories 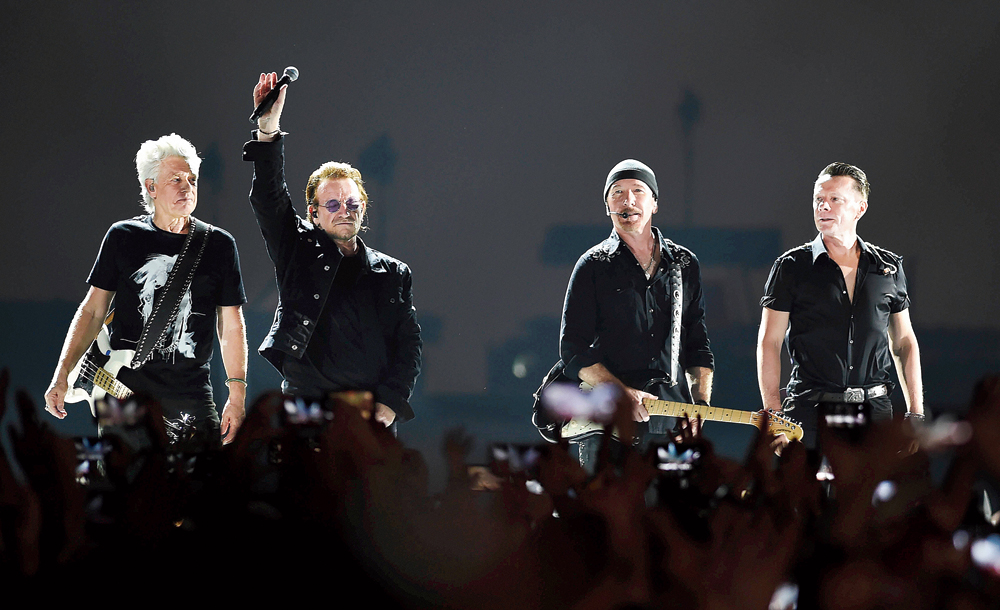 Namaste Mumbai and thank you for your patience — it took us only four decades to get here!” were U2 frontman Bono’s opening words to a packed DY Patil Sports Stadium on Sunday night. And indeed the 43 years since the Irish band first formed, they have firmly gotten fans spanning continents and age groups under their belt, testified by the demography in attendance at the Navi Mumbai address. However, the thing about listening to a band like U2 through the years is that it has long transcended the trappings of listening to their latest hit and is more about revisiting a timeless era of rock, and most importantly, with music charged with political consciousness. Thus, even if it has been a wait for four decades for some, it’s always a good time for a band like U2 to start writing a new chapter in newer realms.

With Mumbai being the last leg of the Irish band’s The Joshua Tree Tour 2019, rumours were rife about who the opening act would be. So when the band directly took to the stage with Sunday Bloody Sunday, it was a pleasant surprise of sorts for many still scrambling to find their seats. Spectacular visions, the ever-familiar Joshua Tree iconography and amazing sound made up the unusually long set that U2 played, which wasn’t just limited to their seminal 1987 album and continued for almost two-and-a-half hours before lights out at 10pm.

While the band got the audience warmed up with songs like Pride (In The Name Of Love), I Will Follow, New Year’s Day and Bad, the crowd expectedly did a singalong to Where The Streets Have No Name and With Or Without You. Bono often pitched in with his harmonica, especially to bring Running To Stand Still to a fitting climax. Things got edgier with The Edge amping it up for Bullet The Blue Sky, while 59-year-old Bono’s spectacular vocals won the show with Every Breaking Wave, that had only Edge on the keys. Concert favourites such as Elevation and Vertigo were also a part of the set, the encore, with Bono appearing for the rock segment in a showman’s avatar in a glittering jacket and top hat; while an edgy monochromatic live stop-motion feed made up for the absence of a continuous live feed.

Where there is U2, there is always a message beyond the music. While Gandhi’s ahimsa was a mainstay, coinciding with their song Ahimsa in collaboration with A.R. Rahman, Bono also went on to say at one point: “Let’s make this prayer in the dark: all we are saying is give peace a chance,” before launching into an interlude of Give Peace A Chance, circa John Lennon and Yoko Ono’s Plastic Ono Band, in stark irony to what was unfolding in the north of the country around the same time.

A special ‘Herstory’ segment set to Ultra Violet saw an AV play out with the names and faces of some of the biggest female change-makers in the world, with the crowd cheering on names like Gauri Lankesh and Greta Thunberg, while the appearance of a certain Indian politician proved a sore spot for many. However, it was the message of peace that prevailed as Rahman took to the stage with U2 at the end, with his daughters Khateeja and Raheema, to perform Ahimsa, which was specially recorded for the band’s visit to the city.

But speaking purely from a personal perspective, perhaps the best-kept secret was former Oasis man Noel Gallagher’s presence in the city, as he sauntered on to the stage with an acoustic guitar, joining the Irishmen in singing Desire — no amount of careful scrutiny of the High Flying Bird’s opening act for the Irish band elsewhere could have prepared the Mumbai audience for this!

The spontaneity of the entire set was an easy reckoner, especially when Bono suddenly sang out the chorus of Joan Jett & the Blackheart’s I Love Rock ’n’ Roll for the crowd to sing along to (which they did), but soon faltering at the Ramones, making Bono laugh out saying: “The Ramones anyone? Check them out will ya!”

Being a fan of a band for as long as the almost-50,000 people at DY Patil Stadium on Sunday have been, we are surely well aware of every Google-able detail about the band as possible. However, being witness to their banter first-hand is quite something. So, when Bono took a break from the set and introduced his bandmates, it was a gem to see each one react to their introduction by the frontman. For example, for bassist Adam Clayton, Bono said: “Here’s a man who fell hopelessly in love at the young age of 50 and after having bossed us around for years, he is now happily being bossed around by his two-and-a-half-year-old kid!”, at which Clayton broke into laughter himself. Drummer Larry Mullen Jr had a tougher task when Bono asked him to say what he thought about India, but passed with flying colours when the on-stage camera zoomed in on the back of his T-shirt that was inscribed with the date of the concert and Mumbai written in bold as he quickly turned around and waved at the camera straight ahead.

The night ended with a full moon rising above the Western Ghats, which trace their beginnings to the topography around Navi Mumbai’s Nerul and is clearly visible from a section of the D.Y. Patil Stadium stands, as the band launched into One as their last song. As a tricolour flashed on to the huge horizontal screen across the back of the stage, Rahman and his daughters joined in for the rendition as the band bade farewell to Mumbai and to their The Joshua Tree Tour 2019.

“Hold out your hands… tonight”, tweeted U2 a day before their Mumbai gig. And, boy, oh boy, did we do that, as the legendary band sang their hearts out for us!