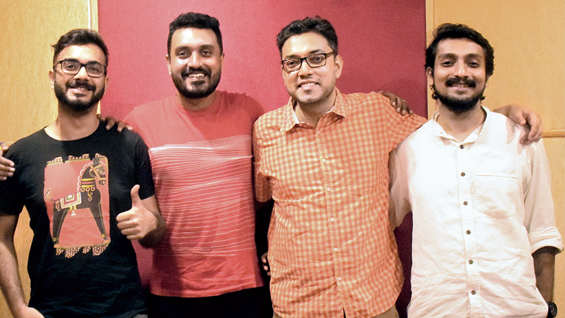 Heart-warming to heartfelt to uplifting — the soundtrack of Koel Mallick’s film Rawkto Rawhoshyo comes across as a breath of fresh air. Music directors Nabarun Bose,  Debdeep and director Soukarya Ghosal decode the tunes...

Tell us about your friendship and collaboration with Soukarya. What is the creative process like?

This is my third film with Soukarya as music director after Loadshedding and Rainbow Jelly. We share a lot of common interests when it comes to literature and films — we are both ’90s kids, we both share a deep love for the works of Satyajit Ray, and we often meet up to discuss films or books that we have recently been through — right from Tintin to Stanley Kubrick, we share a lot of common interests. So when it comes to working together, the creative process flows quite naturally. We start discussing about the music right from the beginning of the writing process. Songs are created as a part of the story to drive the narrative forward. The idea is to start living inside the story and to create a sense of familiarity with the characters, so that when the actual music scoring begins, we can approach the story in a more emotional way.

I have always been fond of Soukarya’s style of storytelling, and the first time he had read out the story of Rawkto Rawhoshyo to me, it had a massive emotional impact on me. While scoring the music, he wanted emotions, rather than thrill, to be the driving force for the film. We never really looked at Rawkto Rawhoshyo as a hardcore thriller; rather we looked at it as a story of a journey from innocence to experience.

How did you see the music shaping the film and how did you go about it?

Since the film looks and feels very real, we wanted to keep the music very honest, organic and at the same time it had to be grandiose, because the film tells a story where a personal tragedy transcends to become much more than that.
So we recorded all the instruments live. What you hear on the background score is a combination of different kinds of bowed instruments including cello, violins and esraj. We recorded two percussionists playing together to create that larger-than-life effect. I also used a lot of analog sounds, which you can feel more than you can hear.
The first theme that I had created for the film was the very melancholic Red Sweater Theme. That created the heart of the soundscape.The rest gradually followed.

How does the BGM elevate the visuals?

I have always believed that background score creates the psychological reality of a film. It is like a silent bridge of communication between the world of the film and the world of the audience. The job of BGM is to make sure that the audience feels sensitive towards the story they are experiencing.

How do the songs complement the story and take it forward?

Songs play a very important role in all of Soukarya’s films. I have composed three songs for the film and all three have been instrumental in driving the narrative forward. The song Mon phur phur sung by Prashmita helps build the story of the blooming relationship between Swarnaja (Koel) and Shammo (Chandan Roy Sanyal), it covers the entire span of their relationship.The title track sung by Timir Biswas marks the sharp change in the tone of the film and covers a major part of the investigative process, Kawthar kawtha sung by Iman Chakraborty is almost an epiphany which Swarnaja experiences at the climax of the film.

Debdeep’s songs have added depth to the emotions of the film, and the version of Ektara in his voice sums up the final conclusion in a very poetic way.

The songs are steeped in melancholia and are piano-driven....

That is perhaps because it is a very emotional story and the character of Swarnaja is essentially a very sensitive, empathetic human being whose biggest strength is her goodness and innocence. I feel the piano can bring a flavour of innocence to melancholia. Also, since I compose mainly on the piano, perhaps it’s the sound that helps me easily express emotions which are rather personal. That sense of empathy was needed to approach this particular character. Koel Mallick has delivered a phenomenal performance as Swarnaja. She has made the character so relatable and likeable, we wanted the music to complement the honesty in her performance.

Which is your fave song on the soundtrack and why?

That would be Kawthar kawtha. I think it’s one of the best lyrics written by Soukarya till date. The way Iman performed the song has added so much depth to the words and the melody.

How is the feedback on the music of Rawkto Rawhoshyo?

What was your takeaway from this experience?

Probably the fact that nothing can be a substitute for live recorded music, when it comes to scoring for the big screen. Of course, it depends largely on the story that you are scoring for, but for an emotional film like Rawkto Rawhoshyo, it requires real musicians, playing their instruments with real emotions to add depth to the psyche of the story.

Kawthar kawtha is a song which comes at a very crucial part of the film. The song is very close to my heart. I just wanted to reflect the classical concept of “Shawbdoi Bramha” which signifies the value of words, that is, we should be very careful about what we speak because words are heftier than pain sometimes.

Regarding background score, Nabarun and I always have a lot of discussions from the script level for every film we do together. For Rawkto Rawhoshyo we tried a lot of options and finally zeroed down to the current sound. Initially when I asked him that I want a Hans Zimmer-ish texture for the BGM in certain sections he immediately had a jolt! But after a lot of permutations and combinations we finally got what we were looking for. The most important thing about Nabarun is that he is always open to suggestions and goes by the narrative of the film. He is extremely innovative too. For the songs I can say Debdeep’s Ektara was in my mind while writing the script. I took the song rights much before the film was shot. Ektara male version, which Debdeep penned down, will always be among the best five songs I have heard in Bengali cinema.

There is an erosion of the flow of time... we are just a part of the universal system. The song Behaya batashey captures how we are reacting to the situation. It was a great experience working with Anupamda (he has sung the song). Meanwhile, the song Ektara was written almost 11 years ago. I would sing it at the college canteen. It feels really nice to have this song in the film now. I had a great time collaborating with Soukarya.